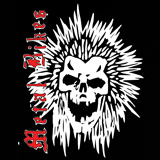 I grew up in Brixton, Streatham (both SW London) and the outskirts of Surrey. Been into BMX since I was about five years old. First bike was a Raleigh Boxer and I loved it because the bars were padded meaning you could go too far on an endo on the grass and not hurt yourself

I stopped riding when I was about 15. I then started again in 1996 and rode until 2000, pro street doing gaps and fire escapes etc. All pretty crazy stuff ! I was once sponsored by JAD who made the "I beam" frames and lovely 3pc cranks.

When I was 27 I met and married an American and lived in Woodstown NJ for five years (across the bridge from Phila and DE). We split, so I moved to MD to live with a friend for a while then moved onto OH to again live with a friend. I left the USA in 2008 and came back to West Sussex, right on the bottom of the UK aside the sea.