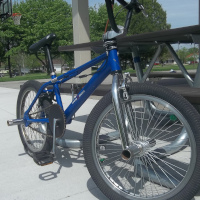 A flatland rider that likes mid-school and old-school bikes and tricks.