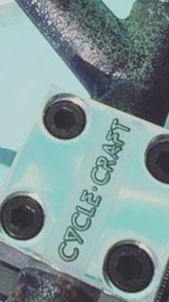 Bmx&lowrider bicycles for life! fell in love with BMX in the late old skool, early mid skool era, early 90’s. Threaded headsets, 7/8 seatposts, American bb & center bolt brakes were standard.
My stock seatgutz would be upside down inside seat if there’s room, and my stem pads were always wrapped around the back of the stem. Never liked stock seat gutz.
After a cyclepro shotgun frame found in the woods, pieced together from random parts, first decent bmx was a diamond back viper FW that I upgraded into a full custom race/dirt jump bike over time, constantly evolving, that first set of 3-pc GT profile cranks was the BIGGEST deal & last serious part needed to have a real pro level bike! Been pedlin ever since, so much more than just a hobby to me. Love old mid & new bmx, one love!
I’ve had s&m early dirtbke, still miss that one. Lbs had a custom built dirtbike on display, all the best parts of the time, I wanted that bike sooo bad but couldn’t afford it. Built my own over time. That’s when I also realized I had to have female hubs.
Had bully piston frame & fork, awesome looking frameset every tube unique, I blindly ordered one without seeing it, just the freestyle bully the shop had. I think it was chopper style front end & I didn’t like it.
Still have elf double cross with shortened seat mast/clamp area & sandblasted chrome finish. Painted it 1969 Pontiac dark green in auto body school, but scratched way to easy so I took it down to the titanium color of the sandblasted chrome.

Still have my tank mid 90’s Standard STA 500 powdered light grey-“modifing” was common & itz 3/8 dropouts were opened to 14mm. Cut seatmast. Bitd this was a good thing to some riders, we had no care for the future & worked with what we had. I probably took away most of it’s value from it when now I probably would have sold/traded it to fund my other bike. After reassembly it will be displayed in bmxmuseum with 1 1/8 S&M ditchfork, 1 1/8 redneck & Bullseye 3/8 hubs with Araya 7X rims & Profile cranks. Unfortunately I don’t have all the parts that were on it from bitd, but I’ll get it done. It’s next on my list & almost completed.
Had solid killing machine euro & fit aitken S3.5 frames.
Still have full S&M 1 inch front end waiting on a Holmes or Cycle-Craft xlx frame. Pitchfork with laser cut 3/8 dropouts, threaded, 1st gen redneck with wedgie jackson,slam bars & early padset I managed to hold on to since new.

Bitd I was giving stuff away for free or trade to my friends or selling old parts for cheap I had around to try & keep the whole crew ridin! Broke my share of parts also. Had no idea I’d have use for them ever again. Soo many bikes & parts I’ve had. I should have been hoarding! But the bike gods blessed me with my Block, so itz all good.
I started working as soon as I could because of BMX & and all available money went directly to my lbs. Raced for a year but was drawn to ramps, street, & trails.

Want a non-chrome Holmes or Cycle-Craft xlx frame, 1 inch & caliper brake.
A non-chrome Cycle-Craft 24 1inch headtube frame & fork & new S&M race bike to complete collection! Frames don’t need og fishish, just not chrome. Grew up with to much chrome. I still like how it looks & you can’t get much more durable, I had my fill though.

1969 20 inch flat black stingray lowrider with a heavy bmx influence one of my fav. OG orange 1977 20 inch stockish 3 speed internal coaster brake hub lowrider sunset orange Schwinn also.
I guess I’ll always miss a sun faded green GT performer 86? Frame fork bar & seatpost I have no idea what happened to it! Had a old grey dyno detour for a bit with mint paint .Had holmes NG also-red & heavy!
Oh and I want that Cycle-Craft 24 black with green splatter sooooo bad.
Eventually I want to assemble a rough timeline of a bmx converted stingray through old-mid-new bmx.
I wish I had my current bike back in the heavy mid days, I woulda been beastin it! I was a lot less injured then, but I can still fly my bike today!
Love BMX!!  Old-Mid-new & all those bikes stuck in between eras, rootz!