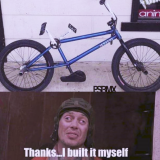 Started riding when I was 4 years old. My Dad threw a garden hose on the rear tire (no training wheels) and said, "now go ride".
That's how it started for me.
10 years later, he bought me a new Huffy Pro Thunder in a sweet midnight blue finish, and that's where things started to get real.
Broke the bars a year later ramping off of a ledge, then realized I needed a "real" piece to beat on!
My Grandma bought me a mid-late 70's Mongoose at a garage sale, and I was in business!
A little over a year later, I knocked my front teeth out trying to bunny hop 4 foot high (didn't put my frickin' helmet on that day).
The next few years were GTs, Redlines, Hutches, Free Agents, PKs, and Haros!
Only regret I have in ALL of that, no helmet that morning lol!