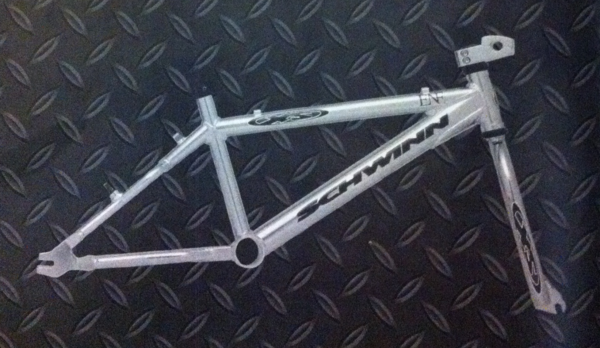 The year is 1994, and the newly formed Schwinn Cycle & Fitness is getting serious about building serious bikes again. Some of the world's best MTB, BMX, Vert and Flatland riders are being hired, but as far as the racing world was concerned, that iconic headbadge contained a huge oxymoron- Schwinn Quality. Undaunted, Team Schwinn led by the inimitable Foster bothers, started winning and winning big- on frames most would consider barely adequate for the intermediate ranks. Enter the lean and mean design team of ‘Schwinn’s Second Century’.

Design work on the ENF. began in spring of 1994 and continued through July in time to get the bike ready for its introduction at Interbike in the fall of 1994. Though his first BMX frame design, working with geometry provided by Product Manager Mark Pippin, Product Engineer Rich Adams knew where he wanted to go. Borrowing from their work on the new Homegrown MTB’s, he knew it would be aluminum (of course), so he spec’d a huge over-sized 50.8mm downtube for stiffness with tons of overlap at the headtube for strength, he included Schwinn’s newly patented Epicenter Stays for maximum braking power, and as Anodizing Inc., the company contracted to produce the frames for the ENF. (and several other Homegrown models) was famous for their custom aluminum extrusions, he designed an industry first one-piece bottom bracket/chainstay bridge- the ENF.’s standout feature. This unique approach served to reduce weight and increase strength, in addition to reducing production time.

Sold only as a Frame/Fork/Aheadset/Stem combo and advertised as “Pro sized” with a 21.25” TT and 15.5” chainstays, Schwinn’s new flagship BMX won the AMA Bike of the Year Award in 1995 and Brian Foster won Rider of the Year astride it.   The earliest 1995 frames received larger black SCHWINN downtube decals and block lettering for the ENF. decal and blue details, transitioning into the standard red downtube script and stylized ‘cuneiform’ ENF. script somewhere before frame #236.

Stress testing during ongoing development would soon discover a failure point in the joint where the two-piece seatstays joined at the tubular yoke. The designers solved this by welding two small triangular gussets where the yoke met the stays, but this would have not been cost effective during actual production. The solution? Another extrusion would be used to replace the tubular monostay and this both increased strength and simplified production. This change was late enough in the 1996 model run to appear to have only made it into production on the last ~130 frames produced (all cruisers, so far). One 20" prototype (PRO sized) frame has been found with the extruded bridge.

Although the 1996 Schwinn brochure still listed the ENF, it appears all 1996 frames shipped with Pro Modified decals. 1996 models included the unchanged ENF frame (now called the PRO XL), a confusingly named PRO model with a shorter 20.25" top tube found it's way into the line mid year, with 24” cruiser production entering very late in the run.

Several minor design changes were implemented for the 1997-99 models. The brake cable guides received welds on all four sides, the seatstays became a single tube looped into a 'U' shape (previous stays were two separate pieces joined in the middle) and a small gusset was added at the top tube-headtube junction.  Two versions of the 1997 sales literature exist- a small pamphlet offering what amounts to ENF. frames with tubular yokes and no TT gusset, and a larger version illustrating the finalized frames with the gusset, extruded monostay, the 20.5” TT PRO model and the Cruiser models, which also featured a 21.25 TT.  The 1997 models would become the only USA sourced BMX completes Schwinn would produce, available in the traditional Buffed finish and the new Black Anodized. For 1998 and 1999 the Pro Modified line was once again relegated to frame only available in Schwinn's famous Bass Boat Red or Cream (the Wuler-sourced 1 ¼” legged 4130 fork was now available separately). The PRO model with the 20.5" TT is now called the 'Junior' and a true Mini frame with a euro BB and 1" headtube is added.

The four models would continue into 2000-2001 with a redesign of the bottom bracket extrusion and extruded chainstays and seatstays which now blended smoothly into the "Ram Air" seatystay extrusion, and in keeping with the 'Signature Frames' theme of the rest of the Schwinn line are now called the "Matt Pohlkamp Pro Modified". Additionally an XXL model is added with longer chainstay and TT lengths of 15.8" and 21.5" (respectively) due to Matt's personal preference for the longer frames. Despite these updates, the basic geometry of the ENF/Pro Modified line would remain the same from 1995-2001.

Don’t know quite what you have? First step is to determine if you have a USA frame or an import. If your 20” has round chainstays and the extruded bottom bracket with the large rectangular hole it is a USA built frame, if it is a forged BB with a round drilled hole it is an imported frame.  Most (though not all) USA frames will have a serial number stamped inside the left rear dropout. Some will not however- it is still unclear what these unstamped frames represent.

The second step is that serial. The format is pretty straightforward-

The first two digits are the year of production, B denotes Anodizing Inc. (or A.I.’s code for Schwinn- indeterminate at this time) and 01/30 appears to indicate BMX. Note also that sales projections for the 1997 models appear to have been less optimistic than the other years- this is possibly a reflection of the near doubling in the price of the bikes when sold as competes- $750 for a Pro Mod 2 with one piece cranks or $999 for the Pro Modified 1 with 180mm Profile cranks and Whippet chainring vs. $399 for the ENF. as a F/F only, $430 cruiser.


A special note of thanks to Rich Adams for all his gracious help and cooperation in helping sort all this out. 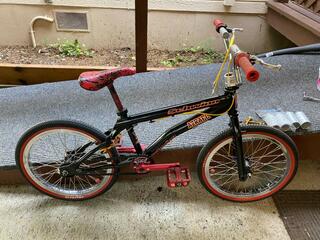 Thank you for all the research you've done to bring these frames into the light, I never would have found this info on my own and didn't even know where to look after fruitless attempts.

I found my first in bad shape and didn't even know they existed until then, then I started down the road of collecting one of each frame style, I'm almost there and have been so very lucky so far, it will be one hell of a collection when finished but I still owe a lot to your efforts. 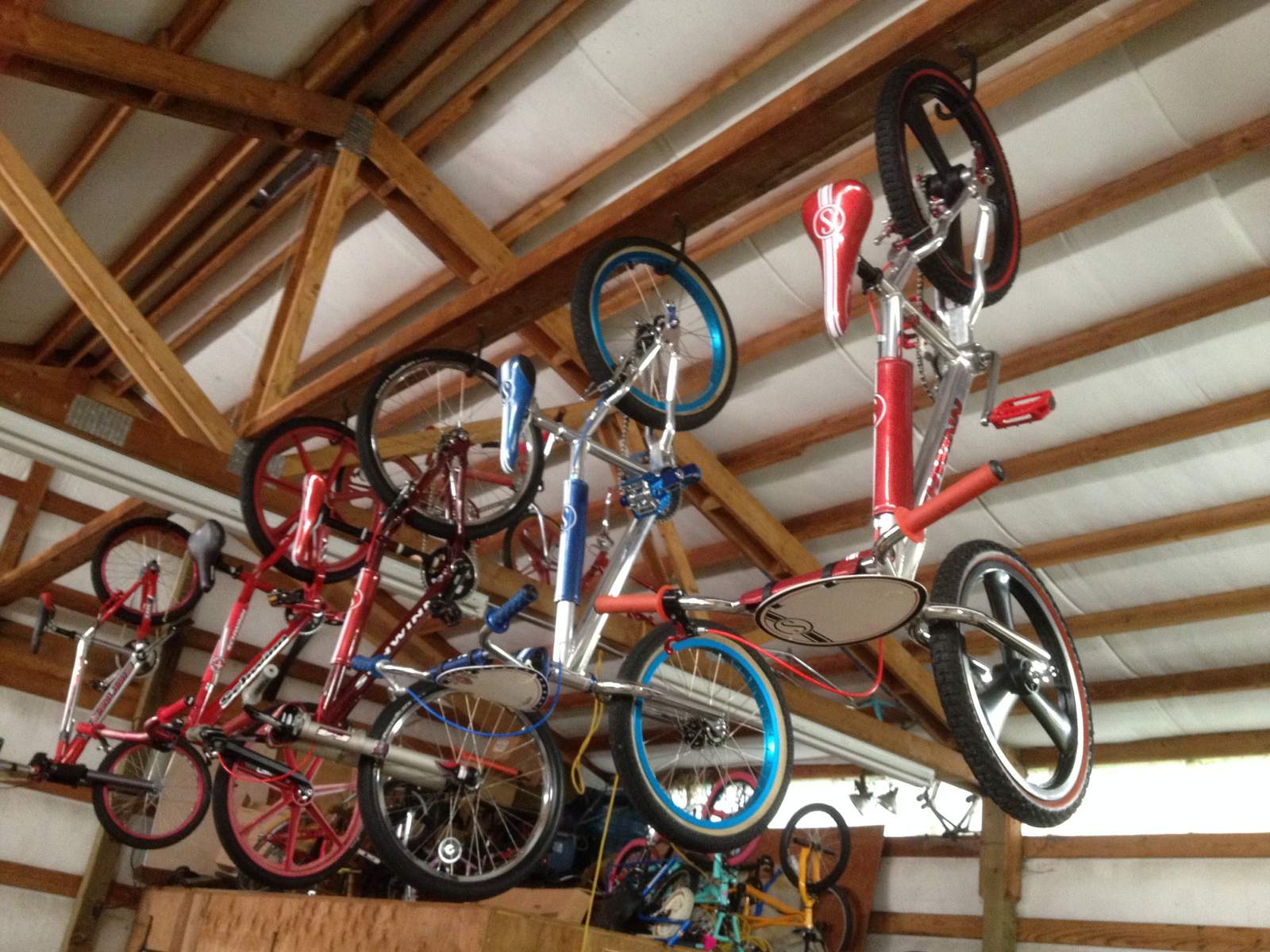 From what I have seen so far there were a total of only five frame designs during the entire production run in the 20 inch size.

The original factory racer from 1994 with the solid bar BB to chainstay bridge, made overseas but featured in Schwinn literature of which I own the only known survivor.

The 95-95 ENF/Pro Modified depending on manufacturer date.

The 2000-2001 model all in red with square/rectangular seat and chainstay tubing.

The 2002 Prototype of which during it's description on epay says three were built, it's not known at the moment if the other two are the same as mine or have differences, my frame has "Prototype A" engraved on the BB shell.

For a total (so far) of five distinct frame designs, my thoughts are that although the 94 racer is the same as the 95 production the solid bar at the BB/chainstay is enough of a difference to say they are not the same design.

The canti mount on the 97 being removed for 98-99 model is not enough to say it's a different design from those (IMHO).

There were three (known) designs for the 24 inch cruisers, the 96 with the stub seat stay bridge like the ENF/96 Pro Mod 20 inch, the 97-99 with the Ram Air seat stay and a new CNC carved BB TO chainstay bridge and the 2000-2001 all in red with the square/rectangular seat and chainstay tubing and the BB to chainstay bridge now a CNC design welded to the BB instead of part of it, the bridge is the same used in the 98-99 model and the Azrael freestyle frame and other Schwinn Homegrown mountain bikes

Add at lest one 24" Proto like yours with the solid chainstay bridge. Also you can now add '96 PRO with the 20" TT, and at least one '96 20" with the extruded stay must have been made as it's in the brochure with the 1996 copyright date (and/or serial are model year not calendar, which I don;t think is the case) still lots of room for this list to grow

I know there's a 24" Proto for the 2000 Pohlkamp (24") out there, but I don't know how much it might different from production models.

The 1996 copyright date catalog is in fact the 1997 catalog, look at the bikes, available in polished or Black Anno and as a complete bike.

The 1996 BMX catalog has a pic of a bare leg with a "Schwinn Quality" tatoo on the calf and kicking a donkey in the rear, I have all the years catalogs of the BMX line except for 94,95 and 96.

I'm stopping at the three 24 Pro Mod production bikes unless I run across any prototypes in the future as I still need to finish my 2000 cruiser but that's just some brakes and tires but I have a pair of 24 "Stingray" chopper street tires on it now and they may stay.

As for the 20" TT Pro Mod I already have the larger frame and that's enough for me, I may snag a Pro Mod Mini someday just for laughs though.

I can quit anytime

Yup, both brochures are "1997" models, just interesting that the photos used in the '96 print are the later frames, the '97 print are earlier frames. There have been some Pro Stock frames popping up with serials putting them as early as July 96, so it looks like the 1997 models just rolled out a little early.

I have a blue Anno Pro Stock 1 with a non ram-air seat stay tube, it's down from the rafters so I'll get back to you with the serial.

I also have a Predator SE in aluminum with essentially the same frame.

And a Pro Stock Team frame, that will be built and given to a kid locally.

And although it's a Pro Stock in 2014 I saw a frame on epay that was aluminum and badged as a Pro Stock.

It had been painted but I think was originally polished, it had the round stub BB to chainstay bridge like the Cro -Mo bikes but it was aluminum as you could see in the pics.

I saved a pic or two but now can't find where I put them in the thousands of bike pics on my desktop.

I thought about picking it up but thought "It's just an import frame" and I already had three of those.

I have just picked up what appears to be a 1995 XC ENF. The only confusion is that the extruded BB chainstay junction has a rounder hole and there is more reinforcing around the steerer/top/down tube junction. The serial is M6J 02455. Any ideas?

The M6 serial is a very early Pro Stock serial, not USA production.

The M6 serial is a very early Pro Stock serial, not USA production.