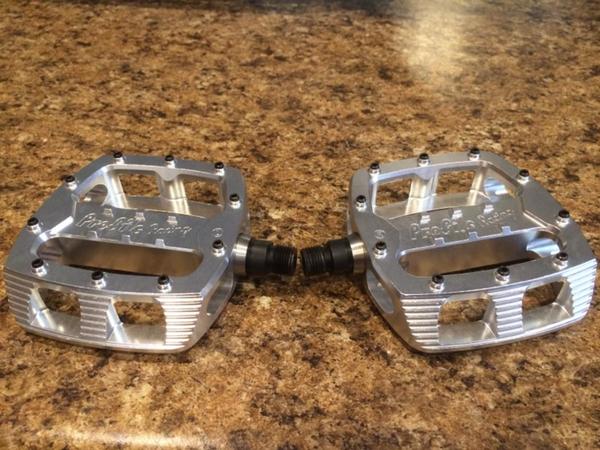 Sources for this References Page

After buying John De Bruin's 2004 Profile Racer XL bike (http://bmxmuseum.com/forsale/138683), I started Looking for a nice set of Profile Billet pedals.  Fortunately, a couple of months after I bought the bike, a decent pair of pedals came up for sale on eBay and I snatched them for $50.00 USD shipped

.  Since the pedals that I bought had blue anodizing on them, I plan on stripping the ano and re-anodizing them red.

DESCRIBING: These bad boys are made from aluminum and have jumping and thrashing in mind. They have sealed bearings and adjustable pins. The pins are also replaceable for all you pedal grinders out there. The axles are also something that can be replaced if you somehow manage to put abeat down on yours.

TESTING: The pedals were super grippy and would often keep our feet anchored to the pedals longer than we expected. It looks like a super big pedal but once riding them they felt perfect. They have great pin placement but be careful; they can be shoe eaters if the soles of your shoes are soft. The pins are adjustable up and down but we left ours at the height they came. We had to readjust out bearings once but after that we had no problems.

I felt bad asking Profile for a pair of Gas Pedals to try out. I mean these pedals cost over a hundred bucks, and that's not exactly chump change. Jeff Harrington at Profile was into it though, so I've been riding them for the past two months.

The Gas Pedals feel a lot bigger than my last set of pedals. The bodies are 3-3/4 inches x 4 inches, so it's a pretty big platform to stand on. The pedal body is CNC machined from 6061-T6 billet aluminum, and there are braces to keep the pedals from breaking in the front and back, which tends to happen with cheap pedals. The Gas Pedals come with eleven removable traction pins per side, so you can run them for tons of traction, or take some out if they feel too grippy.


The guts of the Gas Pedals are where things really get tech. First, the axle is 12mm thick, making it as strong as possible. Second, instead of having loose ball bearings, the Gas Pedals have three sealed cartridge bearings to keep them rolling smooth. Profile also added friction screws that allow you to control how fast your pedals spin. You can easily tighten them down or let them spin like crazy--it's up to you.

As far as how the Gas Pedals ride, I have no complaints. Originally I didn't put all of the traction pins in, and they still kept my feet where they belonged. I put a few more screws in the other day, and now I'm starting to like them with more grip. I installed the pedals no problems and haven't really had to think about them since, and that's how parts should be. Put in on and it works--end of story.

I plan on riding the Gas Pedals for quite a while. The only change I'd really make to the pedals is for the bodies to have a little bit of concave, but that's personal preference. Everyone I know who has tese pedals swears by the, and I really haven't heard any complaints. You have to be pretty serious about your bike to spend other $100 on pedals, but I don't think the Gas Pedals will let you down.--Losey

Since 1983, Profile had not made a pedal for its component line.  Sixteen years later it too the plunge, and our machine shop went all out.

The inception of the Iconic, Profile Gas Pedal hit our shelves in 1999.  Featuring a very time consuming (regarding machine time), tiered platform design, the Gas Pedal body was made to be near indestructible.

The original Gas Pedals saw a solid three years of production before they became too cost ineffective to produce.