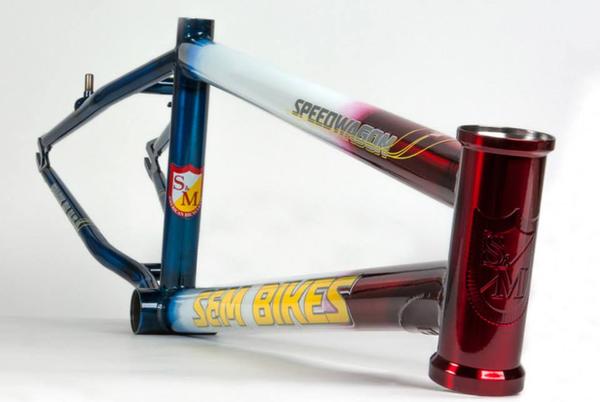 I decided to research and document the 2013 S&M Speedwagon frame because, shortly after getting back into riding trails with a yellow 1999 S&M Challenger XL, I decided to buy a used chrome Speedwagon on eBay ($70.00 USD shipped, 21" top tube).  I then unfortunately went over the bars and broke my wrist, so while recovering for the next six months, I decided to piece together my new bike (http://bmxmuseum.com/bikes/sandm/81237).  It turned out great, but the real kicker is that it honestly feels better than it looks!  The shorter rear end and lower bottom bracket are definitely noticeable and make it a lot easier to get the front end up for a much more enjoyable ride.  Here's a short video of me hitting Styles at Sheep Hills on 2/14/2016 (http://vid1202.photobucket.com/albums/b … rmyxt5.mp4).


Description:  "The 38 Special has been the industry-standard for Cro-Mo race frames since we brought it out in 2007. We've since, revolved, ahem, evolved it into our new-and-improved machine, the SPEEDWAGON. Lower stand-over height, increased size options, S-Bend chainstays and a shorter rear end, make the SPEEDWAGON the lightest and most responsive race frame we've ever made. Gentlemen, start your engines" (Source: S&M Bikes, 2014).


Trans-USA S&M Speedwagon: "Yeah yeah, I know it’s a race frame, but I’ve seen plenty of race frames in the woods. Hell I’ve even ridden one! So here’s a treat for all you racers and extra smooth people out there. S&M has added this bad ass trans red, white, and blue colorway to the lineup of colors that the Speedwagon is available in. I’m not sure if this is a limited edition thing or what, but I probably wouldn’t wait too long to pick one up if you want it" (Source: Jon at Can You Dig It, 7/17/2013).


Next Level BMX Review – S&M Speedwagon: "I recently made the change from a GHP to S&M’s new Speedwagon frame, but was a little skeptical at first because I had never ridden a chromoly race frame. When I first talked about it there’s always the “those bikes have too much flex” and “why would you ride something heavier” comments that always come up. Both raised some concern, but after I saw that translucent red color I was sold regardless of what anyone had to say. Here’s what I thought of the bike and there’s a full gallery below.

I went ahead and got the 21.5" top tube, which is pretty big considering I’m only about 5’7", but I like to ride a big bike. The front end is all S&M featuring Race XLT bars, stem, and forks. Initially I had 180mm Profile cranks, but I switched over to DXR’s (you’ll see why later in the review) with 44-16 gearing. For wheels I’m running a set of original Stealth hubs laced to Sun Envy rims on Maxxis DTH tires. That’s really all there is for important parts. The Speedwagon weighed in at just over a half of a pound more than my GHP frame. However, I didn’t take an overall weight of either bike complete to make a comparison. You can get the list of complete specs on the frame here.

Once I finally got my hands on the frame my dad and I put it together.  I’ve learned that after 12 years of racing no frame goes together easily. A huge plus was that unlike most aluminum frames, the bottom bracket threads went together with no problems. We didn’t even have to break out the tap to re-do the threads, which I’ve had to do on every single one of my past frames. The integrated headset made the front end assembly easy too.

The seat tube had to be honed out a bit. The seat post wouldn’t fit in the tube properly and we had to clean up the inside. Also, coming from an aluminum frame even if your seat fits you’ll need a new seat clamp due to the thinner chromoly tubes. The chain initially rubbed the seat stay with my Profile cranks running a 44-16 with a Stealth hub. This was mainly because I was still running a traditional chainwheel. I probably could have been fixed the problem with a spider and a chain ring combo, which would give the chain a better alignment and keep it from rubbing, but we just went ahead and got a set of DXR cranks. Sounds ironic to go from a aluminum frame with chromoly cranks to a chromoly frame with aluminum cranks, but it made the chain alignment perfect and smooth.

After a few laps getting used to the bike and taking it easy, I finally gave it some gas and let it fly over the doubles at Pearland BMX’s second straight. In the air, the longer frame was easy to control and surprisingly comfortable. I was most shocked when I first landed though. This bike was smooth. An aluminum frame has a much less forgiving feel due to the stiffness, but the chromoly Speedwagon has the perfect amount of flex that doesn’t give the rigid landing of an aluminum frame. This flex comes into play when you manual too. Even with the short rear end, the bike is much easier to keep on the ground during a manual than previous frames that I’ve owned.

But what about the flex out of the gate? I’m still asking that same question even after a few sprint and practice sessions. I don’t feel it. This is probably because I only weight 145 pounds and have never noticed any of my bikes flex. So you’re going to have to ask someone else about that if you want an honest answer.

The 74.5 degree head tube keeps the bike responsive, especially in turns. The frame itself isn’t very tall, with the seat just over tire height when slammed. I run my chain stay closer to the 15" mark and could effortlessly manual through all the rollers at Pearland’s rhythm. The integrated headset gives the bike a much cleaner look than most race frames with press in cups. Additionally, the cable guides allow for the cable and the housing to be continuous all the way to the brakes which adds to the clean look.

Overall, the bike is great. I haven’t been this stoked on a bike in a long time. I can’t say enough positive things, but if I used one word to describe the bike I’d say smooth. And everyone at my local track would agree that has ridden it. Plus, it’s an American made frame. How much more do I have to tell you to let you know S&M came through with a solid frame? I’d highly suggest it to anyone. Remember, steel is real.

You can order one at your local shop or favorite mail order for $399, or for an additional $50 get the chrome one.

.  I'm still not sure if I'm going to build it up (it's more of a memento from Orange County, as I've lived down here for the last six months for work), but it's a great looking frame that was made in Orange County

Thanks for the frame Gabe!

I bought a second 20" S&M Speedwagon frame last week (May 15, 2014)......  This time it was used (thank you random eBay seller), so I saved some money and will use it as my new trail bike (my 15 year old S&M Challenger will finally be retired).  My USA frame, mentioned above, will sit on the mantle alongside a chrome S&M Race XLT-T fork that I also bought new from Gabe Weed (http://gabeweed.com/).