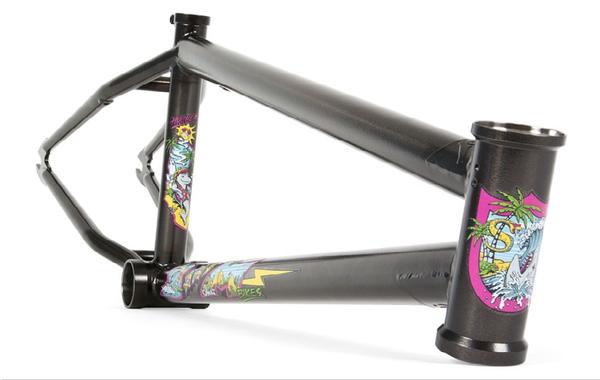 "You know that dude Hucker? You know? That guy that ain't afraid of double flipping mid run, or opposite 360ing the biggest set at any trails, or taking off of 20ft+ sets sitting down & no footed?
Or how about that time he did a hang five to frontflip?

Hucker is one of a kind, his riding speaks volumes & to top it off, he got the well deserved NORA cup dirt jumper of the year for 2012. Completely badass! This is the frame he chooses to do it on. So if you're looking for a frame that can do it all, really, really well - this is it" (Source: Back Bone BMX, 2014).


"Mike 'Hucker' Clark's Signature frame from S&M. Designed to Hucker's Specification this frame features a short 13.3" rear end and a steep 75 degrees headtube to make it ultra responsive. A simple design with a couple of gussets up front and bullet tipped stays all put together lovingly in the USA at S&M from Super-therm true temper 4130 Cr-mo" (Source: Source BMX, 2014).


"After winning Nora Cup’s 2012 Dirt Jumper of the Year Award, Mike ''Hucker'' Clark was granted with his very own signature frame from S&M Bikes. Hucker rides everything from dirt to ramps to street, so you know that his signature frame is built to handle it all. Like the rest of S&M’s frame lineup, the ''Hucker'' is handcrafted in the USA using only the finest True Temper SuperTherm chromoly tubing. Featuring the basic framework of the ATF but with a slightly longer chainstay, a lower bottom bracket height, taller standover height, bullet chainstay end caps, integrated seat post clamp, and top and downtube gussets with the upper having Mike’s signature ''Shaka'' logo engraved. Pick one up and maybe you’ll be in the running for a Nora Cup one day.....probably not, but at least you’ll be rolling in style with a top quality American made frame" (Source: Transition BMX, 2014).


p.s., I met Mike for the first time today at Sheep Hills

If you want a set of these decals, give Gabe Weed at Cheap Goods (http://cheapgoodsbmx.com/) an e-mail

S&M may have some extra decal sets as well, but check with Gabe first - he's an awesome guy