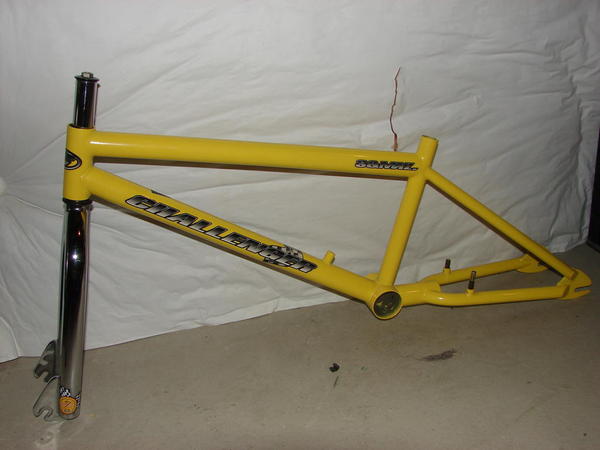 “Today’s Challenger frames are lightweight American made racing frames strong enough to ride at the trails.  Available in Pro and XL sizes with V-brake or 990 mounts” (Reference: 1999/2000 S&M BMX Catalog).

When S&M set out to build a new race bike, they did it right. The 1999 Challenger is completely redesigned from the ground up. The two people responsible for the design are S&M Bikes' owner Chris Moeller, and S&M AA Pro Timmy Strelecki-two guys who can dice in the pro class and bust out at the trails. Sheep Hills was where they tested their prototypes, and that's where we tested the production model.

Prototyping - Chris and Timmy spent about seven months developing the Challenger, and while S&M was itching to release this bike, they wanted to do it right. It's a good sign when companies are willing to put time and effort into the design of a bike.

Built Tough - At 399 dollars for the frame and fork, the Challenger is a no bargain-basement BMXer. The Challenger fits into a growing category of frames designed for both racing and dirt jumping. Consider it a dual-sport machine. The Challenger was designed to hold its own in all dirt applications, and it does. Our test bike came with Pitchforks because the new Challenger forks were not ready. The only difference between the two forks will be a thinner steer tube and different dropouts on the Challenger version.

Sizing - There are two sizes available, XL and XXL. The XL weighs 4.95 pounds and the XXL weighs a tad over five. For what it is build to do, the Challenger isn't very heavy.

Riding - From the photos you can probably tell Josh spent a good part of this test sampling soil. By the tim we were finished, however, he and the Challenger were getting along great. He got through rhythm sections with huge superman seat grabs, went big over a hip transfer, and could put the power on without fear of unwanted flex. Josh is used toa fairly heavy jumping bike, so the Challenger felt a little too light for him at first. Remember that our test bike did not have Challenger bars and forks, but rather the heavier Slan bars and Pitchforks. You can expect an even lighter package if you choose to set it up with Challenger parts. While not the very lightest of race bikes, the Challenger's weight is very reasonable for a dual sport.

Final Thoughts - If you are looking for a trail-tough bike that's light enough for competitive racing, this may be your ride. While $399 is not cheap, that's what quality frames cost these days. The '99 Challenger features legendary S&M quality and should take you to tracks and trails well into the next millennium.

TIMMY ON THE CHALLENGER

We caught up with S&M AA Pro Timmy Strelecki to get some feedback on the '99 Challenger. Here's what he had to say:

How much input did you have in the design of the new Challenger? - When I first got on S&M, Chris Moeller gave me a Holmes to ride. I rode that for a while and then we started talking about how we wanted to redesign the Challenger--I told him that I liked the geometry of the Holmes. Chris would come up with some ideas, and I would say "Yeah, that sounds good," so we came out with two or three prototypes before the final design. He wanted me to ride them for a while so I could tell him if there were any things I didn't like, or if there was anything that needed to be changed. It was pretty much a partnership.

Was the bike redesigned from the ground up? - Yeah, it's totally different. This one is a lot stronger than the old Challenger. We put a wishbone on the bottom (sort of like the Next Generation wishbone), gage it some new dropouts, and capped the ends of the rear triangle tubes. We wanted it to be a smooth looking, clean bike--nothing crazy. These days, simple is the way to go. The rear end is all .035 wall tubing, the front end is .049. It will be available in XL, which is what I ride, and XXL. You'll also be able to get it with 990s or cantilevers. I probably had a dozen people asking me if it was going to be available with 990s, so I ran it by CHris and he was down for it. The bike is sturdy enough to ride at trails, race it, or do whatever you want on it.

What are your three favorite things about the frame? - I really like the wishbone on the bottom. It's a different look, and it's really stiff. The frame looks really good too, and most importantly, it rides good. I've never had a problem with it--it rides incredible.

So you're happy with the way the bike turned out? - Oh, I love it! I couldn't be more satisfied. Even just knowing that I had input into the frame, it makes it even more special. I'm totally psyched to be associated with Chris and with S&M. It's a good team. And you know Chris, he's never made anything that's bad. All his parts, all his accessories and frames--they're all great. I think people with like it because it is a plane and simple chromoly bike. There is nothing crazy about it, and I think simple but functional sells.