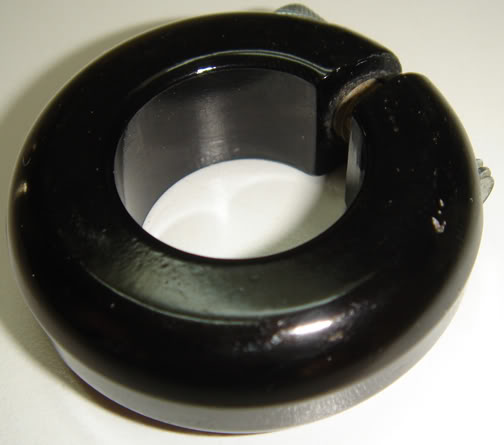 I've been trying to do some research about these clamps.... also trying to work on a timeline by style but the problem is that I've been finding some conflicting information.

Here's what I know:

-The 'donut' style clamp production started in the US before Hutch production moved overseas. The first ones had no stamping on the sides and the hole is in the middle of the donut.

-Later they switched to aluminum bodies and chromoly bolts but the same body design.

-After production moved overseas (around 1985) a version of this clamp came out like the one mobass posted above. The difference is the hole is off-set from the middle away from the pinch bolt, there was now a stamping of **HUTCH** on the sides and it had a nut ... made by Tioga.

-Somtime in here there was a version with the hole off-set from the middle, "Hi-Caliber" screened on the front and has a nut... made in Taiwan

-Later, there was a version that had the hole off-set from the middle but no stamping on it.

-Finally, 'Hutchins' clamps (once again made in the US) also had the hole in the middle and no stamp.

Here's where I'm confused:
-The version with the hole in the middle seemed to show up in catalogs even after production went overseas

Submitted by Hutch (View all 83 posts)

Thank you for your NIB pic. It shows they came with silver bolts