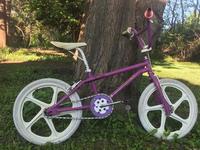 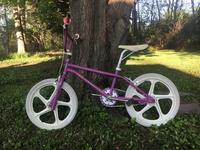 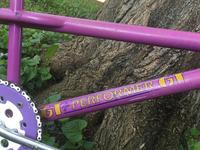 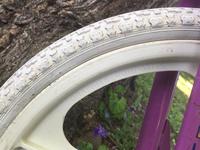 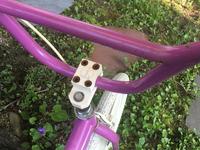 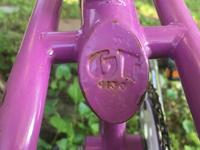 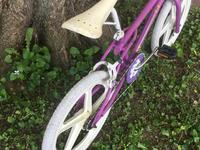 Found at a garage sale for $20

I was on my way to get a haircut back in the good old days Before the world went crazy. I was driving down to the barber shop but that day, I decided to take a different route down some country roads nearby. I saw a garage sale and out of the corner of my eye I spotted a white mag wheel. So I decided to pull in to check out what they had. I struck up a conversation with the seller who was a very nice older guy that was really into civil war memorabilia. I told him that I was on my way to the barber shop in town and just thought I would stop in and see what you’ve got for sale. I asked him what he was asking for the pink bike and he replied $30. I then stated that if I gave him $30 than I wouldn’t have enough money for a haircut and asked if he would take $20 for it to which he happily agreed and I handed him $20. We talked for a little while longer and I went on my way to get my hair cut. “Tell Ken that I said Hello” he said as I was leaving. Ken is the old barber that owned the small barbershop a few miles away that I went to. Gotta love small town vibes.

I do believe that this bike originated as a Frame,Fork and Handlebar set and was either built up by the shop that sold it back in the day as a complete Or whoever built it had very good taste in parts. This is about as survivor as survivor gets.

"It's such a fine line between stupid and clever."

Really cool survivor! It's an '85 btw. This color was not available in '84. Possibly a 12/84 manufacture date if the serial is on the dropout?

Great score. I can't even find a garage at a garage sale.

I don't like kickstand holes in a Mongoose matchbox.