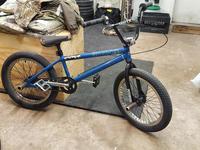 Pre-ordered the frame when I was 16 from bike n gear in Edison nj while I was working there. Just finished going through it after sitting for 15 years. Just built a set of primo pro cassette hubs on hula hoop rims for it, threw on a macneil ruben stem, t1 bars and grips, macneil 33t bashguard sprocket, primo half link chain and fly ruben tires.  Still has the original pitchforks i bought at the same time as the frame, 180mm profile 3 piece i bought new from staff mail-order, primo pedals seat post, seat, gorilla cup and t1/primo ramp pegs. Weighs in just under 40lbs.
Had this bike forever its been bombed down a bunch of hand rails parks and mini ramps a d its still going strong. Plan to beat the hell out of it for a few more years