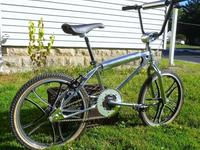 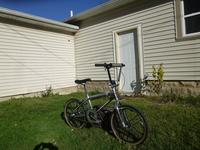 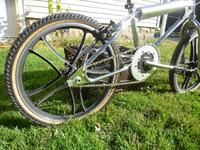 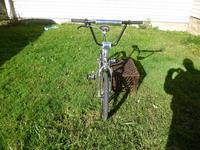 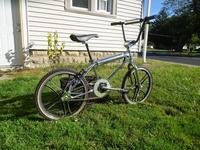 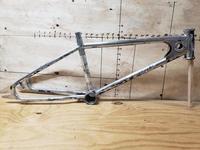 TO ME THIS IS THE MONGOOSE THAT NEVER WAS....BUT SHOULD HAVE BEEN...

I scored this one as a bare frame in pretty rough shape from a fellow member for around $50. It had been spray bombed at least twice. Someone had given up on stripping off the paint to return it to chrome, so at least 40-50% of it was still covered in paint. It took some time and some work, but after a few applications of gel paint remover it was chrome again. A bit scratched up and a few bumps here and there, but chrome. Given that this was a cheap project in so so condition I took the liberty of removing the chain guard tabs.   And to be honest I really dig this frame! When I look at it I see what should have been the transition model in between the Mongoose Motomag era frames and the looptail Expert/Cali frames. Its about the same size as a Motomag, it has a very similar gusset, and a nicely proportioned looptail. The only downside is that it isn't cromo, however it is rather small so the weight isn't too bad.

After getting this thing cleaned up I threw it together with a bunch of stuff laying around;Dyno forksNecco 1" alloy sealed bearing headsetRepainted Huffy Challenger barsPowerlite stemSome generic flame print gripsBlack Ops brake lever with a Bull Dog caliperA set of walgoose mags with a Dicta freewheel(pretty sure this makes build No.6 for this same set)A generic cromo seat post,a generic padded seat, and an Odyssey RX-2 clampA Pork Chop 1 piece cromo crank mated to an Origin8 disc and a generic 44T VP pedalsBlack and chrome Taya chainSome slightly worn Primo Vee Rubber skin walls(those I didn't have, cheap score from the site) Slightly used chrome pads set(another cheap score)
This one took a bit of work and was a bit of a challenge. I'm pleased with the end result so that makes the bit of work worth it.

Nice build!  Cool looptail and gussets on that frame!