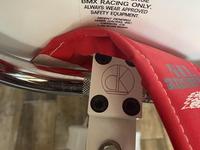 One of the baddest bikes to go into production in the early nineties. Here’s a bit of info you might not have known. Brian Lopes was one of the first well known factory Pro riders on Hawk and word has it he smoked Pistol Pete on the last spurt while riding for Hawk. Pistol immediately went to Hawk asking for a frame to be built to his specifications(he liked a really high bb) although they didn’t have the funds to sponsor Pete. Well then it became the Pistol show as he went on a dominant terror on his Hawk F-20. A few other studs went on to ride for Hawk, another dominating one being the Mighty Moses Tillmon. I purchased this 1st Gen frame during it’s initial release at the end of 1991 and never let it go. Started to rebuild my Hawk for my son around 2004ish then really broke it down to rebuild for myself after he tired of it a few years later which then spurred my addiction to build all the best bikes and parts I wanted in the late 80’s and early 90’s. Thanks for looking

What a classic! These seem to bridge old school to mid school.

For all the Homies that never got a chance to hook up their ride ....

I'm jealous of that stem.

Sorry for my approximate language.

What a classic! These seem to bridge old school to mid school.

Thanks cal2deck, stin1, lefred, AJ, Nostalgia and anyone that fav’d much appreciated.

I'm jealous of that stem.

I’m jealous of that Cyclecraft

I think I’ve just wee’d myself

Do not go gentle into that good night,
Old age should burn and rave at close of day;
Rage, rage against the dying of the light.

Nitrous is like a hot chick with an STD, you want to hit it, but you're afraid of the consequences. Spray and pray.