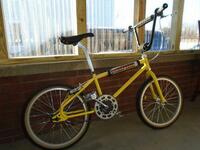 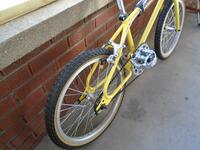 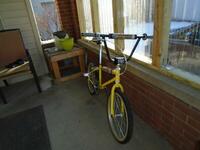 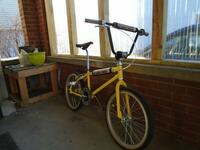 Picked this one up as a mostly original, complete bike, locally from FB marketplace for $90! The only OG parts not in place were the wheelset & seat. None of the components in place were worth reusing so I rebuilt it with stuff I had around, mostly, the 1st time around. I decided to leave at least 1 pic of that version for referance. After tearing it down, removing the damaged OG decals and giving the frameset a good scrubbing, I did discover that the chrome is quite scratched & hazy with some rust in the tight spots. Around about the same time that I bought this Expert I also bought an '84 Cali that had been painted a nice metallic brown. After a while I had to make the tough decision to sell the Cali frame set, keeping the bits I bought for it. Most importantly the pad set, those being my favorite component of the overall look of the '83-'85 Mongoose. It took a while to make up my mind, but finally decided to repaint the '86 a color that would work well with the hombre'd pads. I was originally thinking a shade of orange, however given the fact that I would be stuck using a rattle can, my options were limited. Not finding an orange that I would be happy with I decided on this shade of Krylon called Sunshine yellow. Not an "exact" match to the yellow in the pads but I think they complement each other well. The final finish of the paint job isn't perfect but presentable. I did end up using the original forks on another build temporarily. For now, I have replaced them with some early 90's something cro-mo forks that I repainted to match the frame. Most of what I used as I put this back together was "borrowed" from lesser projects, such as the Huffy bars I repainted for another project. The remaining bits are a Necco sealed bearing headset from Pork Chop BMX, generic grips, SR 422 stem, alloy flutted seatpost with a generic padded seat and an Odyssey RX-2 clamp. The crankset is made up of SR 175 tubular cranks, an Orign8 disk with a 46t Suntour chainring and VP pedals. For a brake setup I have a Dia Compe caliper and lever. The wheelset is an almost new pair of Chen Shin Comp III's bought a few years ago mounted on a set of 36 spoke generic hoops laced to Joytech hubs recently purchased from another member for less than $150. Future plans are to replace the bars with some correct 'goose bars painted to match and to also paint the original forks to match, and the finishing touch will be some '85 Expert decals.