It took me nearly three years to refinish this frame and assemble the parts for the build. I've been looking for this bike for a long, long time.

So -- the story goes something like this.
This bike was originally supposed to be a 1992 Gardner-made Standard Lengthy. But for whatever reason -- whether quality control issues or an addiction to Ford Mustangs -- several framesets and tube-sets never made it to SBC. Enter Cecil Milligan and Darcy Saccucci. These Canadian upstarts bought the remaining stock from Gardner and in true Dirt Bros. fashion, decal'd and sold them under their own brand: Basic Bikes.
This particular frame was one of a few tube-sets purchased by Basic, and welded up in Vancouver Canada. Most of the first-gen Basic Bikes were factory-finished in a satin chrome. But this bike, having been a raw steel tube set, never had a factory finish, and its original owner, Steve Roy, just spray-bombed it. (from the layers of paint removed, I believe it was originally black. Sometime before 'Beer, Sex & BMX' it was repainted navy blue, and a built-in seatpost clamp was added.) When I received the incomplete bike, it was metallic lime green, and had been spray-bombed many times.
Since there was never a factory colour to return it to, I chose a deep metallic red much like the candy apple red of the NOS Basic Small-Town Hick seen in the Snakebite BMX article on the history of Basic Bikes. The decals are my reproductions of the Basic STH (even though yes, this is a Big City Bastard.) This is mostly because I came from a small Ontario farming community, so I am truly a Small-Town Hick at heart. I added the large Poor Boy logo on the top tube as Steve had, and as an homage to his later '90s company, I added the original 1664 BMX decal at the base of the top tube.
Wherever possible, I have used parts that came on this bike as I received it, some of which I am certain date to when Steve owned the bike (for instance, the Peregrine SuperPro's, and the front Primo V-Monster, scuffed nearly bald) and some of which do not (such as the very cool S&M Stupid fork, which was on the bike when I got it, but which Steve himself has stated he never used.) Any parts original to the bike are marked below with an asterisk.
More pictures and references in the comments section.
Frame: 1992-93 Gardner-made Basic Big City Bastard, welded up by Toby's Cycleworks in Vancouver.*Fork: S&M Stupid / Menstrual fork.*Stem: polished S&M 1" Redneck.* Bars: 1988 Haro kneesavers. (Thanks Colin!) Bar Ends: CamAcura.*Grips: New ODI Longnecks, and A'me Tri Hitchhiker protectors.Wheels: Peregrine SuperPro.*Axles: SBC sealed for Suzue hubs.*Tires: (front) Primo V-Monster.* (rear) ACS RL Edge. (thanks Colin!) Brakes: Dia-Compe AD990 front and rear.*Brake Pads: Scott-Matthauser (front) Dia-Compe (rear)*Brake Plate: CamAcura.*Levers: Japan Dia-Compe tech 77's*Crank: GT Power Series OPC, 175mm.*Pedals: GT DX.*Chainwheel: Tuf-Neck, 41t.Power Disc: Sugino.Seatpost: SBC.*Seat: GT, cut. (thanks, Colin!) Detangler: SST Oryg.*Chain: Black KMCPegs: Basic Silencers (note in picture #6, front pegs have been modified, with additional holes drilled.) *Custom decals: Basic STH set (incl. downtube, top tube, head tube, seat tube.) Poor Boy logo, custom 'Stupid Fork' decals, Basic "NHL" logo on bars, Basic "small b" logo on bars, and Club Homeboy Buckwheat on bars.
Thanks, and acknowledgements: Colin Ashe, Cecil Milligan, Steve Roy, Attila Sarlosi, Ryan Linskill 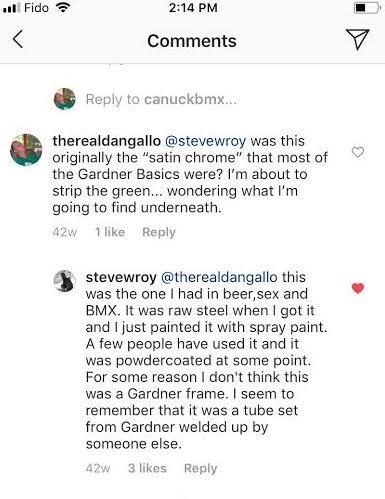 Conversation about the frame with Cecil Milligan of Basic Bikes 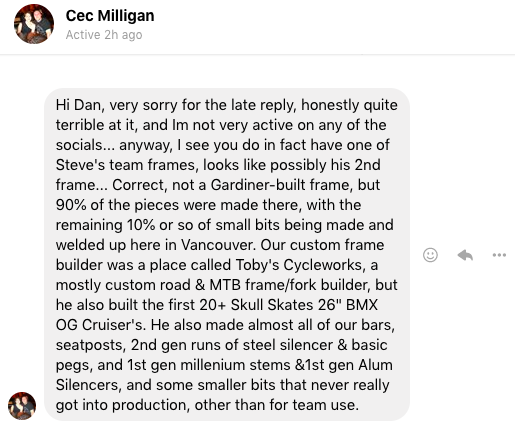 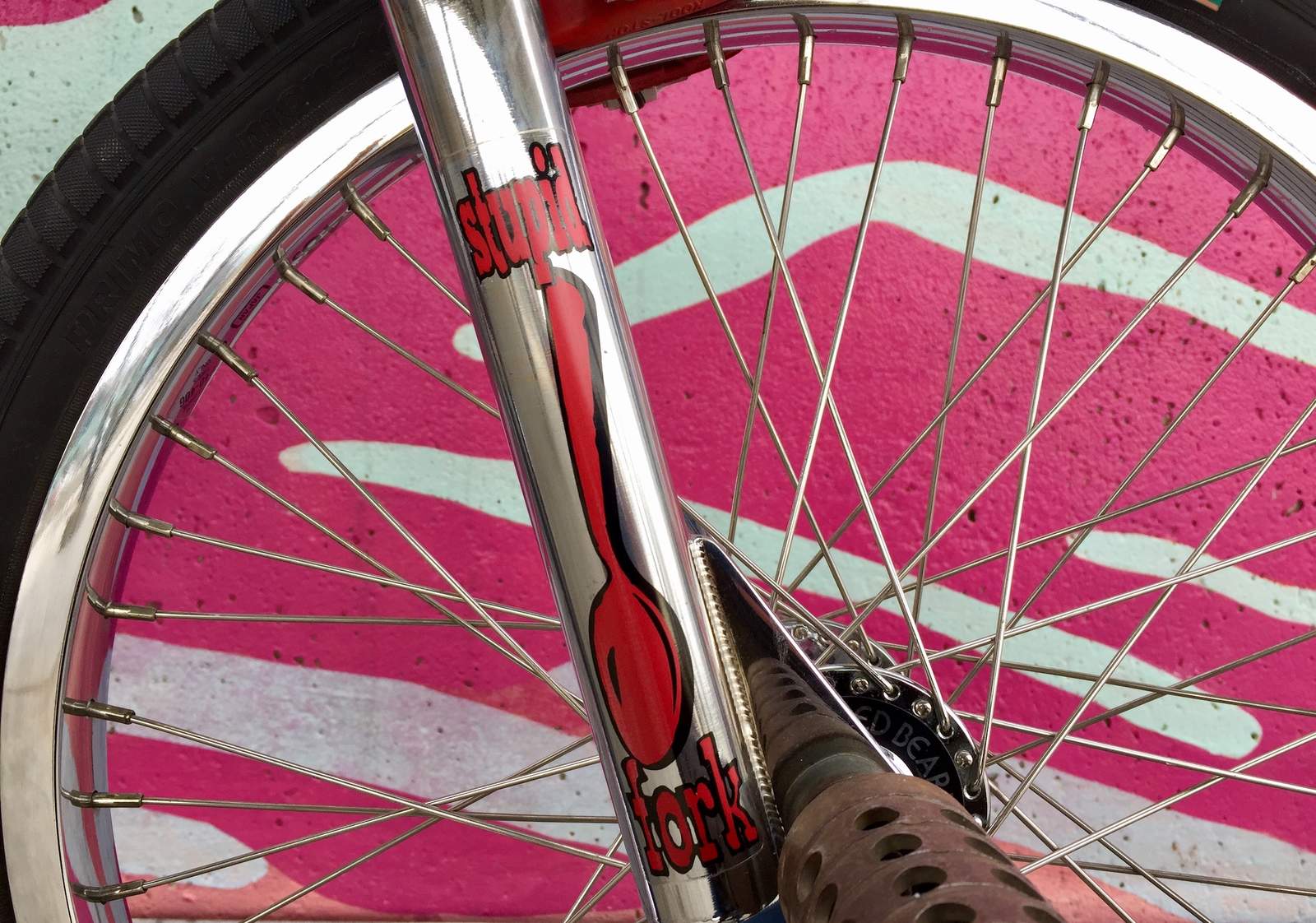 Some anomalies about this frame (likely due to it being partially manufactured by Gardner, and then assembled by Toby's.

1) all tubes that intersect the bottom bracket pierce the BB shell. Member suicidepan says this is very uncommon, and only on a very few Gardner-SBC frames.
2) the welds and assembly are actually better than the Gardner product, which were in some cases pretty sloppy. (It's like finding a stack of needles in a stack of needles...)
3) The second cable guide on the down tube is actually a stop, even though the lug exists to pass the cable thru the BB. See below. 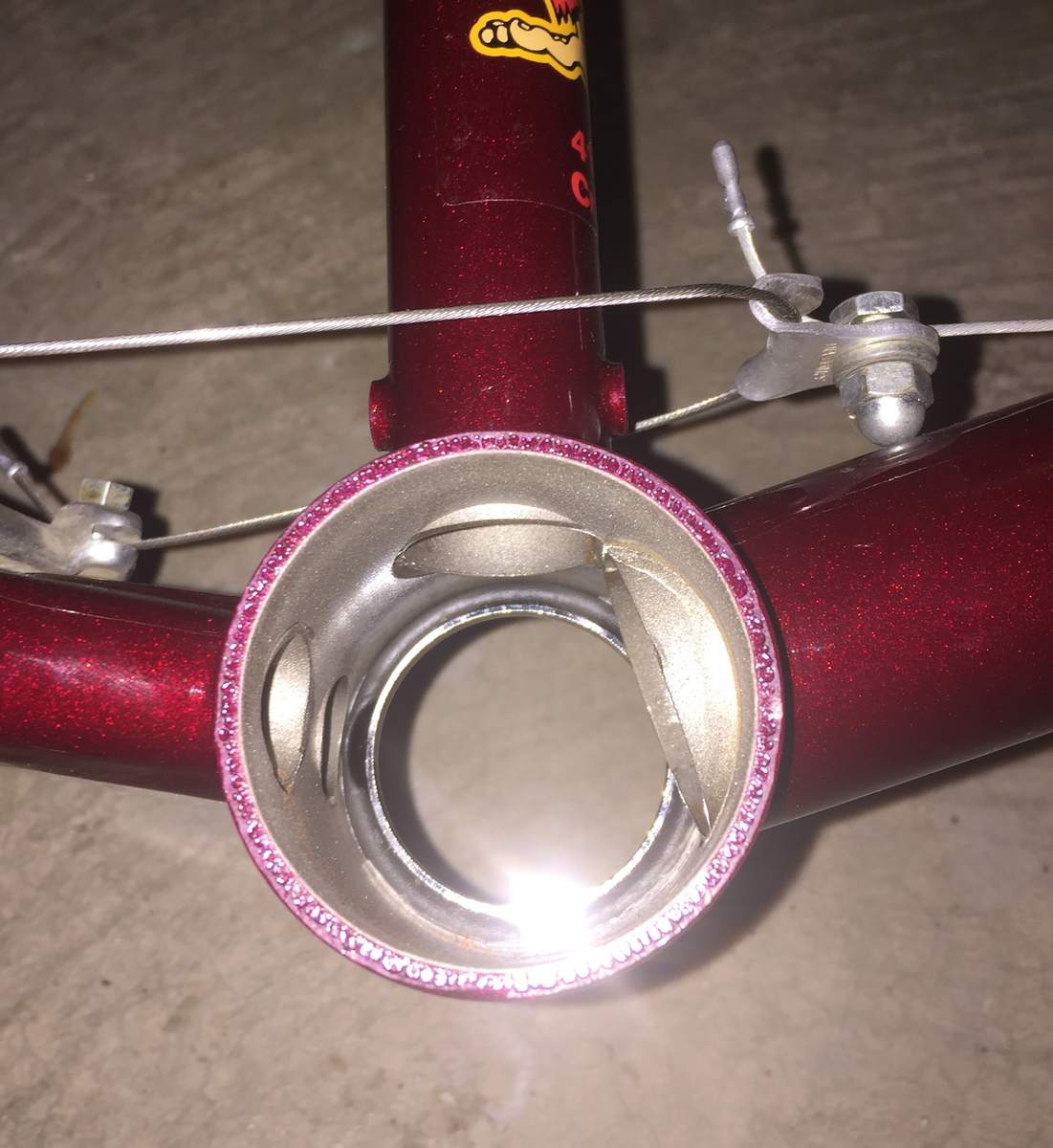 Trying is the first step to failure

Skin on skin or it doesn't go in

This is amazing.  Basics are fascinating to me and this is a beautiful example.

Dave and Rodney -- thanks so much you guys! This one was the one I had been looking for. The big one. Thanks for the kind words.

Some anomalies about this frame (likely due to it being partially manufactured by Gardner, and then assembled by Toby's.

1) all tubes that intersect the bottom bracket pierce the BB shell. Member suicidepan says this is very uncommon, and only on a very few Gardner-SBC frames.
2) the welds and assembly are actually better than the Gardner product, which were in some cases pretty sloppy. (It's like finding a stack of needles in a stack of needles...)
3) The second cable guide on the down tube is actually a stop, even though the lug exists to pass the cable thru the BB. See below.

My Sluggo has these piercings in the BB shell as well. Thought my STH did too! I'll check.

This is fantastic with a awesome story. Congrats!

It’s a goddamn absolute shame what this once magical place has turned into the last few months.

Anyone remember: Can Am BMX track, Lafargeville, NY in the 80's???? I Most Likely Kicked your ass there!!!!  "Riders ready! Watch The Lights!"

Look killer Dan. I’m almost done with the satin chrome finish on my 92-93 BCB.…it’s starting to come together nicely…Let me know about the decal guy.…thanx!

This bike makes non Canadians wish they were Canadian.  That’s one of those rare rabbit hole bikes.  I miss 1994-96!

Life is short.  Spend it!  Looking for: I will PAY top dollar for a Fishbone 1-1/8 X-UFO  detangler.  Also need Hevron Haro stem.  Have mid school goodness to trade also.

Historic bike. Thanks for sharing all the details. Very cool.

CALI LOVE
"Do not take life too seriously. You will never get out of it alive." -Elbert Hubbard

Do not go gentle into that good night,
Old age should burn and rave at close of day;
Rage, rage against the dying of the light.