This was Scot’s bike back in the day.

This was Scot Breithaupt’s personal bike. check this link.  It is Jeff Davis who raced for SE. Jeff died in his twenties. His dad had an OM on back order in 1981. Production was behind so Scot gave him his personal bike. Jeff’s dad, Harold, helped Scot alot and probably helped him financially. The frame has been refinished with different parts. The frame has a couple small cracks in the headtube welds that happened back in the day. The bike has a weird serial # that even Scot couldn’t figure out. I will add a picture of that.
1st gen se cruiser bars
Reline flight with techmatic
Araya 26x1.75 phil hubs
Tuf neck inverted stem
Tange headset
Skyway pedals
Elina super pro
Sr post
Irc tires
Tange grips
Dc clamp
Dc caliper
Mathauser finned pads
Dc tech 3

Instant fav,  can you tell us more?
This was his frame set? whole bike? repainted?
Not doubting, but do you have some ind of proof?
Awesome bike! thx 4 sharing

Instant fav,  can you tell us more?
This was his frame set? whole bike? repainted?
Not doubting, but do you have some ind of proof?
Awesome bike! thx 4 sharing

Thank you! I don't have proof but the mother of Jeff Davis is a local here. She brought in all of Jeff's stuff and gave it to Todd at R&M Cyclery, including ton's of pictures and documents. Harold, Jeff's dad, had an OM Flyer on back order so Scot just went ahead and gave Harold his personal OM Flyer at the 1981 Grand Nationals. By the time Todd got the bike, it looked like Harold was trying to put a derailleur on it and turn it into a mountain bike. Todd had the frame and fork refinished and re-installed the original down tube decal. Then Todd built it up with his own high end parts. So, I think that the frame and fork are the only part of the bike that was Scot's. I think Todd talked to Scot on the phone about the whole deal and Scot did not have an explanation on the weird serial # this frame set has. Todd is the guy that knows about all of this stuff first hand. I am just going by what he told me. And Todd gave me both picture albums to borrow so I could validate the story. He also gave me Jeff's bag. Another one of the items Todd has is a set of Ultramax cranks that are engraved "Jeff Davis SE Racing". I have posted those on here before but I had to give them back to Todd. He still has those. I am pretty sure, that the Floval Flyer hanging in Todd's office right now was Jeff's personal bike as well.

UPDATE: I Just texted Todd. He said he only talked to Scot about the serial # of the bike, which Scot did not know. And Harold (Jeff Davis' dad) told Todd the story on how he received the bike at the 81 NBA Grands from Scot. Todd received the bike straight from Harold Davis. 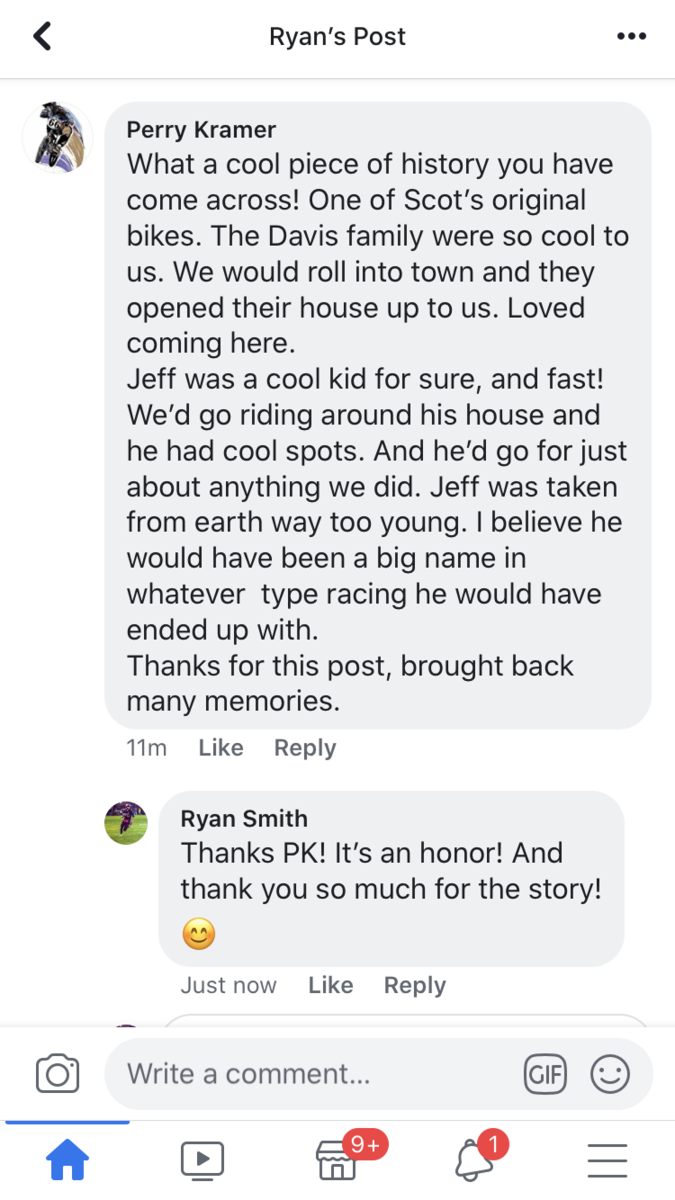