Last week I paid too much for a 1974 Schwinn Stingray. In the one pic of it listed for sale it appeared to have a set of Scrambler tires on it as a part of its transformation from muscle bike to early BMX. However, when I arrived to buy it, I realized that the rear wheel had been swapped out and the original S-7 was awaiting a proper tire- those Schwin s-7 Scrambler tires turned out to be early BMX tires and 20x2.125- incompatible on Schwinn wheels. I bought it anyway being a sucker for BMX history. While restoring this bike, the forensics of it began to become clear. I imagine it like this... 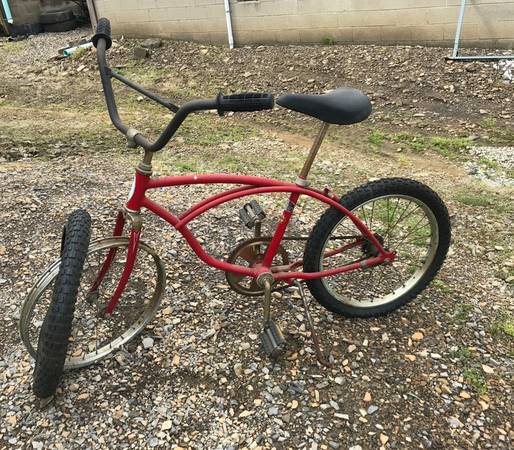 It’s the early summer of 1978. Schools out and most of the kids in the neighborhood are out building jumps down in the gulch near Johnny’s place.

Sam definitely leads this pack. He is 17 and has his license but he still rides a little kids bike. In fact, he races it at the Markle Track in Westmoreland County, PA every weekend. At present, his clean white Redline Proline leans against a tree while he leans on a shovel handle, talking in spurts about the No. 1 NBL ranked BMX racer, Stompin Stu Thompson. He and the older boys go back and forth using phrases like hole shot, and taple tops, as they speak.

Johnny is one of the younger kids at 12. Sitting there on his 1974 Schwinn Stingray in Opaque Red, a bike he discovered on Christmas morning when he was eight, he is a crestfallen. His bike is of the dragster variety, a muscle bike; banana seat, ape bars, and a slick tire in the back. He was once so proud of his Stingray that he kept it in his room next to his bed and polished it after every ride. Now, he wishes it was a Redline, or a new Schwinn Scrambler.

As the summer progresses, the jumps get bigger and the kids get better at hitting those jumps. Johnny witnesses a kid doing a table top and he is just as mesmerized as when he saw his first wheelie, at the age of 5. It is during this season of Johnny’s life that he begins to formulate a plan. The plan involves convincing his dad to allow him to convert his Stingray into a BMX bike. Lots of other kids are doing it and Johnny knows that it is pretty much the only way he will ever have a chance at getting into BMX. So, usually after dinner, or on the way back from church on Sunday, Johnny talks to his dad about BMX; about BMX handlebars, and knobby tires and how cool it is to be able to ride a bike just like it was a motocross bike. It’s August before dad has been educated enough to see the merits of converting the Stingray to a BMX bike. So, off they go one Saturday morning to Gattos Bike Shop where Johnnys dad buys him a set of BMX handlebars, Some knobby tires and a pair of OGK grips. Its not enough to make it a Redline, but it will convert his Stingray from dragster to motocross.

That afternoon, Johnny and his dad, strip the Stingray down to its bare essentials; no more banana seat, fenders, ape bars or chain guard. On goes the BMX bars and OGK grips. Dad steals a cheap seat from a Free Spirit Ten Speed to replace the banana seat. And then, they attempt to swap out the Swhinn Gripper Slick and Westwind tires for the 20x2.125 Knobbies with no luck. After a call to the bike shop and some swearing on dad’s part, they realize that Schwinn tires are proprietary, meaning that Schwinn S-7 Wheels require S-7 tires (a move Arnold Schinn made in 1965 to increase revenue). Dad finds an old coaster brake wheel with a few missing spokes from a girls Murray eliminator over at a friend’s house, but he can’t find a front wheel. And, that Saturday ended with Johnny just shy of being able to BMX. Sunday’s drive home from church consisted of Johnny and his dad making plans to finish the project. It was decided that a return trip to the bike shop was in order which might just include a set of Tuff Mags.

The next five days were a mixture of agonizing impatience and exquisite anticipation. Every night he would remind his dad about the trip to the bike shop, just after dinner when his dad was settled into being home. And, without his Stingray, he was stuck riding his moms Schwinn Suburban around the neighborhood all week as he imagined what it would be like to actually ride on a pair of Skyway Tuff Wheels the next week.

Saturday came and Johnny and his dad returned to Gattos. His dad was intent on finishing the “Stingray Project” as he called it. Upon entering the shop, Johnny saw rows of BMX bikes; Mongoose, Redline, Schwinn, Ross. His dad explained their conundrum about the S-7 Wheels and the knobbies not matching up, and asked to see a pair of Tuff Wheels. He and the salesman talked, and then talked some more. And, then, after an hour of deliberation, Johnny and his dad walked out of Gattos with a brand new Mongoose Supergoose, chrome with blue Skyway Tuff Mags. And, that Stingray sat in the garage for 40 years just as it was left that day in August 1978. Well, it could have happened that way.

Man, that's a heck of a story... I am reminded of my childhood from this story, I had many days like those and know someone who fits each profile... I guess we had it pretty good back then... I miss the 80's...

Countdown To The Weekend,BMX FOREVER!