This is an extreme long shot, considering how long it has been now, what area of the country I'm from, and how I don't have any pictures or serial numbers, just verbal descriptions... but here it goes:

I used to live in Wahpeton, ND/Breckenridge, MN and between those times had 3 different Haro's stolen from me. I'll do my best to describe them now,

- 1999 Haro Shredder in the metallic blue color (I think Haro called it "titanium blue" but I'm not positive, so I’ll include a photo of my 1998 Shredder with the same or very similar paint color, but the 99 had red/orange decals instead of the silver/red of the 98) - This one is likely to have the best verbal description since I remember so many of the parts I had on it and I definitely had it built weird (I was a kid!) - It had some 6 spoke Skyway Mags with old school Haro skin wall tires, one of those sparkly white/cream Haro Dave Mirra pro seats, Haro anodized blue "Nuke" chainwheel, Fusion 3 pc cranks - tubular chrome, blue Primo Tenderizer pedals, Fusion pegs, maroon Solid "Death" grips, blue Tektro brake levers, blue dice valve caps, I THINK it might have had a Primo Pervert upper gyro set up, Kneesavers with a Pr1mo sticker added to them, etc etc. These are the parts I had on it when I was stolen, granted, I remember a kid at the skate park telling me he thought he knew who stole it, because he saw him have some of the same parts on one of he bike that he thought were on my Shredder, but I could never find this kid to confirm whether or not it was true. So even if someone in the area saw my bike, it might have completely different parts on it now, sadly, if it’s still around.

Here’s a pic of my 98 for somewhat of a reference on the color: 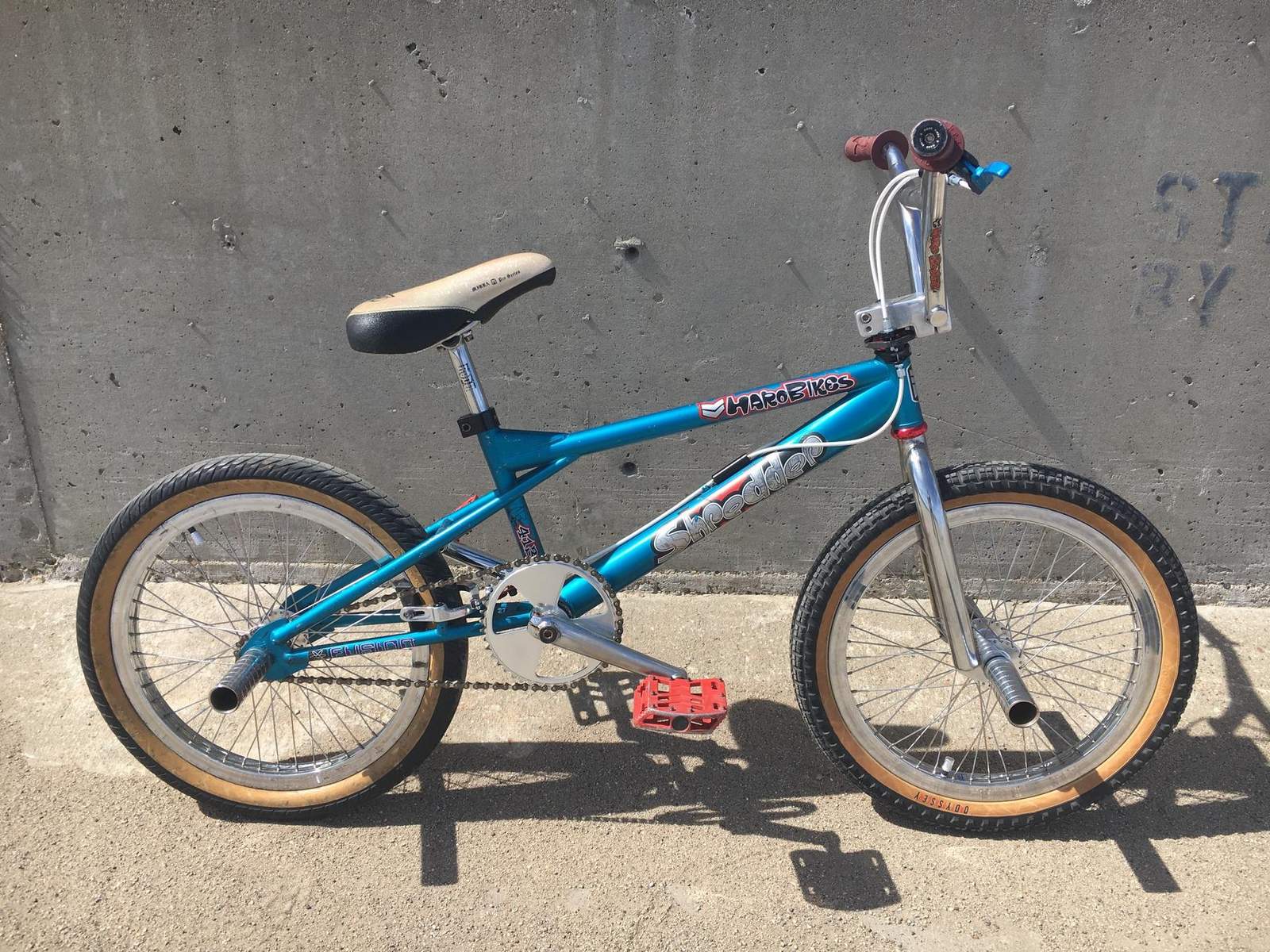 Here’s a photo of my current 90 Psycho for reference of at least what the frame and fork looked like: 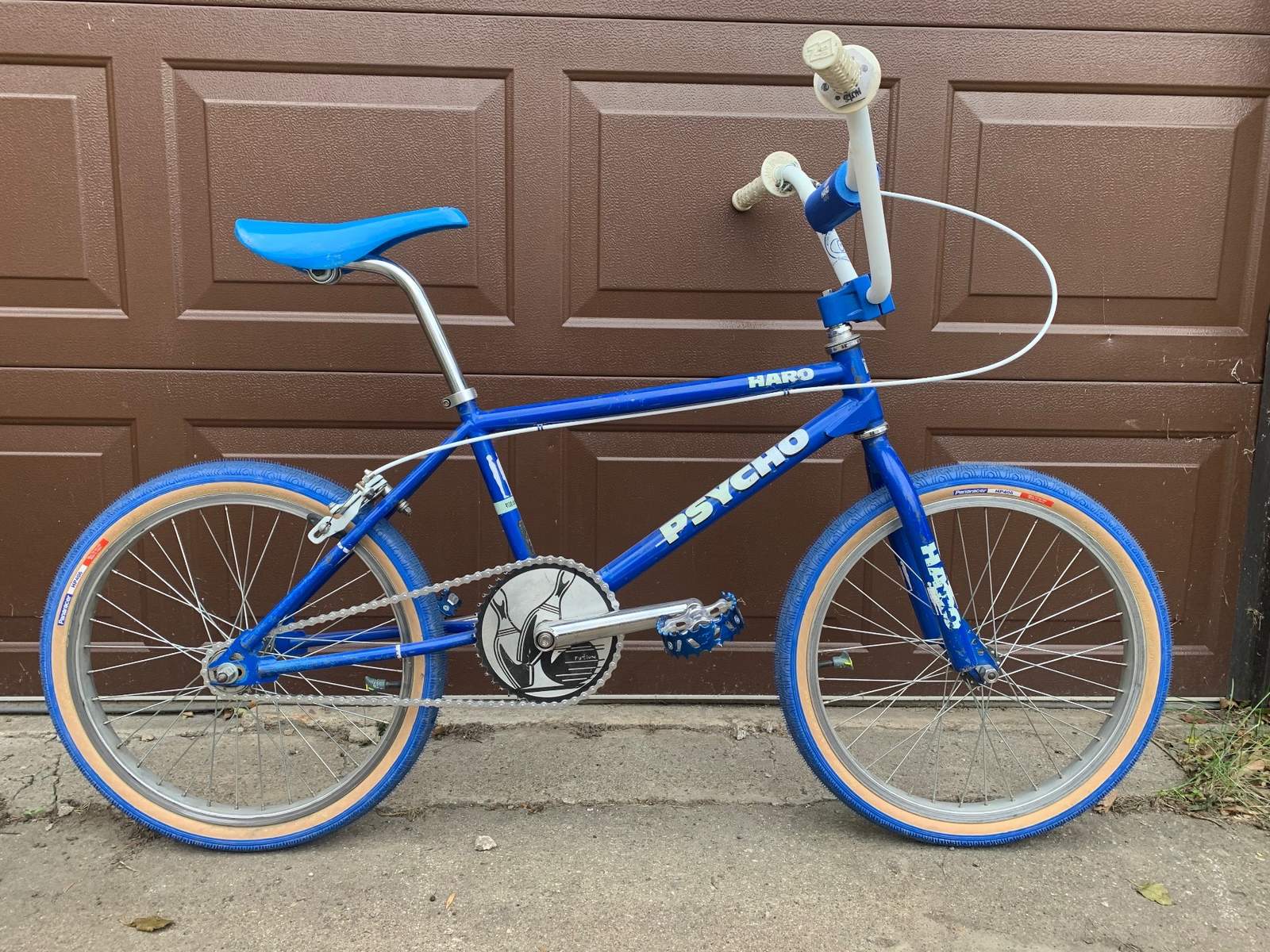 - 1984 Haro Master chrome. No decals. This one I have the least info about, because at the time it was stolen, I am not entirely sure I even had it built or not anymore. But at the same time, it may have been. My memory if this one is not so great. I just remember it was an old chrome Haro frame, and the rear dropouts were beat up pretty badly, like someone had done a poor job of grinding the dropouts to 14mm (why I had gotten it for cheap on ebay). I don't even remember what parts I had on it, if it was built. I think I was going for a mix of old school with what was then modern but now mid school flatland, so if it was built at the time it was stolen I’m pretty sure it had a 36t GT Flywheel painted pink on it, I’m thinking I had a pink Tioga/Kashimax F/S seat on it and possibly some sort of mags as well.

If I end up finding old pics of any of these, I'll post them on here. I don't think it's likely though.

"It's easier to fool people than to convince them they have been fooled" - Mark Twain
I am not of this world ---- 1978 GLJ 1979 DG Racer ----
Revelation 13: 16-17    And he causeth all, both small and great, rich and poor, free and bond, to receive a mark on their right hand, or in their foreheads:  And that no man might buy or sell save he that had the mark or the name of the beast or the number of his name.