I'd never heard of GJS until I saw one at an old school BMX show in the UK a few years ago. As soon as I saw it, I knew I had to find one, although I didn't start looking seriously until last year as I had other builds on the go.

Although there were an estimated 12 prototypes made, the general production framesets were only made for 2 years, 1984 and 85. The 1984 model has round chainstay tubing, but I was drawn to the 1985 model as the chainstays are square. '84's are more common than '85's, although both are very rare. Exact production numbers are unknown, but it's generally accepted/estimated that only about 200-300 freestylers were made over the two years before GJS went out of business sometime in 1985. There are only 2 other square chainstay freestylers (apart from mine) on bmxmuseum.com, and a few others on the GJS facebook owners group. I think there are about 6-7 documented worldwide. After putting wanted ads up on here and bmx museum with no luck, and missing out on one on ebay over a year ago, I put a wanted ad up on the facebook GJS owners group. Unbelievably within an hour, someone contacted me and said he had an '85 frame & fork that he would consider selling. I asked his price, and what he was asking wasn't over the top money, so the deal was done.

Here's how the frame & forks arrived.

I was pretty sure the paint/powder job wasn't the original finish, plus it had a few chips and the frame had a few dings and wear to the dropouts that needed sorting out. I therefore cracked open the hard stuff and got to work stripping the frameset

I then took the frameset to a local welder who did a superb job of sorting out the dings in the frame and building up the chewed dropouts. I then gave the whole thing a good sanding down, ready to be sent off for paint

F = Freestyle
I believe the serial numbers started at 100, so in reality would be frame number 221. Numbers were sequential with no date code.

As far as I know, the freestyle frames only came in chrome or white as factory options. I wanted to do something a bit different on this build, and as many of you know I love pink. 1985 was the year that pinks/oranges/greens and lavender really started to be used, especially with freestyle bikes. I happened to see a can of pink spray, and thought the colour looked pretty good.

I wanted the colour to be darker than Hutch pink, as I felt like doing this build in the same colour would make it too similar to a Hutch Trickstar, of which there are already a few amazing examples in pink. Although a friend and myself talked about spraying the frame ourselves, I had the prize of a free paint/powder job  following my VDC Changa winning a prize sponsored by the painter last year. I've used him before, knew his work was second to none, and was interested to meet the man himself and see where the magic happens.

By this time, i'd collected a few parts for the build including a NOS pink shot gun II seat

other parts included pink dia compe brake cables and some NOS pink ODI Mushroom grips. The cables looked fine, but the grips were far too 'day glo' and were an obvious colour clash, so they had to go

I thought that matching pink would be fairly easy, but I quickly realised that this wasn't the case. I managed to get some bubble font A'Me tri and round grips, but both of these were different shades, and weren't a perfect match for the other components. This photo is a bit misleading - the colours are very different in the flesh

I took the seat, cables, grips and spray can to the painters to decide on the colour. I thought that matching the colour to the spray can would give a tone somewhere between the seat and cables, to balance out the overall colour. There wasn't an off the shelf powder colour that was suitable, so he said he'd have to get the colour matched to the spray paint, and do it in 2k wet spray. He sent me some photos of the frameset and I was really pleased with his work. I couldn't wait to get the frame back

Although I was pleased with the colour, I was a little underwhelmed. It looked good, but didn't blow me away.

The colour seemed 'cold', and was edging towards the lavender/violet scale instead of a warm pink. My suspicions were confirmed when I put the frame next to the parts, and there was a bad clash

I took at over to a friendss to ask his honest opinion - He said it looked good...

..but good wasn't good enough. It had to be perfect.
So I got on the phone to my painter and explained the colour clash. He said that trying to get exact colour matches can be difficult, and is very subjective. I'd now realised that the colour I wanted was the colour of the seat. This was confirmed randomly when I was doing the washing up and saw the colour of my gloves - a lovely shade of pink. He therefore told me to go to a local car paints store and get the colour matched to the seat, and to double check it before approving it

The frame, forks, pedals and stand were all sent back for a re-spray. I sent the seat too, just so he could check the colour as it was going on. As soon as he sent me some photos, I knew we'd cracked it. The colour was exactly what i'd imagined

His communication and service was amazing. He is really passionate about what he does, and is determined to leave his customers happy. He certainly did that. The colour and finish are amazing.
**I must point out that in no way was the original colour a fault of the painter. It was just one of those things that can happen if you've ever tried to match colours. It's a nightmare!

I wanted to go with a colour scheme of pink, chrome and hint of black, so I got some chrome on clear decals

Decals on. The photos really don't do the colour justice, and it looks different depending on the light. I love it.

Holy Cow that is looking sweet!!!!!! Its going to be great build.

That is one hot mofo right there! LOVE IT!

This thread got me pump up! Gonna try and get this....

This thread got me pump up! Gonna try and get this....

Awesome Frame/Fork. Going to be an amazing build. Looks totally bad ass so far. Nice job on the color and excellent looking paint job. I remember seeing these in magazine ads back in the day. I never seen one in person but always thought they were super cool. Nice job. Looking forward to seeing it all built up.

I'm looking for some Black A'ME tri bubble font grips to finish off this build.

or
Oakley B2's in black. Again, must be in excellent condition.

I have all the other parts i need. Hope someone can help me out?

This is going to be killer.

I cannot let my 8 year old daughter see this thread

This bike looks fantastic, great job matching the color to the seat. Your build screams 1985 for sure.

I'm looking for some Black A'ME tri bubble font grips to finish off this build.

or
Oakley B2's in black. Again, must be in excellent condition.

I have all the other parts i need. Hope someone can help me out? 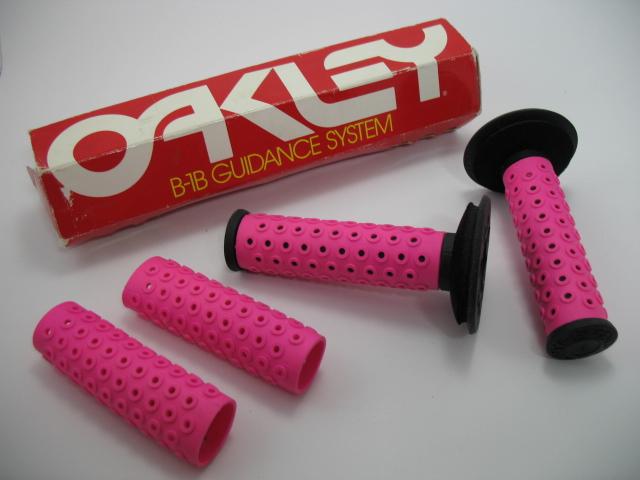 Andy that build is looking great! I had seller's remorse for a while but that seat will look much better sitting on your bike than my shelf

. I agree with Dirty on those pink and black Bib's