I’ve wanted a Laserlite since I first saw one bitd. A kid in my hometown had one and I got to see it a few times but never rode it. When freestyle became popular he bought a CW Freestyler (which I subsequently bought) and the Laserlite was consigned to the back of his garage, never to be seen again.
Fast forward 25 years when I got back into the old school bmx scene, and the memory of that bike remained, which grew stronger in 2009 when I moved to Japan, the home of Kuwahara plus Tange, Araya, Suntour, Sugino and all the other famous Japanese brand names. I dreamed of stumbling on an old, abandoned Laserlite (or any Kuwahara) but although I saw some decent examples in the old school bmx shops and meetings I visited, the elusive barn find remained just that. I therefore bought myself an ’87 Haro Group 1 as my weekend rider and started looking for other bikes to satisfy that old school craving, though would always have a look at the latest Laserlite build or score posted online. One of the latter popped up in September 2013, a KZ-83 with oval tubes and original, if well-worn decals. The rims and bars had long gone and the seat post was stuck, but the Suntour stem and “broken arrow” clamp were still there. The bike then went up for sale but without overseas shipping, so I forgot about it. Then a few months later another ’83 popped up for sale, which turned out to be the same September frameset, now missing some more parts and sporting a small dent in the right, rear stay. On the plus side the seat post was free (the cause of the dent), it was sitting on some newly-built Z-rims and more importantly, overseas shipping was offered, so negotiations were started and a deal was made. So, after about 30 years coveting one, I had finally got my own Laserlite, which was also going to be returning home to Japan, 30 years after rolling off the Tokyo Kogyo production line, they being the company who fabricated many of the earlier Kuwaharas.
Since I had wanted a rider, not a carpet queen, neither the lack of original parts nor the dent was a problem, though the more I started looking for the parts I needed to complete it, the more I got sucked into buying things I hadn’t originally planned or budgeted for. Another complicating factor is being based in Japan, since a far greater and cheaper choice of parts is available in the US and Europe, so I have go through the added hassle and expense of shipping to Japan or alternatively, asking friends and colleagues to bring stuff over for me in their luggage.
Given the condition of the frameset and the fact that it was raced over in Massachusetts bitd, I wanted to go for the survivor racer look, with a bit of an America flavour. Ideally everything would be survivor condition but the bike has taken over as my weekend rider, so consumables were replaced but apart from the Panaracer tyres and tubes, Izumi chain, Shimano inner cable and Nitto layback, everything is from the 80s. I particularly like the battle-scarred Haro Tech plate that I picked up on here, to which I’ve added a few decals. The Laserlite black and chrome colour scheme is a classic but I wanted to add a little bit of red to accent the rising sun decals. It's not a factory-spec example, but I couldn’t afford one of those 30 years ago and still can’t now, so am just going to enjoy riding my grail bike as much as possible!!
A big thanks all the members on here who helped me out with parts, especially Vazquizzel for a) selling the bike to me b) building the Z-rims and c) shipping the bike back to Japan, plus Natsukashi BMX and Screamin’ Wheels, both in Tokyo. Much appreciated guys!
Parts List (updated Sept 2015)
Laserlite KZ-83 frame (Serial #T3C**** made by Tokyo Kogyo using Tange tubing in March 1983) with matching Laserlite forks;
Tange beartrap headset;
Suntour Power stem and headlock;
No-name bars (Japan stamped) now replaced with MCS Pro bars;
Tange grips;
’83 Dia-Compe MX1000 brake caliper with matching Tech 3 lever;
Clark’s Powerglide outer rear brake cable with new Shimano inner;
ACS Z-pads (NOS);
Suntour “broken arrow” seat post clamp;
Nitto seat post (re-issue);
Shotgun 2 seat;
ACS Z-rims;
GT hubs;
Asahi spokes;
Panaracer Knarler Knobby (20 x 1.75) tyres (re-issue) with new tubes;
MKS BN10 pedals (now running Shimano PDMX-15s);
Takagi 180mm (now 175) opc;
Tange BB;
SR Spider (now Tuf Neck power disc);
Sugino chainwheel (44t)
Shimano MX-30 freewheel (16t);
Izumi chain (new) with old school chain tensioners/adjusters;
Haro Tech number plate;
Og Kuwahara stem pad with non-Kuwi California-lite frame and bar pads;
Red dice caps.

"Stupidity should be painful"

Cool story, cool build and good to see you have your values straight by building a bike to ride! No offense to the carpet queen owners. The Kuwahara Lazerlite was the bike I raced in 1983 after buying it new from Pleasant Valley Bike Shop in Dutchess County New York. Such a cool bike with the ovalized tubes integrated chain tensioners and really nice chrome- it came with great spec'd parts as well. Definitely a grail bike for a lot of us.

Thanks for the comments guys! You should buy and build another one Jayrev67!

A most excellent build! I really like your approach to this build...simple yet makes a statement..a pure race bike! Love the color scheme, not too much color(s) or flash...made for the dirt track!

I have to commend you on this build! The black color ACS Z-rims & NOS pads are over the top! Let's not forget to mention the Haro Tech plate, with just the right amount of "battle scars"...This truly is a quintessential BMX racer and an instant favorite, move it to the top of my list of favorites!

Again, congrats on a job well done! A way cool bike that makes me way jealous!

awesome selection mate.. i love laserlite too.. i hope this wont take long to finish.. anything survivor will make me love it soo much..nice kuwahara laserlite.. and nice person to know..

Recently swapped out the old, bag-of-nuts-sounding Suntour freewheel for a chrome Shimano one, and the bike now not only sounds but rides much better too! That was put to the test when I rode about an hour to the annual Happy Bike Meeting in Komazawa Olympic Park in Tokyo. This is probably the biggest, and I think the best old school bike meeting in Japan, and the good weather ensured there was a good turnout of bikes. Here's a link to a few pics:-  http://bmxmuseum.com/forums/viewtopic.php?id=648071

Plus here's one of the new and improved (even though you can't notice it) Laserlite! 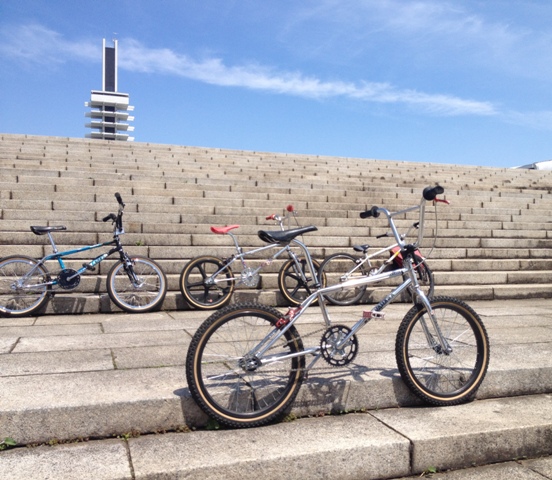 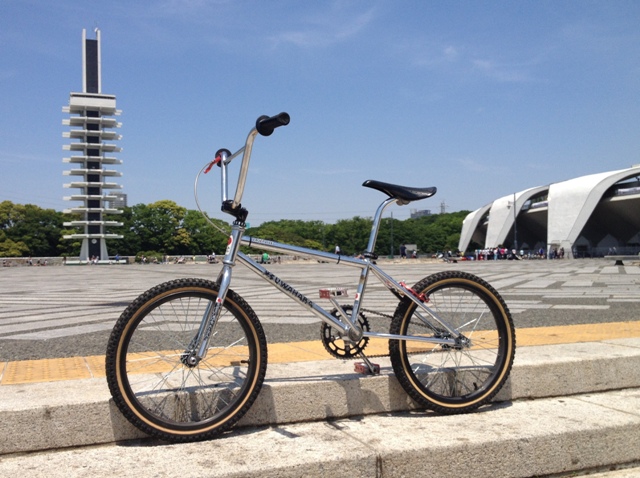 A classic chrome and black build always looks great. Like the way you used a few red parts for contrast. Using Takagi opc's also hits a soft spot with me.
Thanks also for sharing the Tokyo ride pictures.

Have recently made a few more changes, some practical, some aesthetic, though hopefully all good! First up was some older chain tensioners/adjusters which are a better fit for the dropouts and the condition of the bike as a whole. Next are some silver Shimano PD-MX15 pedals. I loved the look of the red MKS peds, even though the red didn’t quite match that of the DC brake-set, but the main problem was comfort. They may have been good for short races bitd but they’re bloody uncomfortable for cruising around on now! Thirdly, I’ve finally replaced the no-name bars that came with the bike with some big, old, MCS Pros in survivor condition. Last but not least I changed out the padset. I originally went for a red Cal-Lite padset to off-set the black and chrome but the ones I bought were just too nice for the bike. I already had the og and faded-black, Kuwahara Cal-lite stem pad and managed to find some Cal-lite frame and bar pads to go with it. Sorted!

So nothing major, but just a few subtle changes which make me much happier with the bike. I’ve lost a bit of red but like to think that less is more!

Here's an updated photo and I've also added some more above. 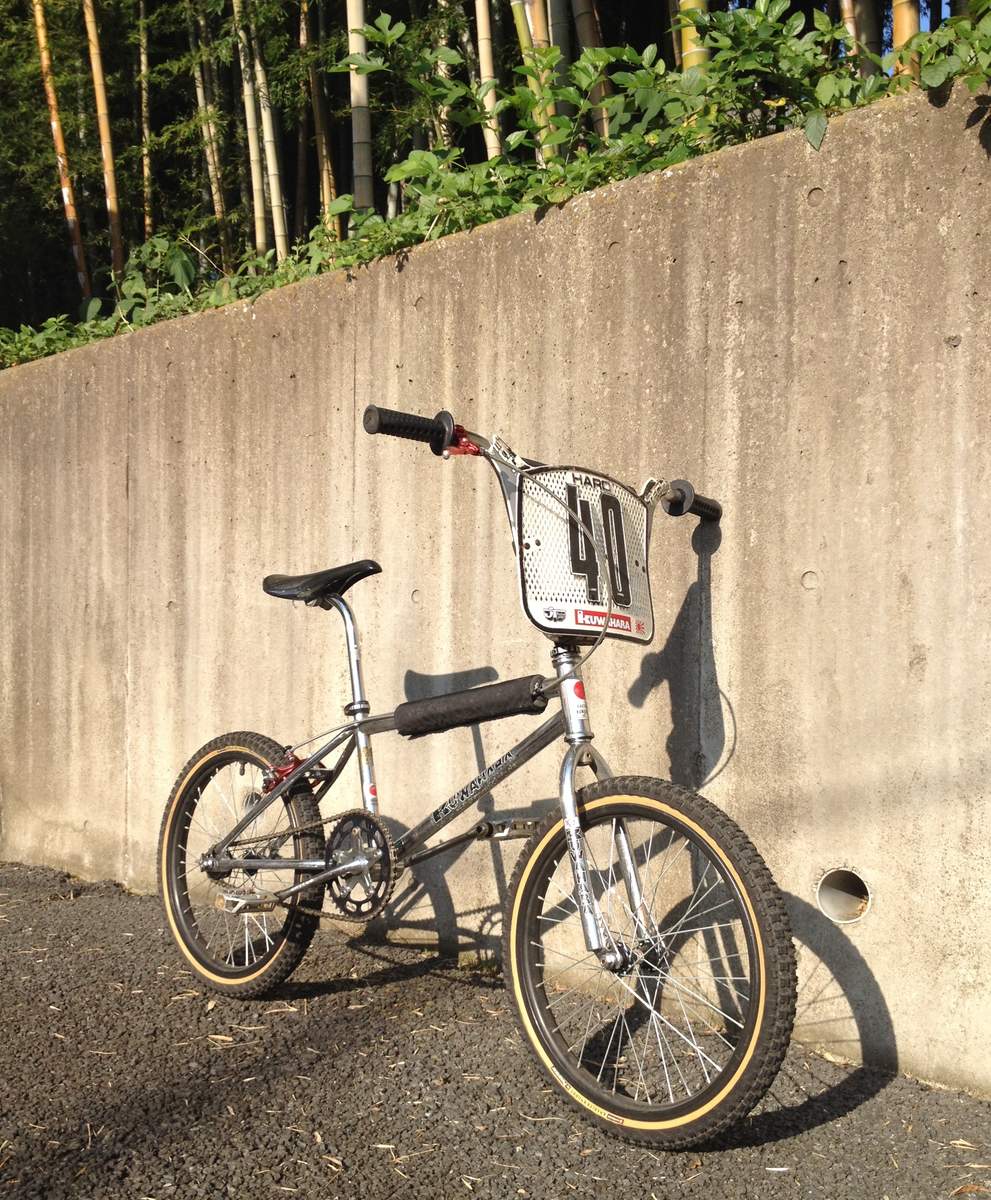 Have recently discovered a race track not too far from where I live, so yesterday I rode the Kuwi there for a few laps, and of course a few photos! 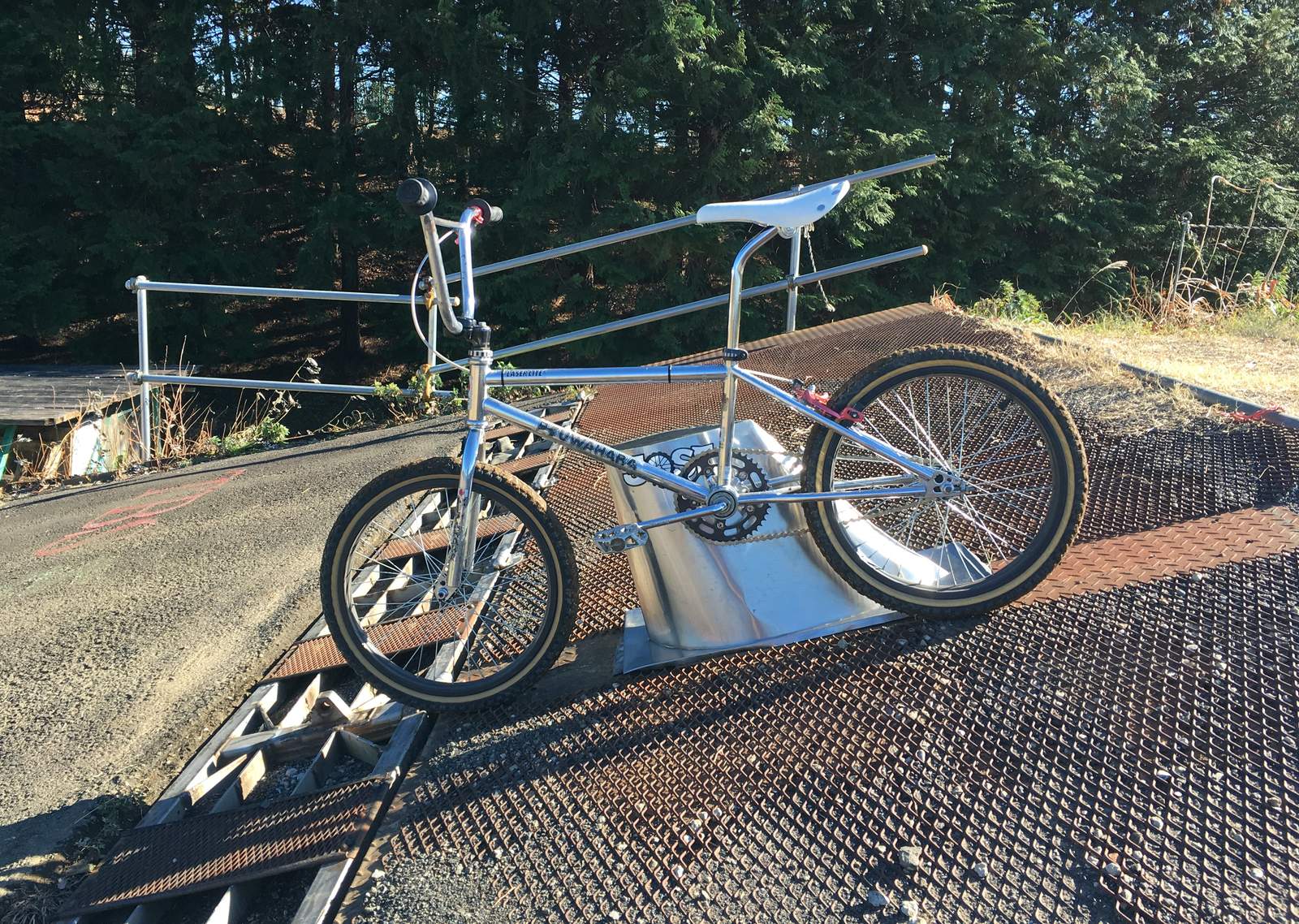 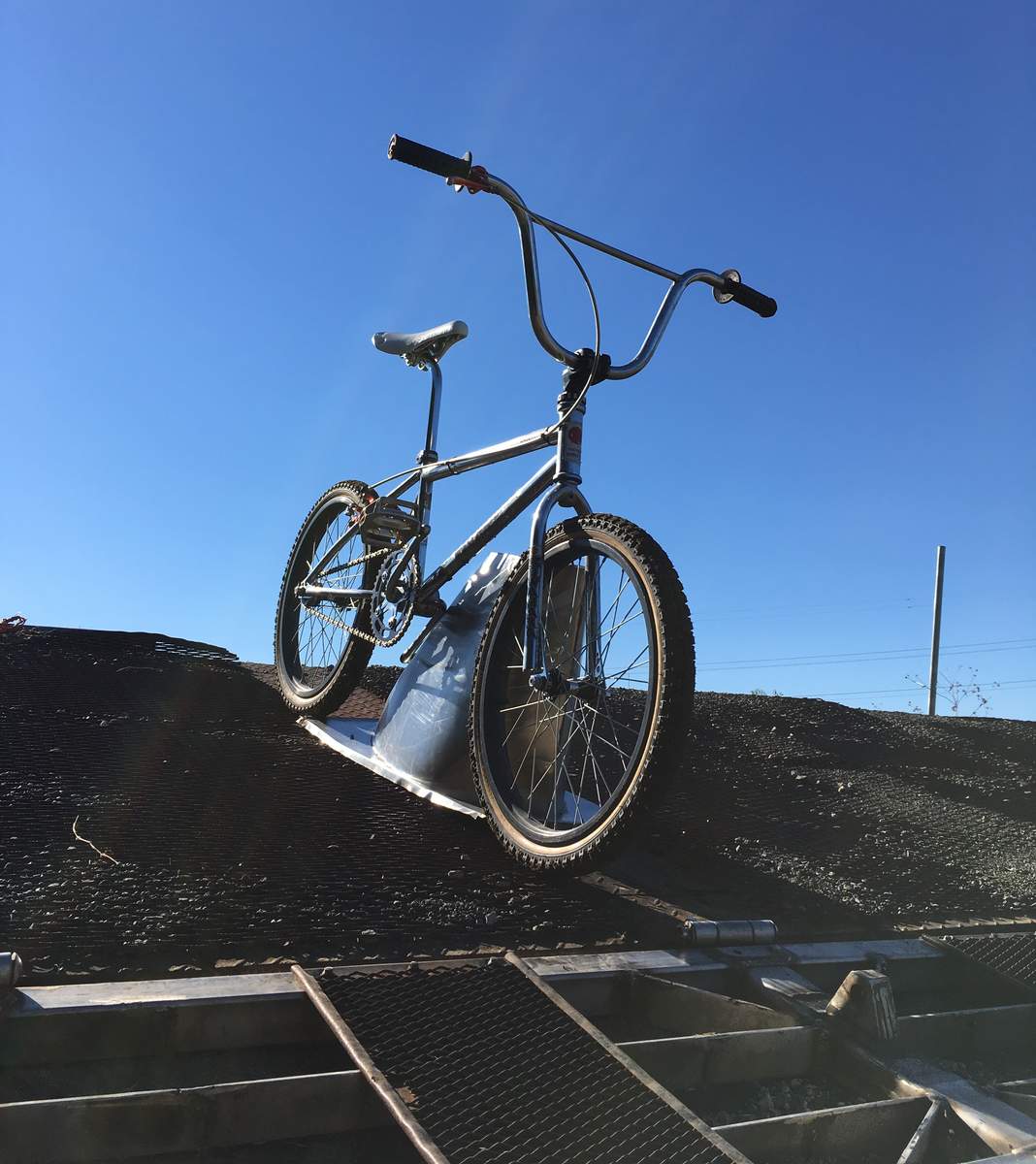 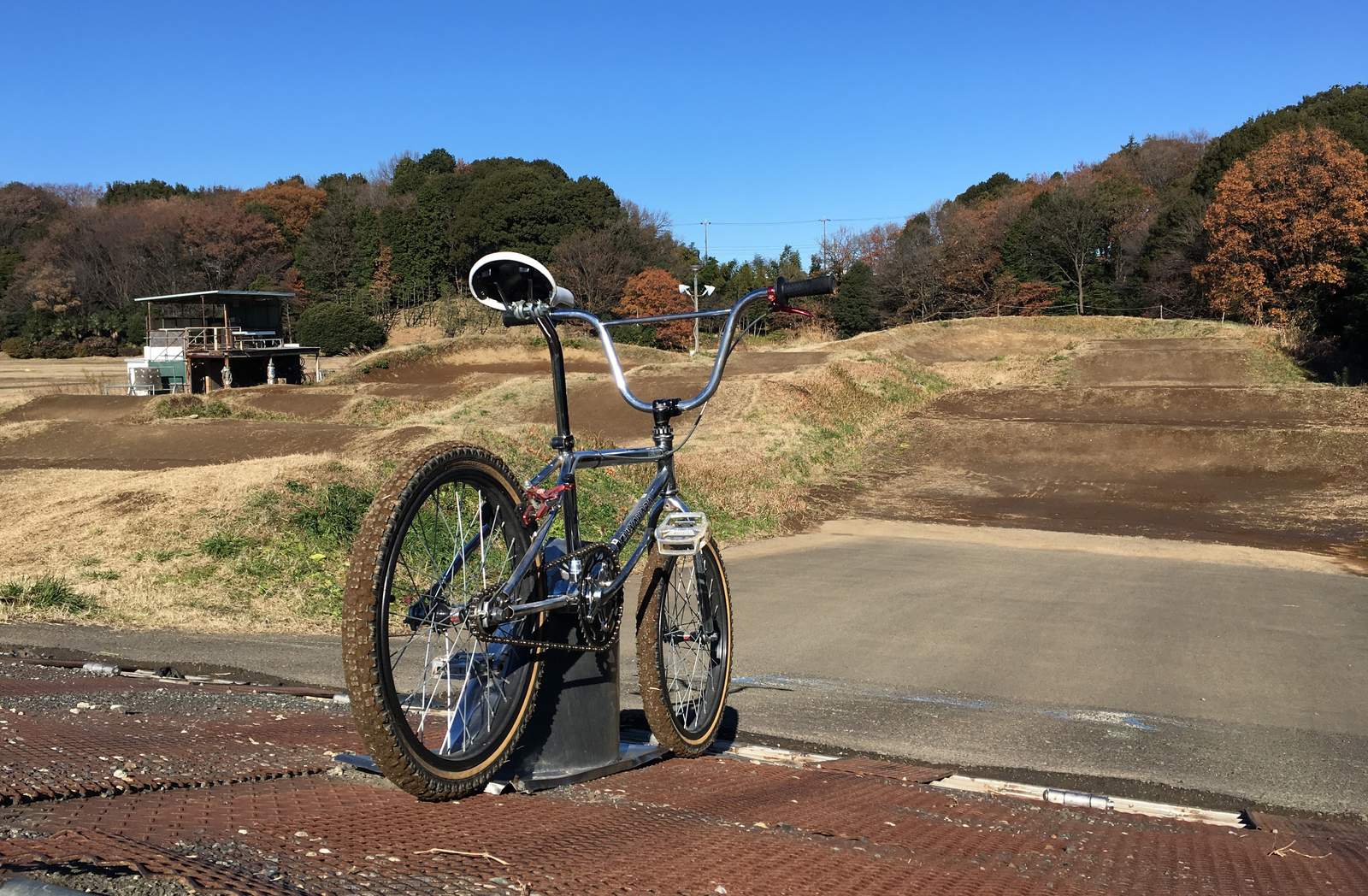 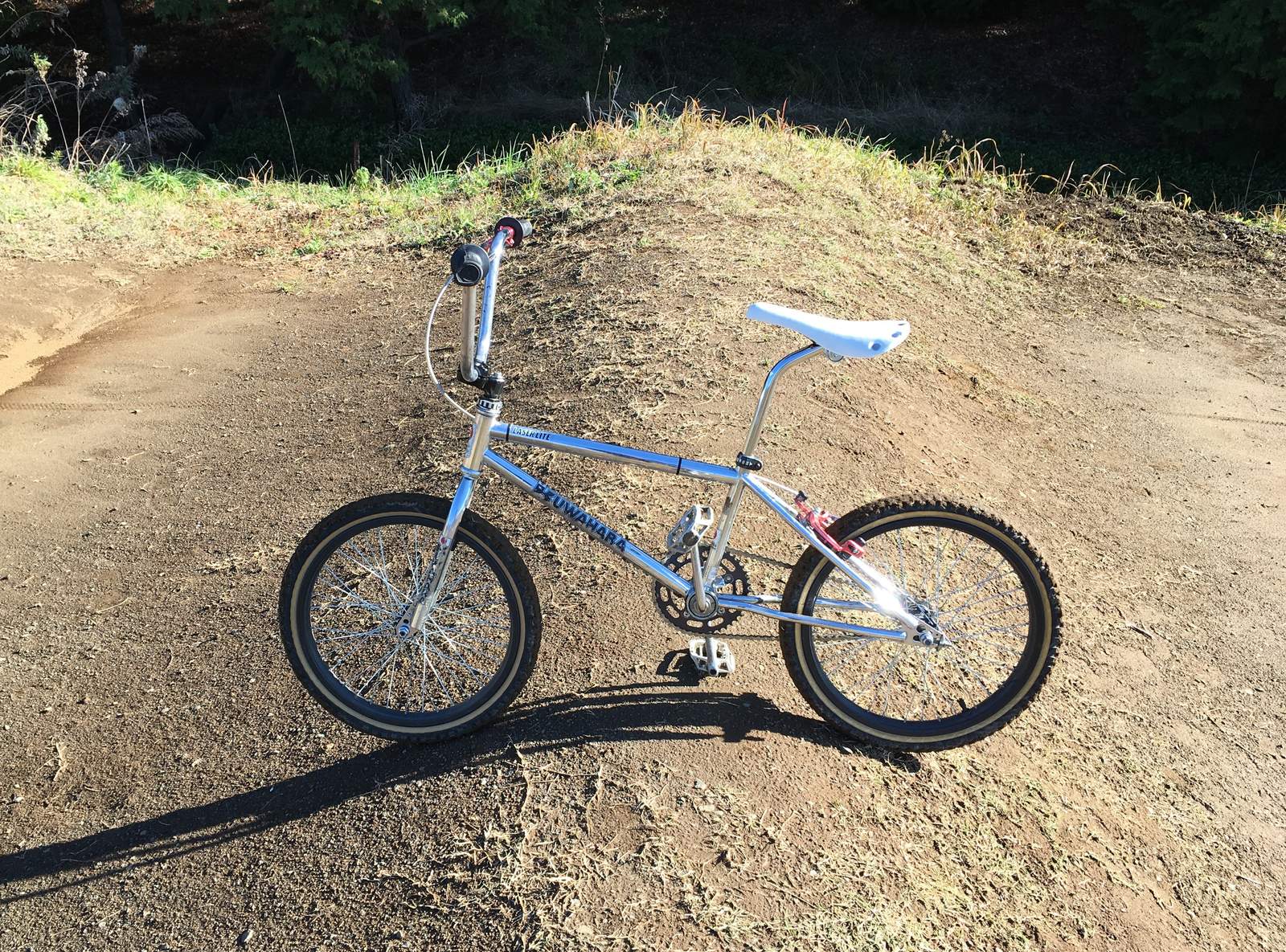 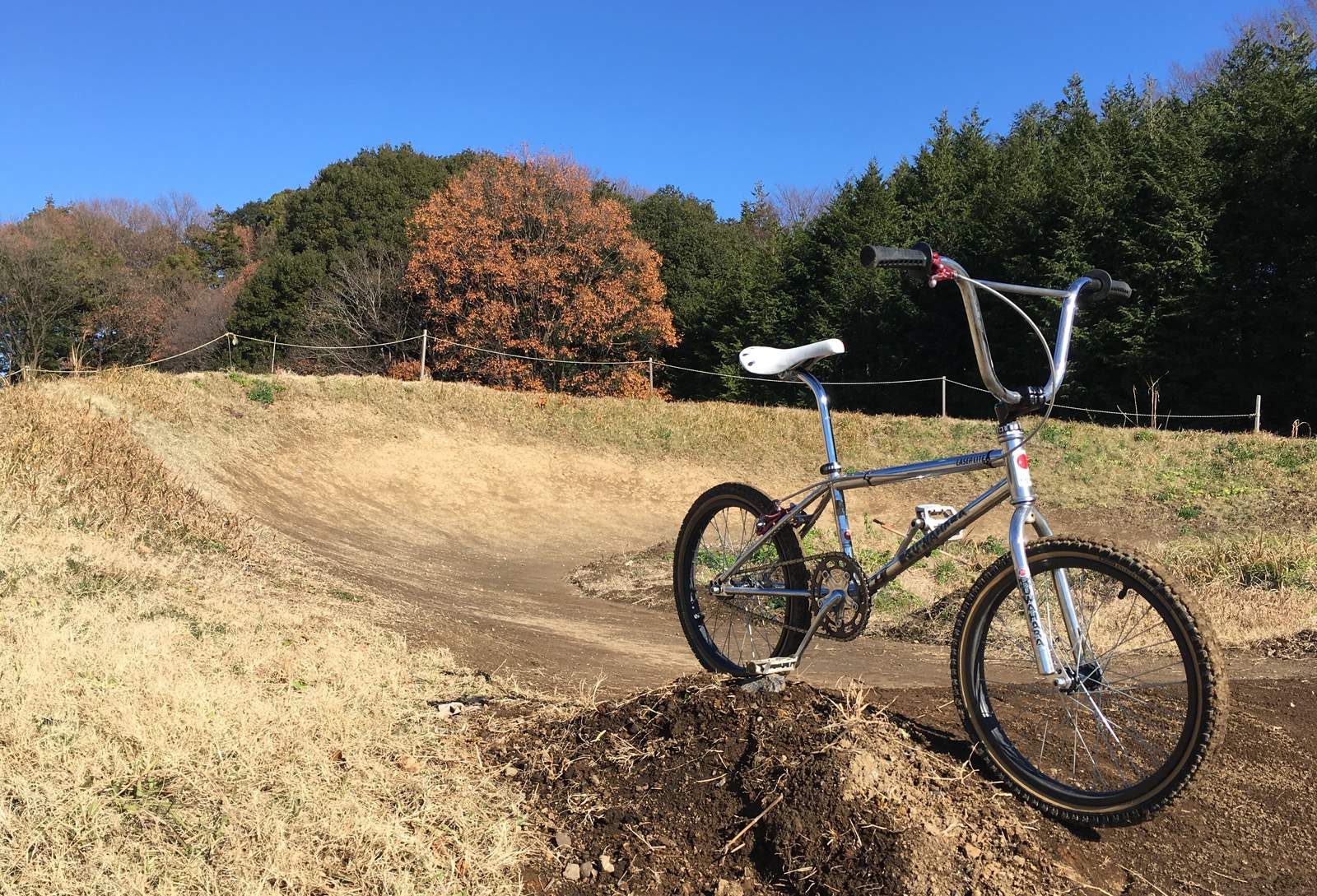 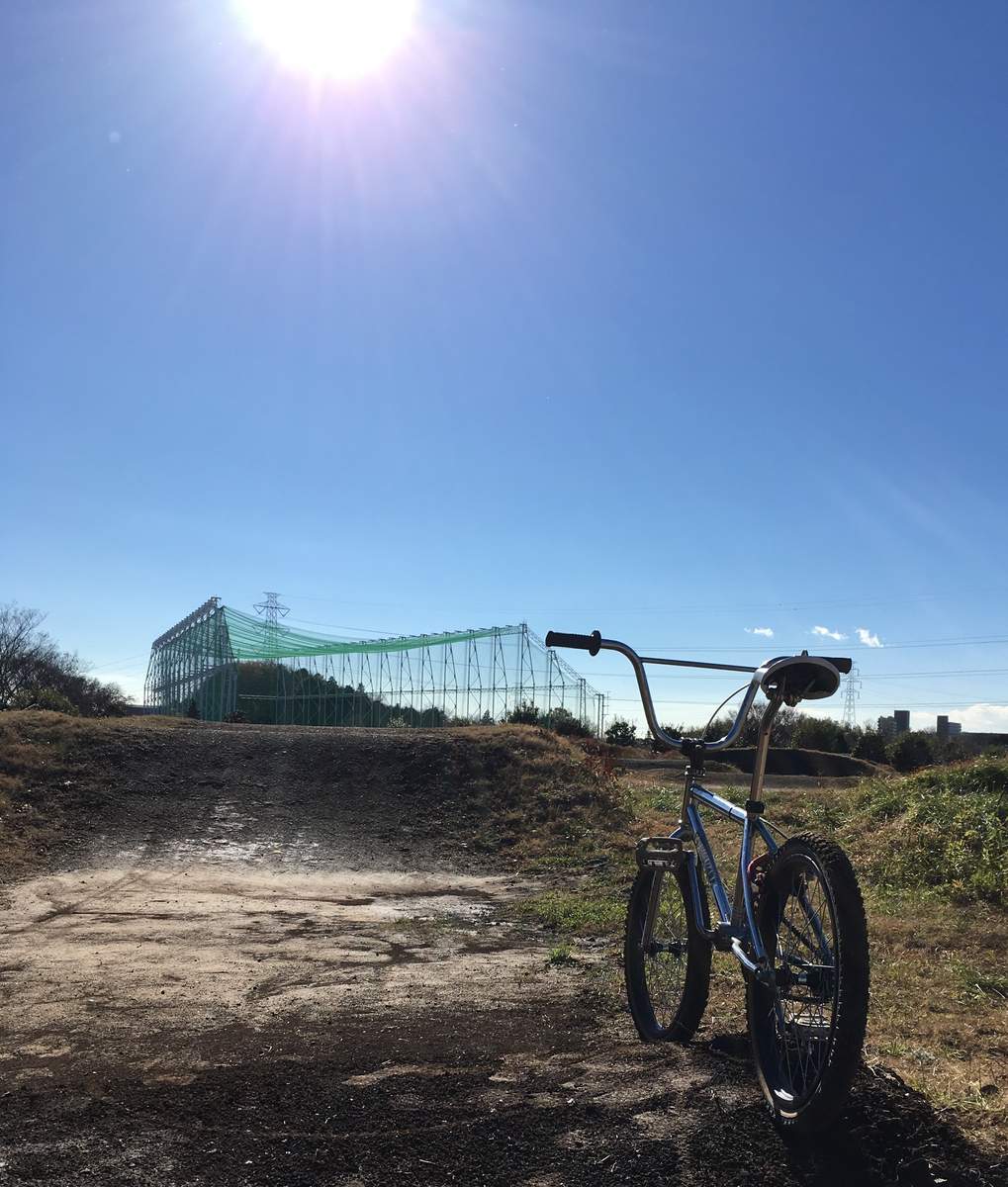 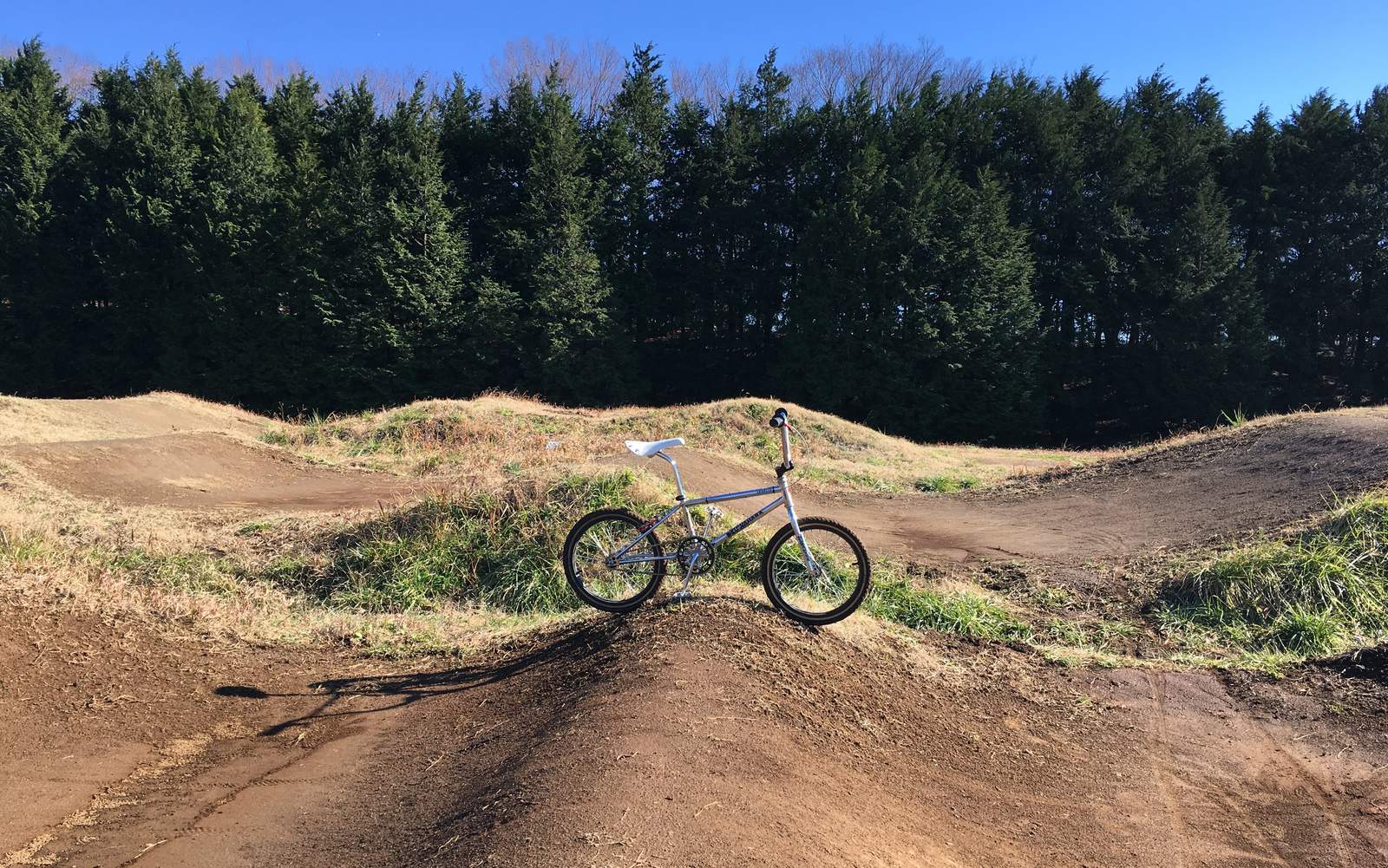 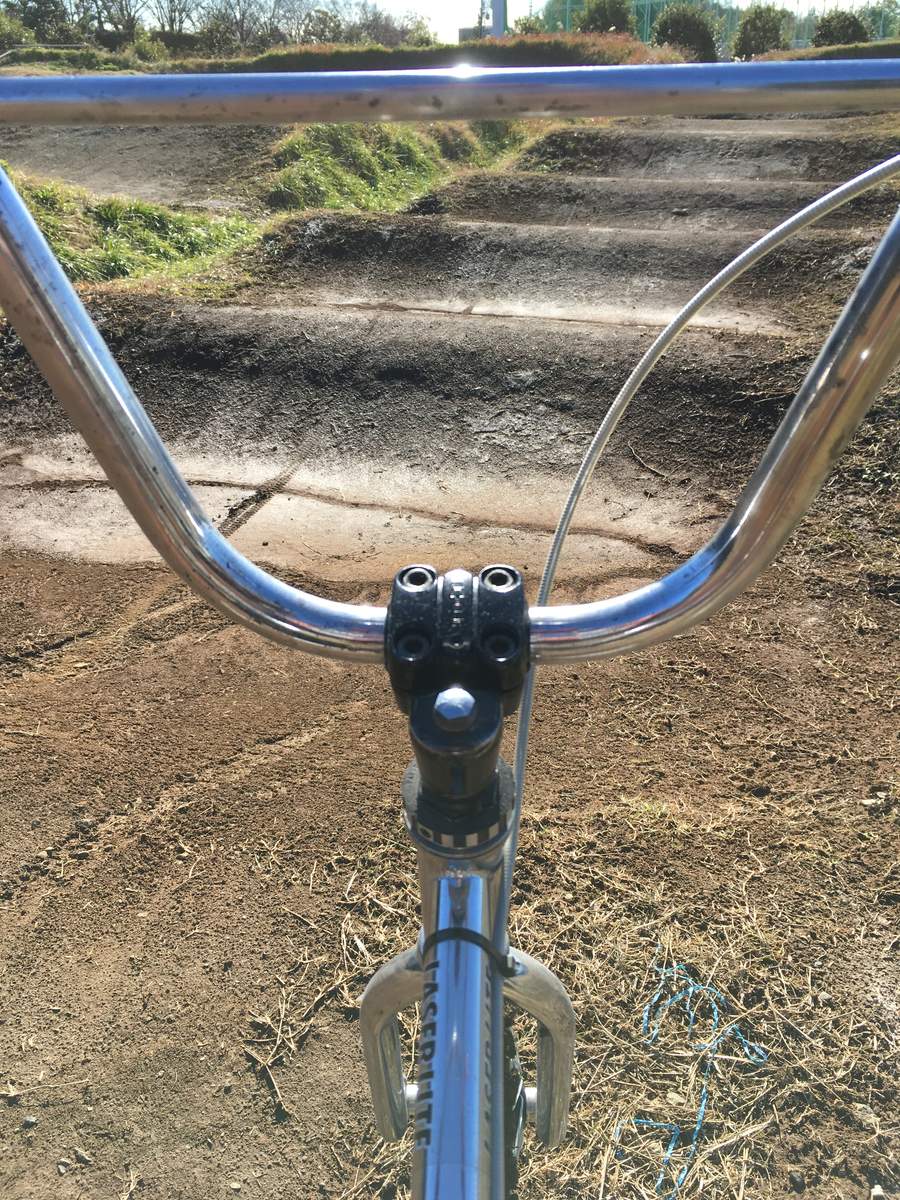 The padded, white seat is not a permanent change, just a temporary one to help with the 26km round-trip!!

Cool to see you getting some track time on the bike.

Thanks! Yeah, it was good to roll back the years.

From moment to moment, no matter what your circumstances are, you have two choices, light or darkness...

PS  Awesome to see you out riding and enjoying your kuwahara!

Frankn kuwi u lined em up like the 3 stooges and back slapped the fork out the glitches!
Pimmp Status!

Thanks for your comments guys!

This thread should help to explain things, or at least the comments by Moonster do:-

Like many I guess, I'd always understood that a T-serial meant Tange-made, whereas it looks like it actually means that Tokyo Kogyo made them, in the case of my Laserlite, with Tange tubing. I'm therefore assuming that if Tange actually made/fabricated/welded the frame themselves then it would have a Tange stamp like this:- 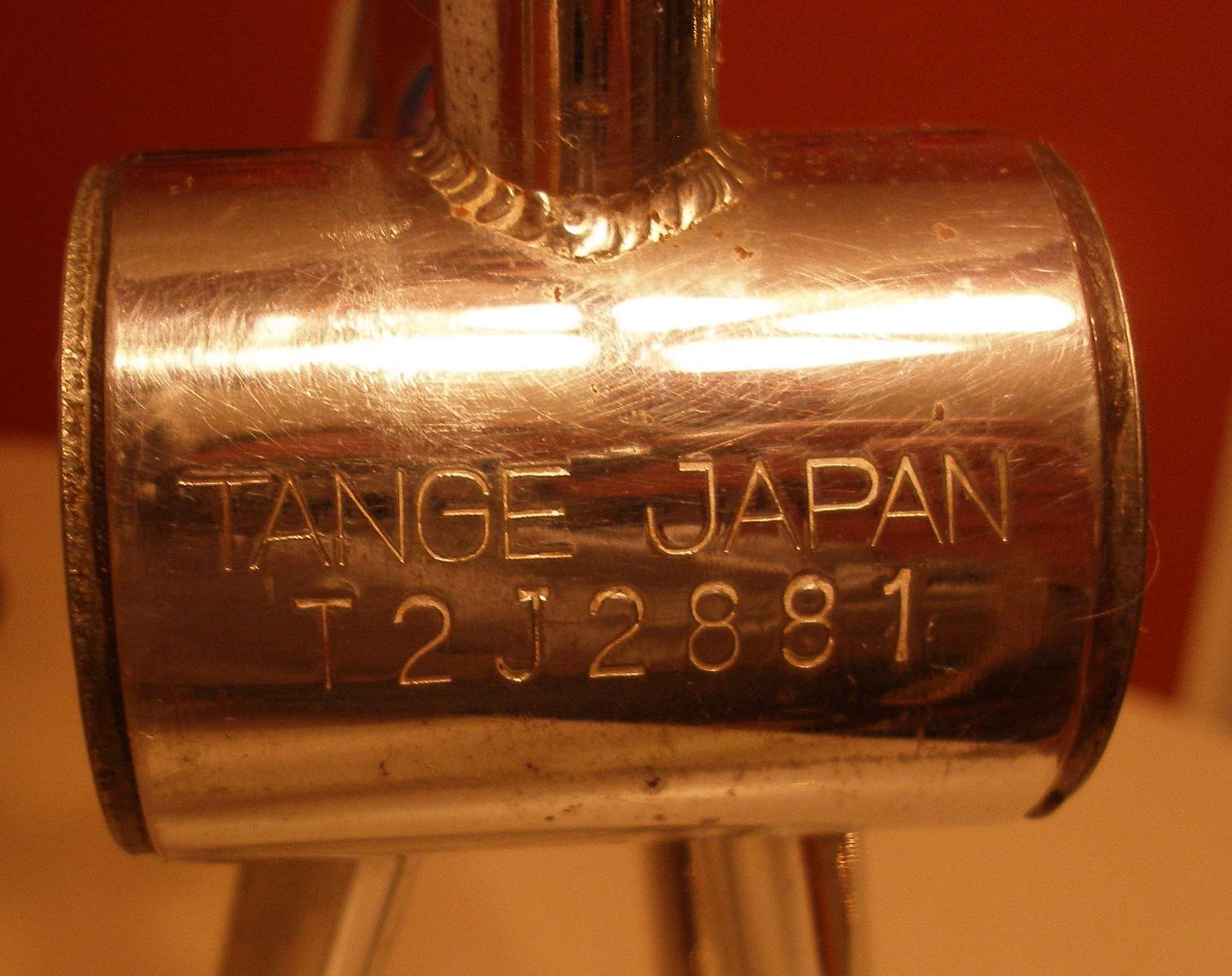 That's only guesswork on my part. Interesting stuff though!

A giraffe's coffee would be cold by the time it reaches the bottom of it's throat, ever think about that?....... No, you only think about yourself!

Thanks mate, appreciate it!