VDC-built racer for the UK market

So this is my Trident, a transatlantic collaboration between VDC and Hot Wheels, a British BMX shop on the south coast of England. The frameset was one of 100 made by VDC in California and supplied to Hot Wheels for distribution in the UK under the Trident name. I bought mine direct from the shop in the mid-Eighties and had to put some of the stickers on myself. It's 100% chromoly and according to the serial number (as confirmed by Voris Dixon), it was the 93rd bike off VDC's welding line in September 1983. The frame's distinctive design feature is a small oval section of tubing where the top tube meets the seat tube, as seen in the fifth picture.
The rest of the bike is a mish-mash of parts collected from bikes that I built up and chopped and changed in the Eighties, ranging from a Cycle Pro to a Redline to a CW Freestyler. After a brief spell with me at university in 1993, the bike was garaged until it was put into storage for proper in 2004. There it stayed until 2011 when I thought it was about time to dust it down and sell it. Unfortunately (or not, as the case might be), I didn't have time to do anything other than take these pictures, so it remains in storage until I get round to doing something with it! As you can see from the photos, it's in used/survivor condition and yes, I know that the bars are too far forward and the seatpost is too high but what can I say, it was my daily rider! Here's the parts list, as pictured:-
* Trident frame and forks (made by VDC in 1983);
* no-name bars;
* Suntour power stem with Suntour locknut and flexfighter;
* Skyway Tuff 2s;
* Takagi 175mm one piece chromoly crank;
* Pete's Precision Products disc;
* MKS Graphite-X pedals;
* Kashimax Aero seat;
* no-name layback seatpost;
* Dia Compe seat post clamp;
* Dia Compe MX 1000 brakes with Tech 3 levers;
* Copy (non-ODI) mushroom grips

cool i live in the south of uk, i see you live in japan how did you randomley buy this are you english? sweet bike tho and if you do decide to sell it let me know, would be nice to get the bike back to its home place lol

Another southerner!  I'm originally from Dorset but lived in Salisbury for a few years!  Now working in Japan but the Trident's still back in Blighty, stored at my mate's place!  I therefore make do with a Haro Group 1 as my daily rider though keep hoping to find an old Kuwi!

Just had a look at your bikes and will swap my Trident for your CW!

WOW! I live in Traverse City, Michigan. I found 1 of these in our yearly Spring clean up. It's a Blue
Trident "DIRTBIKE" Pro-Series says made in Japan. The serial # is as follows...  35515
An 09
Id post a pic or 2 but my camera is broken. Its still got the Chain-guard, Reflectors, and kick-stand also has coaster brakes. Ive done nothing @ all w/it since I had no idea what it was... I will try and post pics soon! Great paint still holding up awesome for its age. Just needs a few minor rusty parts"BOLTS" an such cleaned up. Thanks 4 sharing Ur info!
Regards, - J

I usually stay logged in all day, so if I dont get back to you right away. I will "asap"! Old School All The Way!!!! The Older I Get! The Better I Was!!!

WOW! I live in Traverse City, Michigan. I found 1 of these in our yearly Spring clean up. It's a Blue
Trident "DIRTBIKE" Pro-Series says made in Japan. The serial # is as follows...  35515
An 09
Id post a pic or 2 but my camera is broken. Its still got the Chain-guard, Reflectors, and kick-stand also has coaster brakes. Ive done nothing @ all w/it since I had no idea what it was... I will try and post pics soon! Great paint still holding up awesome for its age. Just needs a few minor rusty parts"BOLTS" an such cleaned up. Thanks 4 sharing Ur info!
Regards, - J

Sounds like yours is something different, as the VDC Tridents were built in the USA. Some pics should confirm it. Thanks for checking out my bike anyway!

i have no idea.. to much kuwi research in my brains..

Sweet looking bike MickRich! I definitely see the similarities to my KZ-1.

I have a BMX Annual from 1985 with a double spread picture of a Trident. I always liked the look of it and thought it strange that I had never seen it mentioned anywhere else.

I have a BMX Annual from 1985 with a double spread picture of a Trident. I always liked the look of it and thought it strange that I had never seen it mentioned anywhere else.

Thanks for the comment. Is this the picture in question? If not, I would love to see a copy of it!! 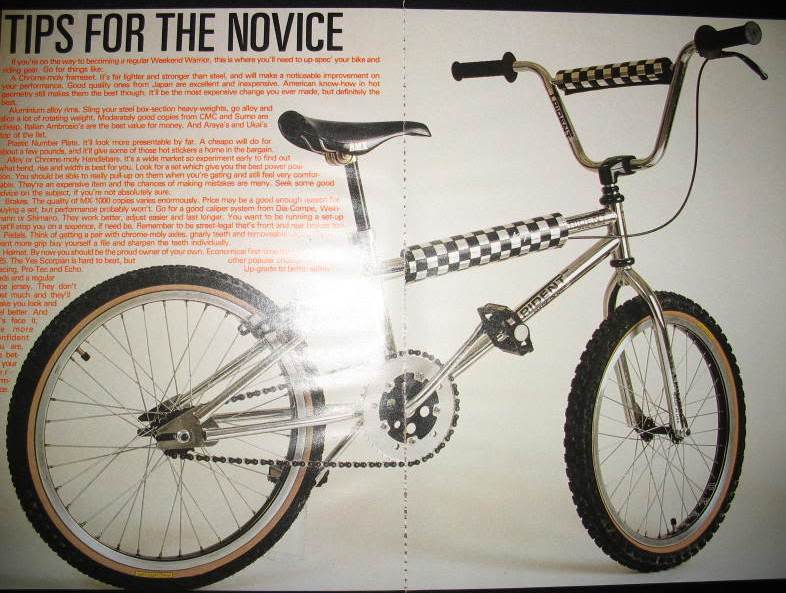 So far as I'm aware they were only ever sold as a frameset, though I guess Hot Wheels could have built them up to the buyer's own spec. Sadly I could only afford the frameset back then!!

& I'm not sure how many VDC actually made but judging by how few are about now, my guess is not that many. Since they were only sold at Hot Wheels, I don't think they were that well-known further afield.

Yip, that's the one.

Nice clean lines, no gussets, limited numbers, and knowing that it's built by VDC, that the cherry on the cake.

The funny thing is that I had a bit of a complex about it bitd. It was light and I loved how it rode but no-one knew what it was, so I got fed up of trying to explain it to people, and envied my mates on their more popular and well-known T/As and GTs. It's only since I've got back into the old school scene that I've come to really like to the low-slung top tube with it's distinctive oval section. & of course the VDC connection helps!

Have taken a few more pics including some with my old Dyno plate, Cal-lite pads and Pro-Lite race jersey! 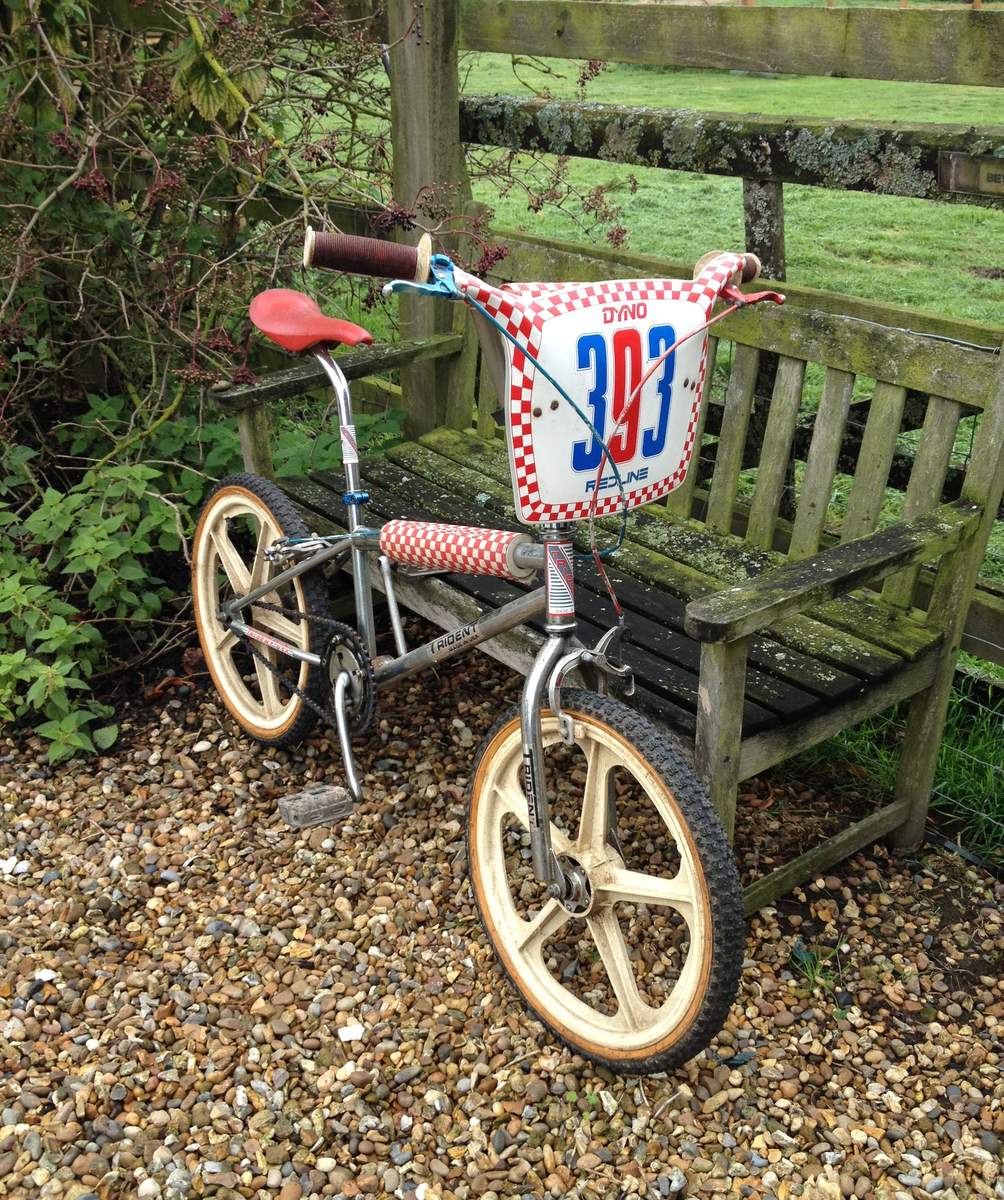 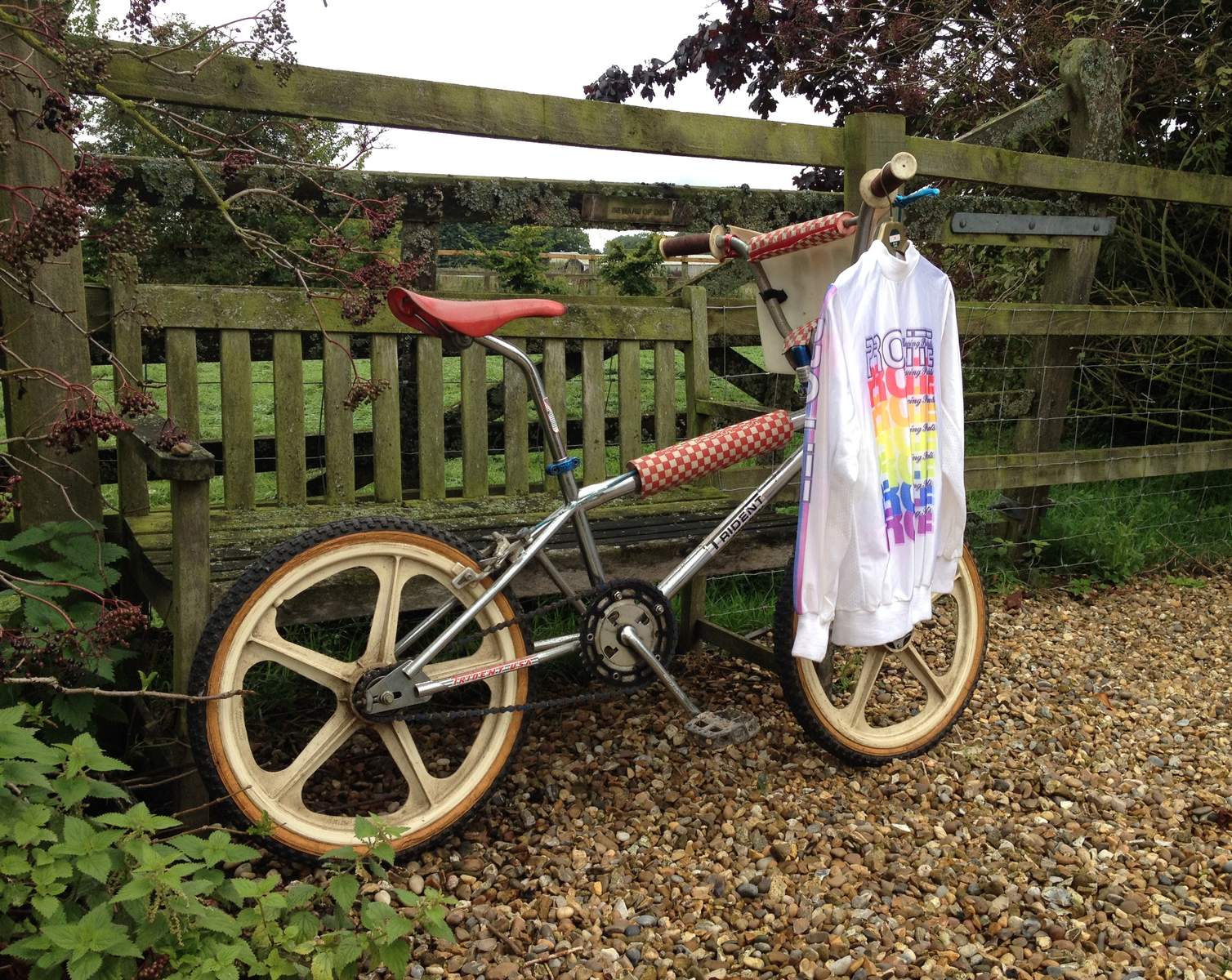 Very cool bike.  You can definitely see the VDC influences.

There's no help for this Museum Junkie!

"You're such an inspiration for the ways that I'll never ever choose to be."  -   Maynard

Very cool bike.  You can definitely see the VDC influences.

Cheers! I've heard that they were made using a combination of tubing, dropouts and brake bridges from other bikes on the VDC production line at that time, such as National Pros and GHPs.

mate i love your style ..survivor is the gold and that will definitely tell the ages of the thing.. lovely mate.. we are in the same boat..mate tho jersey is awesome mate..

Thanks Sabel! Glad you like it even though it's not Japanese, though it does have a few Japanese parts on there!

Hope all is well in Malaysia!

I'm pretty sure Hotwheels did some complete bikes using the Trident Frameset - at least I remember BITD the staff there being very keen to sell me an unstickered bike that they claimed had been made specially for them - can't have been too many that fit that description right?

But I held out for a Torker ..... which was nicked within a week

Hi mate, and welcome to the Museum! Yeah, given the choice a Torker would have got my vote as well! Kids eh, what do they know!?

Don't suppose you remember whether the Trident complete you were offered looked anything like the magazine-featured one above? I guess it was an easier sell than the frameset alone. I wonder how many they sold?

In any case, thanks for dropping by and say hello to Dave from me!!

Had one of these myself. I bought frame and forks in 1983 from Tony's BMX in Exeter Fore Street, UK. It Looked very similar to yours and ended up with White Skyways, CW bars, beartraps, dia compe brakes. Kashimax Aero etc - the usual stuff from back in the day. Raced it at Newton Abbot and Exeter and ruined my shins for life on the pedals! Good days tho!

Nice one!! Always good to have another Brit on here! The Tridents are pretty thin on the ground these days - have you got any pics of yours from back then?

Welcome to the Museum btw!

Thats pretty badass, never seen one before and Im digging it

Thanks man! I'll trade it for your Jayhawk!

Another small production bike by Voris. Like the way you built it.