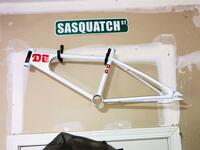 I got this bike for Christmas in 1979, It originally was white/red components. I cracked the frame on the chainstay crossbar and retired it for a while. Later I took it to school and had my metal shop teacher weld up the crack, painted it green and put white components off of a GT performer and rode ramp with it. Everyone at that time was riding GT Performers, Haros, and Hutch Trick Stars.  Then there was me rockin' my green/white DG, that got some attention.  Right after high school I would have friends come over and play air hockey in my garage, so it got painted again, blue this time, and we would drink beer, play air hockey, and trade off riding it around in the middle of the night through the neighborhood, it was a lot of fun. I believe it got dismantled for space in the garage to fit my car in there to work on it. So it finally retired to the top of a freezer, avoiding many trips to the dump. (luckily).
Years later I saw it sitting up on that freezer and thought I'd build it back up again with a few parts I had lying around in boxes and on shelves that also avoided the garbage can. I rode it around for a few more years until my son got old enough to ride bikes and gave it to him to ride. It's now mine again since he's now an adult, and isn't interested in these old bikes like I am.
This bike has always as long as I've owned it been a thrasher, even when I got it at 10 years old. It deserves to get a full on restoration but it wouldn't seem right to me to do that, maybe someday.
If I had to get rid of every bike I have and keep one, this one would be the one I'd keep. 40 years of memories would be tough to replace.

it's about time to do something with this bike. maybe just powder the frame blue and leave all the same parts on it?
Ideas?

Dude....that DG has some cool history....i'd give the old beast a full resto....powder coat it blue and polish the rest....

yeah, that would look like my other one though. maybe white with red again like it was originally.

what should I do with this bike? leave it as is? restore?

I would have to agree with frizzbat; if you don't want it to look like your other DG you could change the color on some of the components (maybe black grips and seat ?); the plus side to getting it powdered is you can also fix any welds or tubes that need attention.

That's a great story. these old bikes have a way of making you relive old memories.

these old bikes have a way of making you relive old memories.

if you don't want it to look like your other DG you could change the color on some of the components (maybe black grips and seat ?);

on this DG? or my other one? I might change a few things on that one too.

you know what...i went back and looked at your other DG and i wouldn't change a thing on that one. that's a beautiful bike, along with your MX II. i've always been a fan of chrome, black and anodized blue.

on your '79, you'll have to go with the color that you will want to remember the bike for in the future (if that makes any sense) ...after re-thinking my last position on this matter, it might not be a bad idea to go with the original white with red components. you'll have some variety in your collection and you can stay true to the factory state that you got the bike in for Christmas that year..

what would you do with the wheels.. (red tuffs or alloys...)

what would you do with the wheels.. (red tuffs or alloys...)

it came originally with red alloys, but I like red tuffs also. I've just recently started to think about bringing it back to how it came originally, but it's been a thrasher bike most of it's life, and I want to restore this once. so I don't know how I want to do it up, it looks cool like it is also. It wouldn't be to much trouble to powder it up white, polish up the cranks and add a red chainring, red seat and red grips, red seat clamp, red pedals, and later either a red set of arayas/ukais, or red tuffs.

a lot to think about

I think it would have to have red tuff 2's. big fan of skyway mags

I'm liking the thought of that, too. There was an '80 (?) white proline with red tuffs that sold on e-bay for 1.2 k a little while ago--absolutely beautiful; classic combination.

I saw that, it was nice! this one originally had that same color combo, and it was the only one like it that I ever saw. and to this day I haven't seen another DG with the same color combo, so that would be cool to do it up like that again. I'll get over to my folks and go through the pics and see if I can find an old photo of the bike. there has to be one somewhere, I remember my dad taking pictures of me riding it.

I looked through all the pics my folks have and couldn't find them at all. didn't have a lot of time to keep digging but I'll get back over there when I have more time to look.

just added a set of rims to this and yarded out the mags.

just added a set of rims to this and yarded out the mags.

(?) I thought you were switching to mags to replace the blue alloys....what kind of rims did you add?

that was on my other DG. I took the rims off that one and added black skyways, took the white diamondback mags off this and added the blue alloys to this DG.
I thought they look better on this DG than my other DG.
there sumo rims.

went for a ride the other day and took a few new photos.

this bike is getting some transformations and a few parts off my other DG. just waiting on a chainring for a set of redline flights I have. I also put the chrome forks back on it that came with this bike originally.

Just updated a couple pictures today and now thinking this is how I'm going to keep it, a fun rider.

I've given it a lot of thought here lately, and now I think I'm either going to put it up for sale, or trade it strait across for one of the new Haro Freestyler 26".
I'm probably not in the right forum to post a trade offer or sale offer like that...

STORMRIDER
The Lady of New York