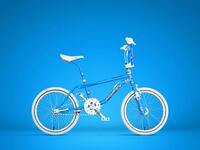 I love that the cranks' finish looks original.

Some people need to get down off of their crosses, use the wood to build a bridge and GET OVER IT!!!!
I don't build bikes. I just assemble them.

Great collection you are building...  everything is perfect!  Well done!

Bikes are dangerous. Always wear a helmet when riding your bike.

you have to stop building these awesome PFT bikes!!! I'm barely saving up for mine

Hi I'm fairly new to this web site. I like your GT PFT. You say it's a early January 87 bike. I also have and early January 1987 PFT. Wouldn't it be amazing to see these beauties together again. I noticed that you didn't share the serial number. Is there a reason for this? Is it a bad idea to do this. I'm just wondering who between us has the lower serial number. I have yet to see a lower number than mine. It would be cool to see. Plus what does the FS stamp on some of these bikes mean? Anyone?

i saw your bikes since 2 years ago, and your work inspires me to join into bmx museum, i like to see how do you build the most exact og parts like the manufactors offers back in the day on catalogs, man is a pleasure to see your flawless jobs in all you show bmx, cheers!

This is literally the most amazing GT I think I've ever seen!! Dude your lucky as hell !!

Mate what a amazing GT. Full stop. Love it.

If they told you that wolverines would make good house pets, would you believe them? - Del Griffith