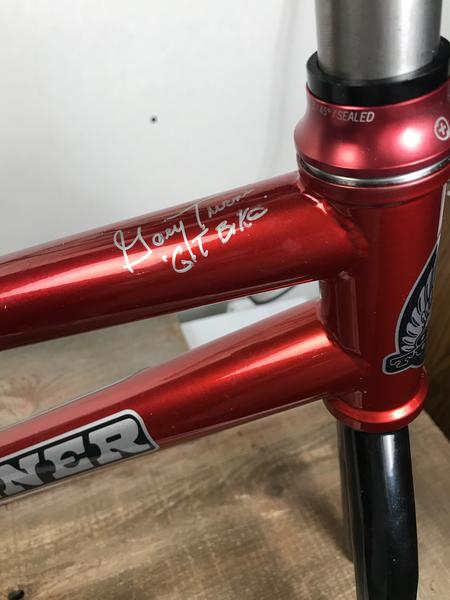 Custom one of one GAry Turner pedaler 24 inch cruiser frame set with 22 inch top tube, custom candy red powder coat, integrated headset included and GAry Turner Fork. I have this built for me in 2017 just prior to the 45th anniversary badging on the production frames the geometry and paint are custom this was the only one  in this color it is also serial number seven in the peddler line, and I only believe a handful of the peddler frames that were built before they dropped the modern geometry gary Turner line  Maybe 20 or so.   I also owned peddler number five which was in the same color, however there was a defect with that one and it was returned and destroyed and this one built to replace it. Autographed by Gary Turner on the top tube. this was built into a bike and ridden not much, street only, a couple small scratches here and there and the drop outs do show a wheel being inserted.  Otherwise it’s like brand new  $20 shipping in continental USA.  USA shipping only. Trades considered for 1985 Or 86 USA made GT freestyle frame sets or Dyno frame sets.