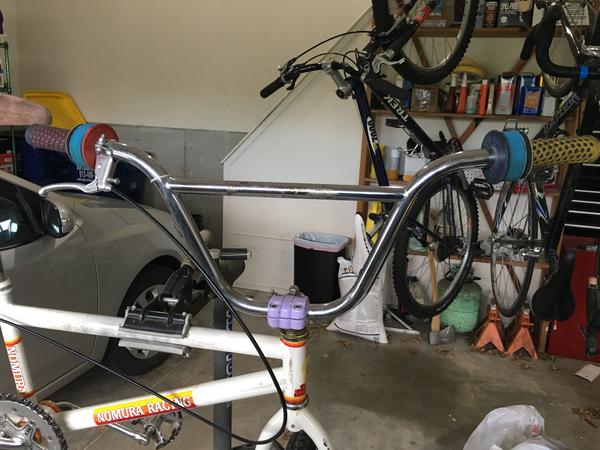 Ok, I took the criticism from the what's it worth thread to heart, went pro, and here's the ad. As previously discussed, this bike belongs to a friend, and it is now officially for sale. We have seen a lot of advice about where to sell it for the best payout and whether or not to keep it here so it goes in the hands of someone on the board, so this group gets right of first refusal.

There is quite a bit of info about the bike in the "Protocol for asking for bike value" thread under the "What Have I Missed" section. Here's the short version:

Frame: Nomura Chromoly
Forks: Bottema Chromoly
Bars: Unknown (in the picture of the crossbar, the stuff on the chrome is the glue from the sticker)
Other components: As seen in the photos

This bike was raced back in the eighties and is exactly how it was when the owner stopped racing at that time.

Final price will be accepted offer PLUS actual boxing and shipping. The bike will be boxed correctly for shipping by a local bike shop. 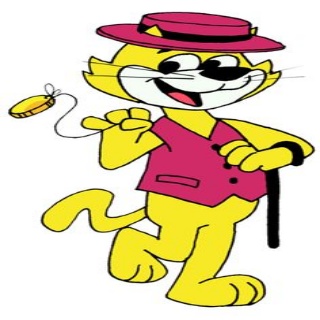 And there you have it boys...

I wasn't able to upload all the pictures with the 8 picture limit. Please feel free to post or PM with requests for additional pictures. We have a bunch and can take any additional you might want to see and email them directly. 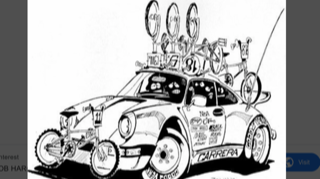 Thank you for your offer Wiz. I think we will pass on that for now.

I appreciate the quick answer, best of luck. 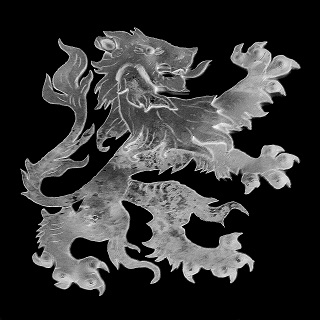 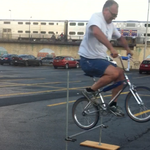 toowheelz: I never told you (or even hinted) that the bike had been sold. You made an offer, and I told you that we had been offered significantly more. If you feel it isn't worth what's been offered, I understand. Not everyone places the same value on an item. So far, we have been contacted by several people who feel it is worth at least somewhere in the ballpark that we have advertised even though it is the Chromoly frame (which is more rare as they made a less than the aluminum frame).

Thanks again for your interest

old bmx dad/Ted, I'm not sure how to respond to that. Thank you, maybe, for saying the tires look great?

I think the $7,000 reference point price was a suggestion from a member here on the site to jayhawk261.

I offered $4500 cash in person and he didn't counter-offer me...hey "Wiz it takes $6000 in person in Olathe"  I put my offer in the comments on purpose...transparency is vital with a "New Seller" that tells me he's suffering from paralysis of letting the Golden Goose(BMX reference) get away, I doubt he would've taken $6500 yesterday 20 min after he put it up, even on a nerd BMX site, people love the fame and notoriety that comes with a rare find..even if it's only 15 min worth, myself included.

BTW - Brian Hays nailed the value, anyone who pays more just wants to say they own a Nomura (again myself included).

Look everybody, at no point have I been disrespectful to anyone on here. At no point have I said rude things or said someone is just trying to get the bike for less than it's worth. In the other thread, people made it clear that this bike should go to someone on the forum because I had come here first looking for help and info. Pay the $20 and place your ad they said. So, I did. Now so far, I have been accused of misrepresenting the bike because someone thinks the tires look too nice, accused of selling it for $5k and then backing out, and accused of "wanting my 15 minutes of fame" all because I followed the advice of some members and paid my $20 and advertised it here. So glad I did that.

Look, I know how the internet works, and I am truly sorry if you guys think I am playing some kind of game. Are we trying to get top dollar for the bike? Of course we are. We'd be stupid if we didn't.

Wizmo, go ahead and offer of $6500 and see what happens

By the way, in my experience when someone makes an offer like yours with a time limit and literally a take it or leave it statement "Makes me no difference, this offer may or may not be enough to buy it, I just need an answer in the next 60 minutes" negotiation is wasted breath. We are happy to have more conversation with you about it if you are truly interested. But, to say you put your offer in the comments to trick me into giving some kind of response, it's clear you aren't necessarily interested in the deal but to say something about me personally. Again, my apologies if I have offended you in some way.

I absolutely WAS NOT being disingenuous, ugly, or disrespectful with my comment, in no way, shape or form.  I was very careful to include myself as someone who gets excited by a rare find.  However; I feel differently about my offer, I typically don't like to let people have my offer in their pocket for a few days and see if something better comes along, if not....sure I'll sell it to Wiz...he's still standing there with cash, in person, in Olathe, with zero requirements or shipping problems etc... I think you don't necessarily know what it will bring and you're exploring what that number is, and I want to be clear "I don't blame you",  if the idea that I offered to drive to Olathe and pay $4500 cash in person for a bicycle and I wanted to know yes/no in an hours time, presents as some sort of "trick" to you and that I am not really interested in buying your bike...please accept my apology.  The offer was absolutely genuine.

I actually mis-communicated when I said "makes me no difference" I meant you could respond to my offer in the comments, that was fine by me, again no malice.

Best of Luck with your sale.  I mean that sincerely, and I hope you stay around the Museum after this is over and become a part of our community.

Thank you for the clarification Wiz. Just to note, you literally wrote this:

"I put my offer in the comments on purpose...transparency is vital with a "New Seller" that tells me he's suffering from paralysis of letting the Golden Goose(BMX reference) get away, I doubt he would've taken $6500 yesterday 20 min after he put it up, even on a nerd BMX site, people love the fame and notoriety that comes with a rare find"

I didn't take that to mean it wasn't a genuine offer but that by putting it in the comments, you expected a certain response that would out me as looking for my 15 minutes of fame. Maybe I misunderstood, and I apologize if I did.

I should mention Jayhawk just sent me a very nice PM...explaining his position.

Thanks everybody for the help! 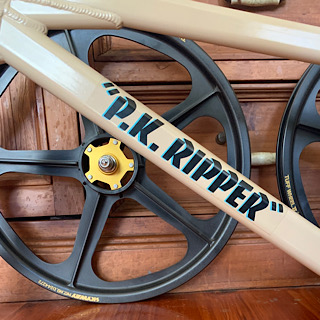 Someone has a nice bike now. Congrats

NO idea how I missed this for sale ad. Whatcha guys talking about??

Sometimes this place really disappoints me. Like the seller said, he was virtually stoned to death for NOT posting the bike for sale here, so he did and looky what happened. (NOT directed at Wizmo.)