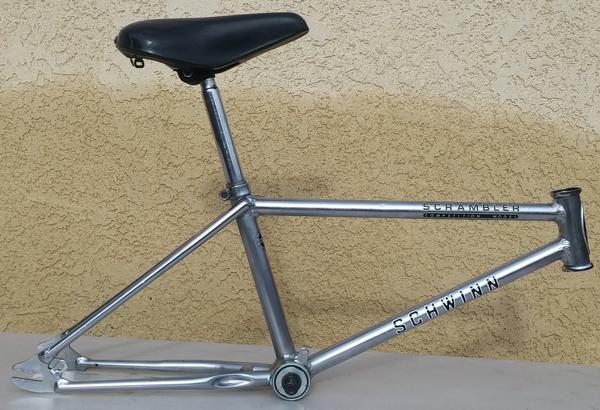 Rare mid-year 1977 Schwinn Competition Scrambler frame and some goodies. Full hand-braised 4130 goodness in the extremely rare chrome finsh. March of '77 production, the only other known example (also produced 3-77) shares the strange not-quite nickel/not 'show chrome' finish.  As you can see in the pics, the graining in the metal is clearly visible, the finish is not very shiny, and has little black specs in it which look like over spray speckles from a rattle can. The specks do not appear to be the result of an OA bath. This appears to be the way it left the factory.

At some point in it's life someone took the head badge off and stripped the holes- the replacement (vintage not repop) badge and screws are held in with silicone. Mom or dad's DL number is engraved in the DT just like the police used to do on Bike Safety Day, one tiny dent in the TT is highlighted in the last two pics (red circle). It's small, but there, easily hidden with a frame pad. TT decals are NOS originals, DT and seatmast coin are reproductions. Drops are beautiful, showing only a couple light marks from the original star washers.

This is as Schwinn as it gets with over $150 in the extra bits and decals alone.  I just have too many projects going and it's time to fund them.

Hobson's choice- I will separate, but will not part individually. If you only want the frame, the oddball post and clamp and I keep the rest of the bits it's yours for $250 shipped (domestic). $375 nets you everything (and I'm eating more on shipping

) I will not sell the bits except as the sweetener for the frame- I definitely need them for other builds but am will to let them go as a package.

Open to trades for a matching pair of MINT early 80's 24x1.75" hoops- prefer Speedlines, but any 7c, 7x, Pro Class... not even picky about color as long as they're sharp, they match, and are not cheapo steelies; I'll build my colorway around the wheels. 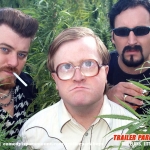 Interesting,Ive got one of these also,not sure what to make of it not exactly a chrome finish,it does look factory.

I'd be curious about your build date in the serial just for grins.