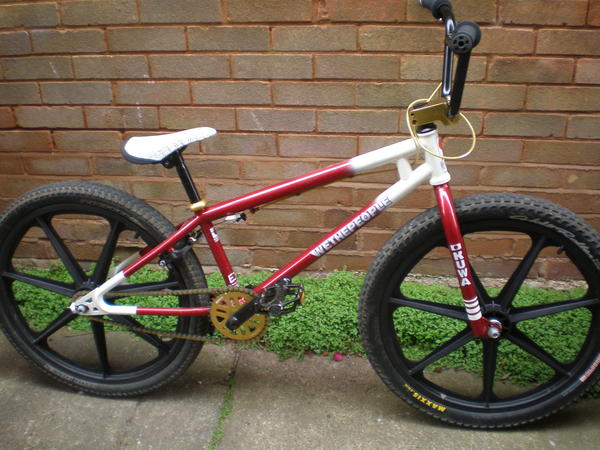 Bought from ebay in 2012.  I had it sprayed white & candy red like Elliot's KZ.  Applied some Kuwahara E.T. decals, then the head and bottom tube decals were drawn with AutoCAD, printed and lacquered to waterproof them.

The only outing it has had other than the photos was a 52 mile charity cycle race across London in August 2016.  Almost everyone else had gears on their bikes..... well I didn't finish last and I hope I cured blood cancer now, because I couldn't sit down for the final 32 miles.  Thanks Kuwahara for your stupid but nicely branded seat.  I also sported a number plate with an RIP Grandfather of BMX Scot Breithaupt picture.

I enjoyed chatting with Scot on facebook with the ideas I was planning for my Quadangle that I wanted to show him and when he was excited about the 2012 Olympics BMX racing.

Modifications from the original Unified 24 include -

More Bikes From p-hawk (3 bikes in museum. View all)