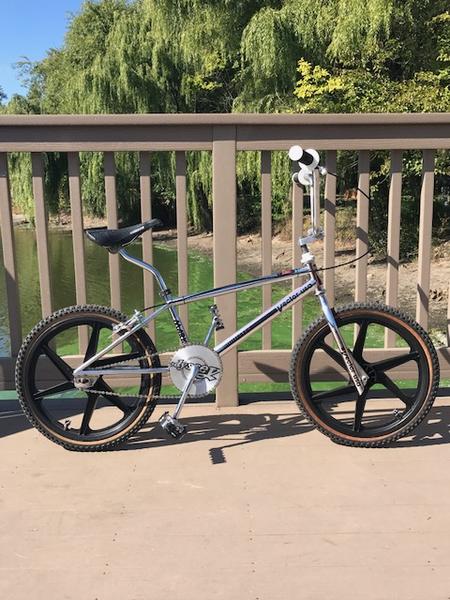 What, This old thang?

Was able to get new decals from 12welvemonkeys aka Darth Vector and had Chris over at Ridgewood Cycle Shop in Ridgewood NJ put them on for me. Legend Bikes in Lyndhurst NJ did some great work on this thing as well. Thanks to you all, great job!

This was the last bike I road until I had a car to drive, then I basically stopped riding. My friends and I used to buy bikes and parts and trade parts when we needed stuff. This was a trade for something at some point. Its been in my Dad's basement for about 25 years collecting dust, literally. I knew it was a rare bike at the time because nobody in my area of New Jersey had one so when pops threatened to throw it out I made sure I grabbed it. I did a bit of research and found this site, so now I have the itch to make it look decent again. I added a bunch of GT/Dyno parts to this for some reason back in the day. I'm sure they were from a bike that Ihad previously.

Special thanks to SSDJoey for the stem swap and 12welvemonkeys aka Darth Vector for dropping serious knowledge about my own bike and about Vector as a company on me. Much appreciated!

More Bikes From CoolRobG1 (4 bikes in museum. View all)