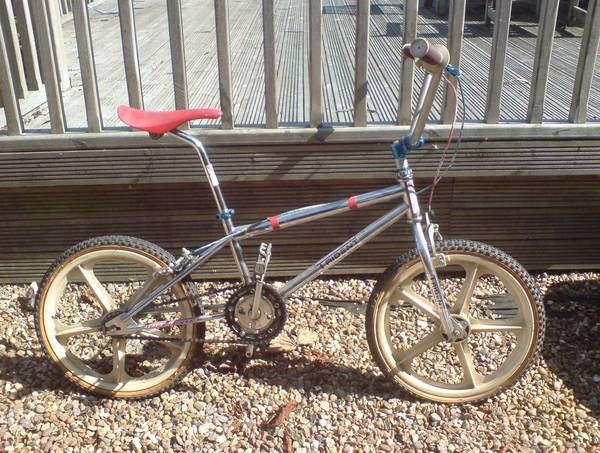 VDC-built racer for the UK market

So this is my Trident, a transatlantic collaboration between VDC and Hot Wheels, a British BMX shop on the south coast of England. The frameset was one of 100 made by VDC in California and supplied to Hot Wheels for distribution in the UK under the Trident name. I bought mine direct from the shop in the mid-Eighties and had to put some of the stickers on myself. It's 100% chromoly and according to the serial number (as confirmed by Voris Dixon), it was the 93rd bike off VDC's welding line in September 1983. The frame's distinctive design feature is a small oval section of tubing where the top tube meets the seat tube, as seen in the fifth picture.

The rest of the bike is a mish-mash of parts collected from bikes that I built up and chopped and changed in the Eighties, ranging from a Cycle Pro to a Redline to a CW Freestyler. After a brief spell with me at university in 1993, the bike was garaged until it was put into storage for proper in 2004. There it stayed until 2011 when I thought it was about time to dust it down and sell it. Unfortunately (or not, as the case might be), I didn't have time to do anything other than take these pictures, so it remains in storage until I get round to doing something with it! As you can see from the photos, it's in used/survivor condition and yes, I know that the bars are too far forward and the seatpost is too high but what can I say, it was my daily rider! Here's the parts list, as pictured:-