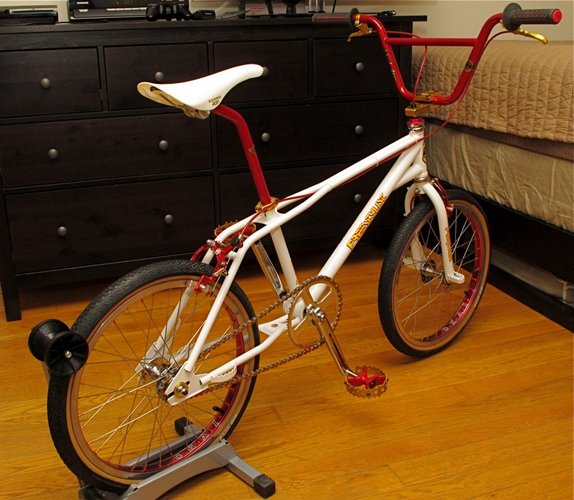 So here is my latest build, with a little background. I began as a racer, but after seeing a live freestyle show put on by Van's, featuring Woody and Martin, my mind was set on freestyle! That show was held at my local track - Braddock Park in North Bergen, New Jersey and they performed right on the last straight. I'm sure I don't have to say how wicked the show was...it totally blew my mind! Even though I had been reading all of the magazines regularly for a couple of years, seeing their flatland show in person was way better than any photo spread. They both blazed through tricks smoothly, yet with a sense of urgency and it definitely left an impression on me. From then on, I pretty much left the track and the 16 Expert class for the freestyle world.

In any case, Martin had just snagged his Torker ride and showed up that day with his Prototype Torker (which also blew me away). It was also my first time ever seeing the Cherry Picker (wasn't even in the mags yet) and I almost couldn't comprehend what I had seen! So, I promptly pre-ordered a Torker Freestylist and eagerly awaited it's arrival. It came in October and I swapped out parts from my other freestyler at the time (a performer, if I'm not mistaken). It took some getting used to at first, due to the geometry and 5" head tube. Soon enough, a buddy of mine got one as well and I soon lost interest in the Torker as a result. Around the same time, I had just peeped spy photos of RL on the RL-20II and I set my sights on that. Once it arrived, I sold off the Torker and that was the last I saw of it! Although I really loved the RL, I always regretted selling the Torker. Once I got back into this OS-BMX thing, I vowed to get one if one ever popped up. Now mind you, late last year, I swore off any new builds, with the one caveat re: the Torker. Wouldn't you know it, one pops up early November of last year! Needless to say, I did not hesitate on snagging it. This one is the 60th production frame set made.

I hope you Enjoy it as much as I do and thanks for looking!

More Bikes From quinonesm (10 bikes in museum. View all)