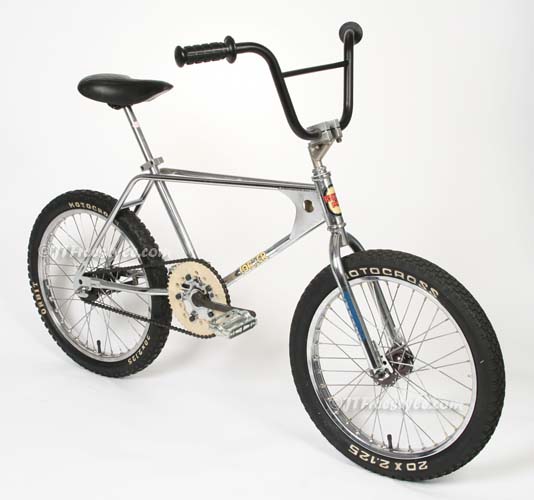 The first frame design was actually introduced by Steve Rink of Peddlepower Cycles as John's son, Doug, wanted a lighter frame to race with in 1975.  Steve Rink and John Johnson had the first frame built under the Texon name.  A very young Steve Johnson took over and called the company Johnson Engineering in 1976.  Approximately 50 Rink Raider frames were made and the double top tube design captured everyone's attention, especially for the larger riders.  Steve Rink and Steven Johnson went separate ways, Johnson Engineering became Torker and Peddlepower became Powerlite.

The head tube was quite mellow at 70 degrees and the seat tube was ultra mellow compared to Redline and Mongoose. The other noticeable difference was the "fish tailed" gussets and forward pressed/welded dropouts. This unique combination combination along with a Speedo dual position fork gave for some superb handling. Soon after the test Steve began production of Torker forks. The pre-production Torker MX frames did not have a drilled caliper mount but when the frames were designed as complete bikes they started to drill them for calipers. My Torker is a pre-production MX frame serial #93.

As stated by Bob Osborn, "What does this mean for a purchaser of a Torker MX? Well folks, because of the additional surfaced area and the double joint contact at the steering head afforded by double top tubes, and because of the highly effective location of gussets, and because the entire frame is made of 4130 chromoly, this bugger is exceptionally strong." Bob continues on handling, "The Torker MX handled flawlessly under all conditions: bookin' down straights, blasting berms, or sailing over jumps."

The bike features all the parts from 1976/77 and this was the year that Redline introduced the Pro Line stem. Pictured is a prototype with square clamps versus the rounded Redline stamped clamps that became famous. The Femco rims were never laced. All the spokes and nipples were polished to get that new look. The inspiration on this was the July 1977 double coverage by the BMX News featuring Kevin McNeal on the cover and Bicycle Motocross Action featuring RL Osborn during the testing of the MX.

1978 Torker introduced the Low Profile model for younger riders like myself and swooped up one to replace my 1974 Redline Square back. I was coined "The Torker Kid" from that point and rode a Torker to the end of their run in 1984.