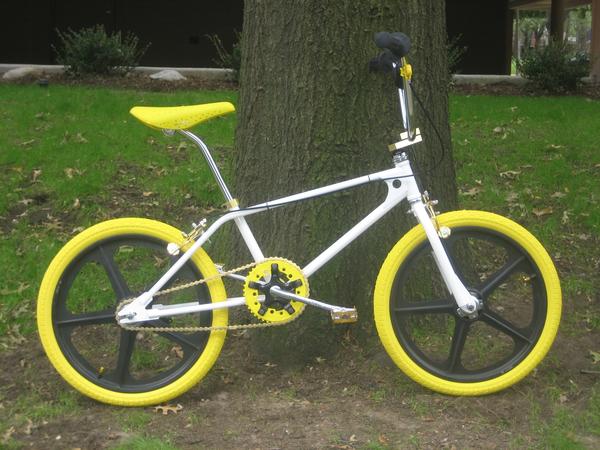 I was always a fan of Bob Haro. Being an east coast kid I only read about him in BMX Action, I never actually saw him ride in person. BITD most of the kids I knew had different brand bikes. One Pal had a Torker that I thought was cool. When I finished restoring my Haro Freestyler I needed a project to keep me busy. A Torker Freestyler would be just the ticket. Of course I had to tip my hat to mister Haro by using his levers, Redline V-bars and a Cycle Pro seat. I have my original MCS 6 bolt neck from BITD that I wanted to use on this build (because Bob ran one),but it is quite beat up and I don't want to restore it. I dig the Torker black, white and gold color scheme from that era. I decided on new white powder on the f&f. all other parts are as-found, some NOS some excellent survivor. I remember one of the first parts I had bought BITD was an Addicks sprocket. The man at the LBS showed me the graphite model. WOW! Something GRAPHITE I can afford! I also ran Skyway pedals because they were GRAPHITE. GRAPHITE, GRAPHITE, GRAPHITE!!! Those sprockets and pedals were terrible. sheared the teeth off of those sprockets in short order and snapped pedals regularly. Never could afford graphite Tuffs BITD, but the pair of standards on this build are from one of my original bikes. I found them in Dad's garage. Never a brake pad on this coaster set and steel hubs that fits the period of this bike, or so I thought. I did a little research before I found this frame and believed it was a standard Torker from 1982 or earlier. This assumption was primarily due to the round gusset hole. The serial number data was not available back then, or I couldn't find it. I don't really like decals on frames. I always removed any decals (they were usually damaged anyway) and polished the frame. Most of my friends did the same and it became a bit of a "guess the bike" game for any newcomers. This bike I was going to sticker with a repro set until I discovered the headtube badge wouldn't fit. That is when I realized it was not what I thought it was. It has the same machined headtube from the Torker built Haro Freestyler and the round gusset hole of the early Torker. This info along with serial number data led to the correct determination that it was built in early 1983. So much for a pre-Haro, Haro. but pretty close. I parted this bike out years ago, but still have the frame and fork. P.S. Sorry about the cheap Kenda tires. Do you know how long I waited for a set of yellow Cycle Pro snakebellies to turn up?

More Bikes From OMlanded (4 bikes in museum. View all)