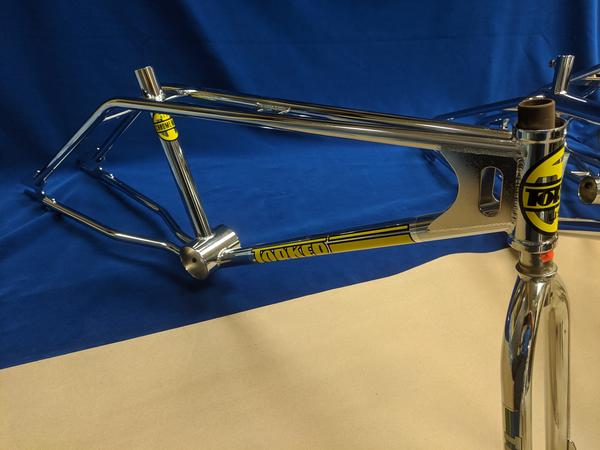 NOS Torker Low profile frame, LP is very scarce frame for this year. The frame is TPP serial number which indicates it is a low profile frame. The Torker box was dated 7-31-1984. NOS Tioga forks

I won this bid on Ebay in Sept 2019. I put in my bid a couple hours prior to the end of the auction, saying to myself...that's it, I'm not going to look at it again until after the auction was over. Later on, thinking the auction was finished, I looked however it wasn't finished but had 10 seconds to go, and I wasn't winning. Somehow I managed to put in a last second bid to win it. Later I found out that my friend and fellow Museum member Shorkcorp (Shawn) also was bidding for it with his Max bid only a few dollars less than my winning bid. Lesson here, the discussion of potential Ebay bids with friends PRIOR to bidding would've been helpful so we don't bid each other up!

Seller was Jeff H out of GA. It had been with him for decades, put away and protected in it's original Torker box. I
Subsequently, I purchased the NOS 1980s Tioga forks off another Museum member Orreofarms.

More Bikes From Riders ready (16 bikes in museum. View all)