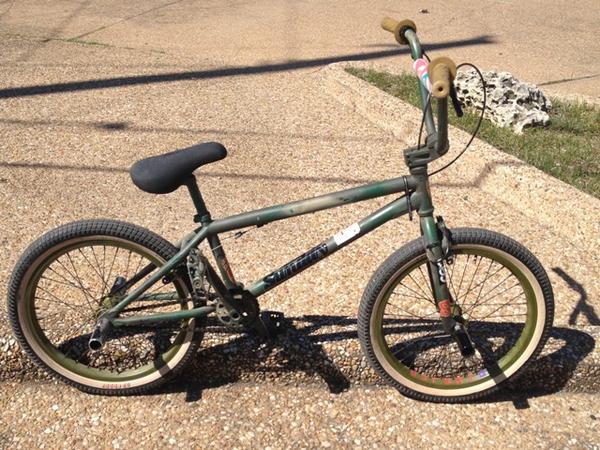 I picked this frame up from the warranty pile at Sunday when I used to do sales at Full Factory.  Long story short, some kid tried to be shady and claim a warranty on a dented head tube because he bashed his frame into the ground on purpose.  Needless to say, it wasn't covered by the manufacture warranty.  The frame was in great shape other than the dent on the lower part of the head tube.  A few minutes with the angle grinder and I had a "custom" shaved head tube, similar to what Sunday had tested on a few prototype frames that never ended up making it to production.  This was my first Sunday with a lower 11.5" bottom bracket and I really liked it.  I gave this bike the custom camo paint job in homage to the late 90's Standards that Rampage locals rocked in pure Standard Army fashion.

One of my favorite stories from this bike was one time during an after work session at House Park skatepark in downtown Austin, TX I happened to notice actor Giovanni Ribisi walking around checking out the park.  I guess he was there with some fellow Scientologist skate board pro who they were filming a documentary about.  I am not one to remember the name of any actor, usually just the names of characters they played int he movies.  I mentioned something to one of the guys I was riding with that the dude was over by the bowl  but I couldn't recall his name.  My buddy had to go check it out for himself and very NON-casually rode right past the dude eyeballing the crap out of him.  He gets like three pedals away from where the actor was standing and yells out in excitement "DUDE!!  IT'S PHOBEE'S BROTHER!"  Giovanni Ribisi has played so many different characters over the years, but never in my wildest dreams would I have thought my friend would have recognized him from his supporting role on the TV series Friends.  Instead of the typical "selfie with a celebrity" picture that I am sure dude gets way too much, I asked him if I could take a picture of him holding my bike.  I don't think he really knew how to react...haha!  Just another day at the skatepark, I guess...

More Bikes From skateparkrider (15 bikes in museum. View all)