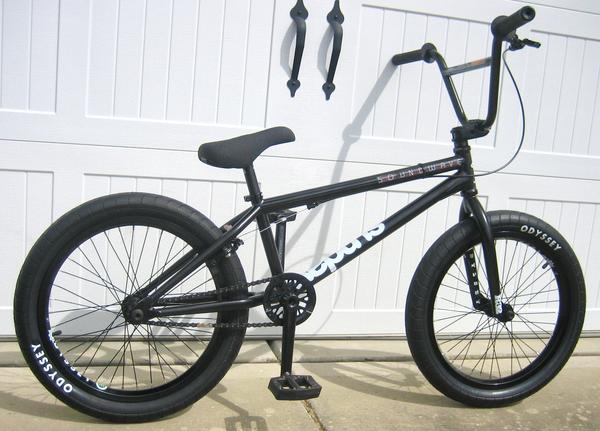 I wanted one of the 2013 Sunday Soundwave Specials when they were first released. I thought it looked like a spectacularly configured machine right out of the box and it would be great little brother to my Wave C. I never got the chance and before I knew it, they were long gone.

So....since I couldn't get a factory 2013 any longer and the 2014's were scaled even further back on parts selection (though still a great bike), I thought I would just build my own version. There were a few small parts I would have replaced on the boxed one anyway. This way, I could build it exactly the way I wanted. All top notch stuff from Odyssey and Sunday - my favorite.<

I think the bike turned out great. Lots of people slam on all black bikes, but I think they are stunning in their simplicity. It turned out to be SOLID and TIGHT. Even with the brakes, it makes ZERO noise when jumping and flying around. Amazing bike.

As always, thanks to Melton's Cycle Shop, where almost 100% of it was purchased. Lenny's deals allow me build stuff like this and enjoy it.

There are more pics in the comments section.

Thanks for stopping by!

More Bikes From RadicalNick (14 bikes in museum. View all)