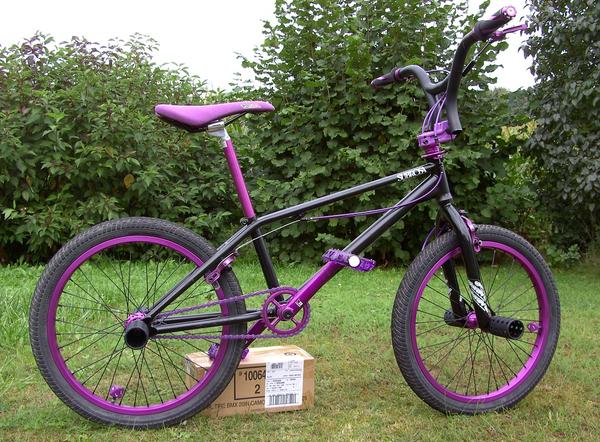 I'm a die-hard DTT fan at heart, and before I "got back into the game" last year, I'd have to say my Raleigh Ultra Shock was the favorite of all my bikes.  (Though the '89 chrome Schwinn Phantom with TW2's deserves an honorable mention).

I'd been kicking myself for missing out on buying a Pandora DTT when they were sold in 2010.  When this frame was announced, I knew I would be pre-ordering it.  I wasn't lucky enough to get in on the Aggro-Rag limited-edition, but to be honest, white/pink doesn't really work for me (I'd recommend Odyssey hot-pink accessories to anyone who is building one though).  2013 has blessed the BMX community with 3 companies offering DTT's; St. Martin TEN is a little too flatland-specific looking, Supercross' Extension isn't available in a short size like the Passion it's based on.  At 19", the FLATT is about perfect for what I wanted--I just wish Subrosa had made them in Party Splatter Yellow like it's brother the STREETT.

I knew purple was going to be my accent color from the get-go.  I'm a big fan of purple--as you can probably guess from my Eastern Ace of Spades build.  The Amber Reign wheelset was one of only a few pre-built sets that had purple hubs & rims that I'd wanted for it.  It's almost identical to it's stable-mate Ezra wheels, but even though EZRA had the female axles I'd wanted, the fronts weren't Chro-Mo.

I've swapped out the Drive Technologies fork for a Suelo zero-offset fork.  I've also swapped out the Black-Ops stem for a Drive Technologies stem.  The Fishbone Sushi bars I originally purchased from Dug6 here on the museum.  Khe Taira pegs have been substituted for the home-made ones I started with; they were purchased from MidSchool22, also here on the museum.  The front & lower rear brake cables, and the seat--were all purchased from daddy-o.  All the 2013 model Xposure parts were purchased from Evan's Cycles (Flight Crank, Mid Levers, You Brake).  I have these same Xposure parts from 2012 model year in neon yellow on my Ace of Spades.  (There are some differences, but the big ones are the style of the crank & the smaller barrel adjustors on the levers, which will now fit with a Snafu Dragonfly).  Also from Evan's Cycles were the Blank Bmx brake accessories kit (purple gyro tabs & purple barrel adjusters)...as well as the Vocal BMX Brake-Spares cable stop I replaced the London Mod with.  Odyssey Twisted pedals, KMC chain, Amber fork cap, Snafu Mobeus & Snafu gyro plate were all purchased from Flatlandfuel, where I'd pre-ordered the frame.  Sprocket, seatpost, stem, and grips were Ebay/Amazon random purchases.  Fork spacers were leftovers from a set I'd purchased off PorkchopBMX for my Ace of Spades.  Not sure if I want to keep white caps on the pedals, or swap out for the black ones....

More Bikes From IPD (3 bikes in museum. View all)