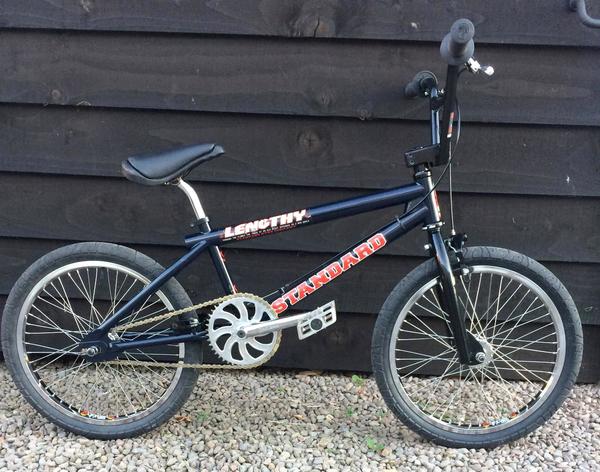 The frame is mint apart from a few scratches on the stickers, it's pretty strange removing the paint to allow headset and crank bearings to be fitted on a 1999 frame in 2018. I've tried to build it with Mid school parts only but had to cave-in on the headset and tyres The Standard Lengthy frame is NOS and had been in the back of the famous Backyard BMX warehouse for the last 19 years! - its a 1999 frame. It has a few scrapes,mainly on the stickers but is in good condition and to be honest that gives it a nice worn-in look. The forks are Standard Bash forks that have just been powder coated gloss black The bars are Primo Moe's Bars that have been powder coated and re-stickered (I got them through the BMX museum) The stem is a Standard front loader in black Headset is a FSA Pig DH PRO (new) Grips are ODI Mushrooms (new) Levers are Dia-compe MX99 (new) Hubs are NOS Poverty chrome sealed 48 hole,10mm front,14mm rear Rims are NOS Sun Big City Lite in chrome,laced with Araya stainless steel double-butted spokes and nipples Cranks are Profiles with Profile Whippit chainring 44T Pedals are Primo Tenderizors Chain is a gold KMC (new) Seat post is a KHE (I've been told) layback (new) Seat is a Primo Hemorrhoid (recovered) Seat post clamp is a NOS Standard SBC DESTROY Rear caliper is a NOS Odyssey Evolver Front caliper is an ACS BOA big-bolt (10mm) Tyres are Maxxis Hookworms

More Bikes From gavlocked (2 bikes in museum — View All)