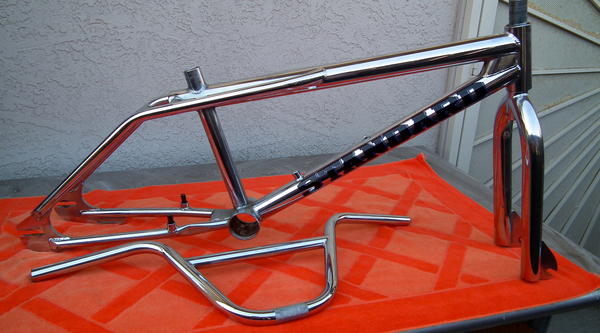 A great example of a early Standard

This is a Beautiful example of very early Waterford frame set. This is a 1993 Lengthy frame, fork & two piece Strip Bars in there original chrome finish and a matched set of parts that have been together since new. This sets original owner was a dirt jumper from Indiana so the bike has spent most of it`s life on the trails. The 93`s are a one year only frame & fork design and the two piece Strip Bars 93 only as well with the solid knurling pattern. Check out how thick the machined steerer tube is on the fork and the cable guide placed dead center on the inside of the fork leg, the steerer tube also sits much higher than a 94 and up fork. It`s great to see such a fantastic surviving piece of Standard Bykes history.