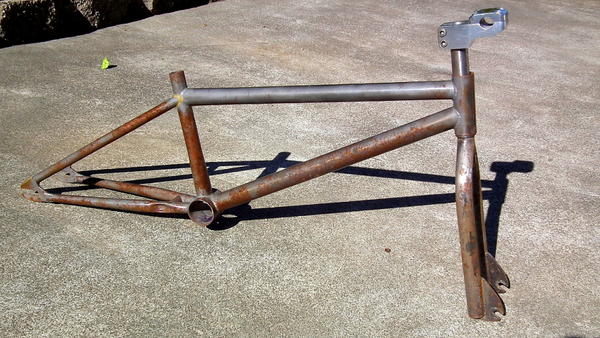 This is Standard Bicycle Motocross Prototype #001. This frame set was made by Waterford Cycles in 1993 for Rick Moliterno. This frame set is very special in many ways. This frame was years ahead of it`s time since it was the 1`st BMX frame to EVER run a 1 1/8" fork & stem. Another unique feature was that when Waterford Cycles made this frame they used left over tubing from the original Schwinn Sting frames from the 1980`s to build the rear triangle. The brake bridge was another interesting piece, prototype #001 was the only Standard frame ever to have a square brake bridge. The brake bridge was made from a solid piece of steel square stock and then hollowed out to make it lighter. This was alot of work for such a small piece it was just another example of Standards commitment to quality !!! These frames came as a kit when you bought them you got the frame, forks & stem. This frame set has it`s original curved bottom stem of which only a handful are known to still exist. This was Robbie Morales personal bike as he was the test rider. This bike was featured in many videos and magazine ads and it`s original color was Daytona Blue. At some point Rick Moliterno has this frame & fork stripped and cleared probably to check it for cracks and flaws after being test ridden. I have an original NOS set of 1st gen decals that go with this frame which gives me the option of restoring it back to it`s original Daytona Blue if I should decide to recreate Robbie`s old bike. I give Rick Moliterno a huge thanks for creating a BMX frame that changed BMX forever.