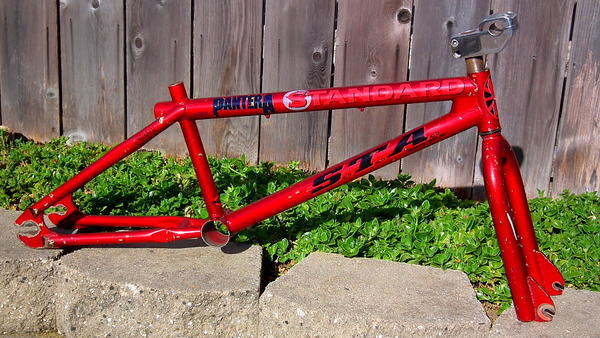 THE FIRST STANDARD S.T.A. EVER MADE

This ones pretty damn cool this is 1993 Standard S.T.A. Prototype #001 it`s the 1st S.T.A. ever built. It was ridden by Jeremy Verhulst in the Standard "Fat Ones" video. On most of the Standard prototype frames the ends of the tubing at the rear dropout were angle cut and left open identifying it as a prototype, this frame has no serial number. You can see Jeremy riding this bike in the "Fat Ones" video http://www.youtube.com/watch?v=-AcONG3Vljc starting at the 1:21 minute mark so damn cool !!!!!!!!!!
This bike is 100% original from 1993 and untouched

The color is a deep candy red just beautiful

The red fork is the correct prototype fork that was made with the frame & the stem is a very rare S.T.A. 1 1/8" stem. The Guy in the picture is Jeremy Verhulst taken in 1993.