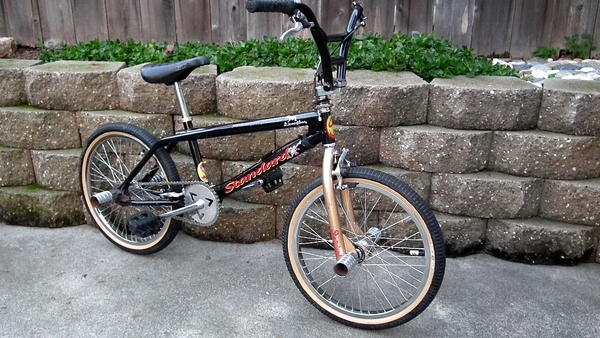 I took some pics of this bike after riding it today and enjoying the hell out of it. This is my wifes 1992 Standard Lengthy Gardner Built Prototype a very rare and very sweet early flatland bike. This bike tips the scales at around 46lbs and rides like a dream some of you may have seen the bike at Tony`s BMX Get Together in Martinez , Ca a few months back. The frame is a very rare all original paint and decals 1992 Standard Gardner Built Lengthy Prototype. This frame has the rare Standard "Spraycan Guy" decals I know of maybe a handful of frames in existence that have this decals and I own them. They are the coolest decals Standard made and were only used on the 1992 model frames which were given to factory team riders and pro riders, there were only about 200 of these Gardner Built frames made. This was the design that EVERYBODY tried to copy Hoffman came out with the Big Daddy in 93, S&M came out with the Heavy as frank in 94, ect,ect. This frame is also special due to the fact that it`s powder coated. You might think theres nothing special about powder coating a frame , but if you know anything about Standard you know that Standard did not powder coat frames for production bikes. When Standard tried thier hand at powder coating they could find anyone that could get it right at the time and in 1993 when production was being done by Waterford Cycles Waterford sprayed all of thier frames. This frame is one of less than a handful of frames in existence with a original powder coated finish. The forks on this bike are very very early gen forks in original Metallic Gold and were the last 1" threaded forks that Rick Moliterno used on his bike. The Stem is a early TNT stem that was also used on Rick Moliternos bike with a SBC decal of course. This is an awesome flatland bike to ride super solid and amazingly smooth. It`s loaded with Killer parts listed below check it out !!!!

More Bikes From suicidepan (59 bikes in museum — View All)