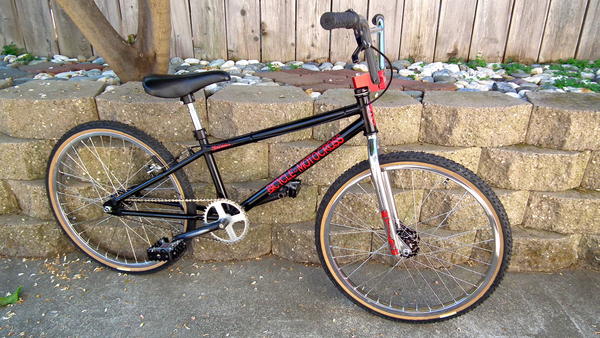 Factory rider Jamie Hixsons one off custom standard cruiser. This is currently the oldest known Standard cruiser and the only known 1" threaded cruiser.

This is my 1994 Standard 24"  cruiser it is the oldest known Standard cruiser known at this time. This cruiser is a custom one off build made for Standard factory team rider Jamie Hixson in 1994 . This cruiser is also the only known Standard cruiser that uses a 1" headset fork. Every part and finish on this bike is original unrestored .Jamie Hixson verified all the info in this letter below as well as a picture of him racing the cruiser back in the 90`s.

Yes the cruiser is a one off full custom just for me.i was on the first standard factory team until i was 17 or 18.was national age #1 at the age of 11 and top 5 every year after on both bikes. state #1 10X in a row, both bikes. u.s. open #1 back to back on cruiser and #1 and #2 on 20in. #9 in the world on 20in. i still have my 20in hanging in the garage, another full custom. havent touched it since the last time i raced it. if the scan came through the top left ( us 1) is the cruiser and the other two are the 20in. ask ronnie if he knows the guy behind me in the top right pic. that was the king pin series
finish was
jeff tapscott
jamie hixson
ron anderson
tom breznahan
kip rodier

hope this helps, i could sit here all day writing, but thats the big things,
later,
Hixson