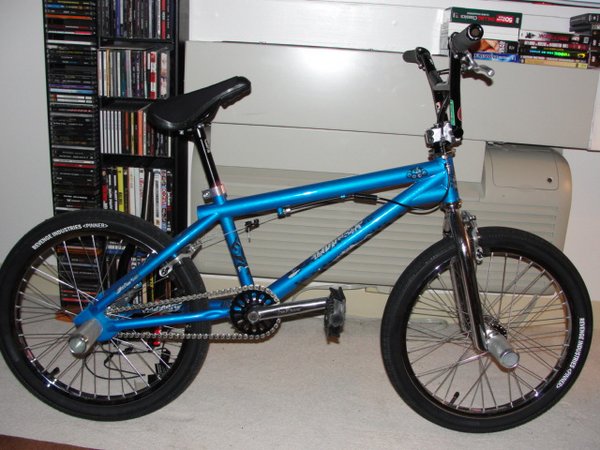 One of the greatest ideas Standard EVER had! A street/flatland bike. Thanks Bobby Fisher!

I bought this frame off a guy on Pedal BMX several years ago (I believe it was 2006). It had only been ridden a few times. I basically stuck it in my closet until this past year, when I decided I needed to either sell it and move on, or get this thing going. As you can see, I chose the latter. I made a trip back to Illinois, and during my stay, I knew that Standard was only like an hour and a half away from my hometown. I packed the frame up and long story short, made the trip to Standard.

I just want to take a moment to mention that Rick Moliterno is a great guy. I was invited to come up to Standard, personally him, and he showed me around the shop. I got to see my "Modern Shaman" in the process of being finished up (That was so cool to be able to see something that is going to be yours in its infancy). When we were done looking at how to go and build up a Standard, I asked him if they were up for making some modifications to my other Shaman frame. I asked for the brake mounts to be chopped off of the chain stays, as well as the cable guides being taken off of the down tube, and have new ones put under the top tube, and new brake stays put under the seat stays. I also asked for a coaster brake bracket for this frame. Within about a month and a half, my frame returned, and I took it to a local powder coater. Unfortunately, I can't read the serial number anymore because of the new paint. You can't even tell the chain stay brake mounts were ever there, as well as the down tube cable guides!

Being that we have much difficulty finding decals for Shamans, I chose to throw some 250S decals-after I chopped off the 250S part of the decal. I have to say, the bike has turned out pretty well. I'm still waiting for some custom Standard 4 piece Bullit bars, as well as a set of Bash forks I won on Ebay. For the time being, I have Odyssey Barrio bars on her and GT Pacman forks I had lying around. I can't wait for a day to take her out and giver her a spin!

Pedals: KHE Stimulatorz
Sprocket: Profile Imperial, 28 tooth
Chain: Shadow Conspiracy, chrome
Tires: Revenge Industries 20x1.75
Tubes: Animal
Rims: Araya 7x's 36 hole (yep, the old school ones)
Front hub: Suzue HIGH Flange 36 hole (nearly impossible to find!)
Rear hub: Suntour 36 hole coaster brake
Pegs: Hoffman Day Smith, tapered in the front, untapered in the rear
Modifications: Had a "slit" cut in the gyro tabs so that I could put cables on easier; rear hub had cog and coaster arms welded by Thick bikes of Pittsburgh, PA. Due to the dust cap getting the "weld" treatment, I had to go no cage for bearings, however, I've been told that once this breaks in, its AWESOME, as far as feeling super smooth;frame was modified by Standard.
-I can't wait for some snow to melt, as well as get a day off from work so that I can give her a whirl!

More Bikes From Red43j (2 bikes in museum. View all)