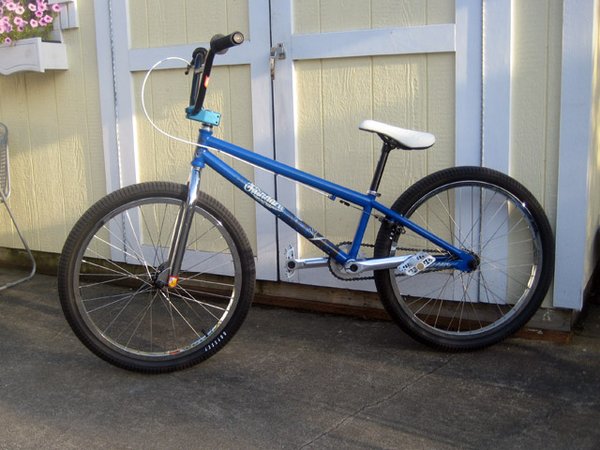 I wanted to build something that I would ride for years to come, and after riding 20s for years, then a 24 which I sold, and recently, a 26, I wanted to build a light but strong 24. Enter Standard Bykes and their recent move into offering custom built frames. Rick, Jess and the SBC crew really created something special for me, and I can't say enough about the build quality and ease of working with them. It was approx 5 weeks from the day I wrote Rick and spoke to Jess, to the day it was delivered. The welds and powder quality are excellent. So, here it is, my custom 2009 Standard 24" 250SC (C for Cruiser, of course). I wanted this to be a street machine that I can bash around without worry. It is built similar to the race cruiser specs, but with the 250S tubing (S is for Street), thus built to be ridden, hard. 22" top tube, integrated h/s, drilled for gyro tabs, mid bb and 990 seatstay mounts round out the specs. The blue powder color is loosely based on the Hutch candy blue - at least that's why I picked it - I wanted to create something similar to my TS that I had in 85 - including much of the blue/white/chrome color scheme. I found the chrome S&M forks on the 'Bay, and many of the other parts were items I had around, or got from friends here on the Museum. Other Standard parts include the older-style stem (i might have it powdered white) and the 30T Standard sprocket. A bunch of new Odyssey parts round out the build. Thanks to Trask at Revolution Cycles in Seattle for the wheel build. Also, thanks to Flatlandfuel.com for some killer deals and advice.

More Bikes From reverbtank (6 bikes in museum. View all)