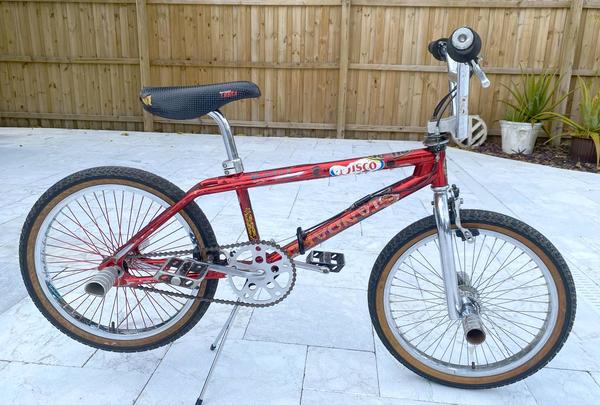 I’m friggin stoked to have this bike in my collection! I have known Chad for 20+ years and when this bike showed up at Spring Fling 2017, I flipped out! So much so, I purchased a Shorty frame and fork that day! Fast forward to the beginning of this year, Chad offered me the bike. The history on the bike is well documented through years of videos and magazines in the early mid 90’s. When he retired the bike (I think to ride for Schwinn), he sent the bike to his brother in Wisconsin because his brother wanted to ride with his son. The bike stayed in Wisconsin for years, until James Covington of Native Bikes convinced Chad to have it shipped back down to Florida. Chad brought the bike to the 2017 Spring Fling, then it has hung out in the Chattic above Mr. B’s. Chad set it up a little differently to send to his brother. He removed the freecoaster and installed the original Peregrine hub that came from the factory. He also put modern tires on it. During transit the box busted open and one of the aluminum Hand Grenade pegs was lost. So those were the first things I did. I sourced a SBC / Suntour hub and had James Covington lace it to Chads original rims and spokes. I had an orphan steel Hand Grenade laying around, so I stuck it on there. I also sourced era specific tires. Chad thinks he was either running Odyssey Barefoot tires, or Peregrine HP’s. I do recall seeing a photo of him riding these GT’s, so they will work for now.

More Bikes From justin__falco (4 bikes in museum. View all)