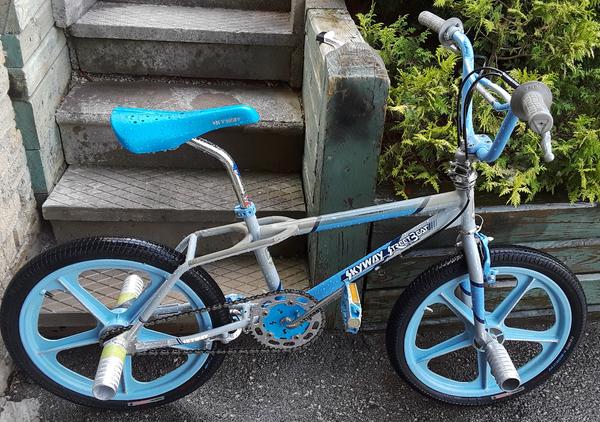 YES. I DO HAVE RIDEZ...AND CHECK OUT MY SKYWAY "S" SCAR!!! This BEAT and my matching STYLER were at RAD 25. HANDLEBARS ARE AUTOGRAPHED BY EDDIE FIOLA, MARTIN APARIJO, BILL ALLEN, and THE LEDGEND-HAL NEEDHAM+ OTHERS.

THIS BEAT IS ALL TRUE ORIGINAL, NOT RESTO'D!!!!! ORIGINAL PAINT/DECALS/PARTS. ONE OWNER SINCE NEW. ONLY UPGRATED TO PRIMO V-MONSTERS TO RIDE BLACK TIRES LIKE THE SKYWAY TEAM DID IN '87. THAT'S IT. THE WAY HE WAS BORN.

In 1986 I bought a copy of BMX PLUS BUYERS GUIDE (which I still have) and a few pages in was a double page ad with the new for '86 STREETBEATS AND STREETSTYLERS. You know the one.."SKYWAYS GONE WILD!, IN '86". Well I just lost my...you fill in the blank. My buddy Tom Price, at the time who got me into BMX FREESTYLE  had a green '86 HARO FST with white TUFFS. First real pro bike I ever rode. Love that bike. But when I started shopping around for my own and found that ad...it was BMX ADDITION AT FIRST SITE. This is where the story gets good..
..So, I'm like 10 and a half at the time. No job, No cash,NO BIKE. In a strange twist of fate, I had this a$ hale of a father who likes to make a regular fool outta me to get his rocks off right. So jack..azz, thinks he's smart, gonna save on cable/electricity and makes a bet with me. Not realizing, I've been hypnotized by SKYWAY MAGIC.
The bet is, six months-NO T.V. And he'll give me $300 bucks...
For a 10 and a half year old?, ya you're looking at next to impossible..so he thought too.
But, your humble narrator keeps looking at that shiney new, BLUE/GREY BEAT in the mag...and accepts the bet. Day after day..week after week, the a$ hale father keeps trying to break the kid. Sayin' things like, "Hey come watch this educational program. It's EDUCATIONAL so it doesn't count against the bet"
Ya right. I'm thinkin, "Whatya take me for jack? An idiot?"...He even tried setting me up at a friends birthday sleep over. He paid my buddies $10 each to tell him if I watched T.V. with them. Well, your humble narrator, didn't,..budge,.. an inch. Didn't fall for it.
So, the day arrived. SIX MONTHS TO THE DAY. NO FREAKIN T.V.!
SKYWAY PAYDAY!  Can I get a HELL YA!?
Ya'll should have seen the guys face...He tried to play it off like he forgot about the bet. Na. I took a page outta Jesse James hand book and thought, "PAY UP SUCKER". Course, I didn't say it. But a,.. I was thinkin' it.
So I collect $300 on the bet plus some cash I saved up cuttin' grass during the summer and start looking to order my BEAT. I go to Cycle Path, my local shop where I knew the guys, and tell them my order. They tried to sell me couple '85's that were sittin' on the floor too long, but I knew what I wanted. After couple of days, they're like "We can't order from SKYWAY cause we don't deal with them anymore".
My BMX future flashed before my young innocent eyes. But I didn't give up. I start shopping the mags for a mail order shop with the best price.
I finally find a place outta MO. Called, check this out..."STYLIN'".
Cheap, and willin' to order from the factory. I manage to get an o.k. from the mother to use her card to order. I speak to a way cool young guy who's super helpful and I tell him the story. I say I want a BLUE/GREY '86 SKYWAY STREETBEAT..LOADED FOR BEAR.. and the man places my order. I didn't realize it in my moment of giddiness, but I guess he felt for me. A few weeks which felt like an eternity passed, and the day came. I got a call from customs that said my package had cleared but needed UPS to handle and deliver it. It would mean a C.O.D. Agreed. I had enough. It would be there in the next couple days.
I'll never forget the moment my BEAST arrived. I was fresh on summer vacation. Hangin' out with school friends. When in the front bay window appeared a crap, brown truck. A lovely, crap brown UPS truck..
I literally went ape shit. My friends must have thought "the boys gone squirrely!" Cause they left shortly after. I couldn't handle it. So my friend that stayed gave the UPS driver the cash and helped me through it. Dudes.....what happened next was a total shock.
I get the brown SKYWAY box in the house and start carefully looking where to open the box without damaging anything. I open it...and start examining. The frame and forks are wrapped in white foam padding and corrugated cardboard. The bike requires some assembly. O.K.' no biggy. I pull out a nail polish bottle of SKYWAY BLUE touch up paint and say, "Ah f***'in cool! Touch up paint!" I continue investigating. What I found when I pulled the bike outta the box was NOT AN '86 STREETBEAT! Not at all.
FRIENDS...your humble narrator was beside himself. I notice the rear breaks. 990 set up. Lower frame..and in the words of Marty McFly I say, " HO-LY SHIT! It's an '87!!!!!
As I said, the really nice guy at STYLIN' must of felt for me..cause he put a special order in for me. Kinda COPO order for you Chevy guys(Central Office Production Order). He ordered me an '87, BLUE/GREY BEAT alright. But it was a TEAM ISSUED, FULLY LOADED BEAT. DIA-COMP 990'S/SPINMASTER II/ODYSSEY RX-3/SKYWAY VISCOUNT parts. All just released. Fresh out the paint shop.
I've had him ever since. The miles we've seen. I didn't pussyfoot, just learned to ride not to harm him. Took a bullet for him in 2003. Saved him, Ended up with a SKYWAY "S" scar on my right hand. NO JOKE. SEE PICTURE..Still have that BMX PLUS BUYER'S GUIDE preserved too. That's...dedication bro's.
And that's the story of my SKYWAY PAY DAY.
That's ma, story. And, I'm...stickin' to it.