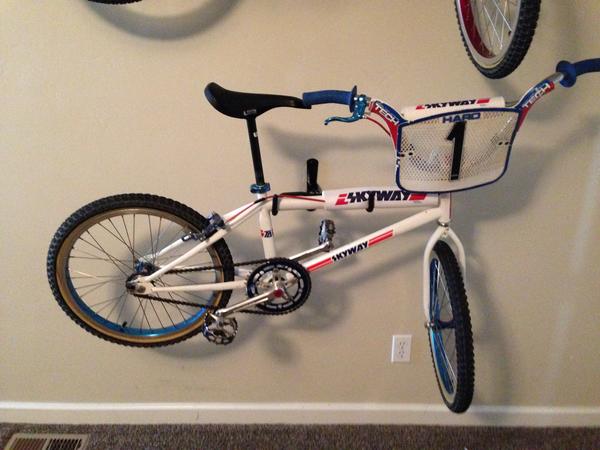 Original childhood rider.  Have had this bike since 1989.  I ended up with the skyway TA after I broke the frame of the bike before this.  I thought the frame I broke was a skyway but later found out it was a cycle pro bansai TA style.  I replaced the broken frame with this 1984 TA, what luck.  I don't know any of the history of the frame from 84 to 89.  I have done nothing to the paint and stickers since I've owned it except scratch it up of course!  All I can see is Skyway USA 6 84 0012.  In the last year while restoring this bike, I have replaced everything except the bottom bracket and handle bars.

This bike was stolen from me in 1990, police report filed immediately.  About a year later my mother randomly found it.  I had found a mountain bike at the bottom of a swimming hole and we turned it in to the police station.  After the waiting period, the police gave us the mountain bike.  While we were there picking it up, somehow, in the pile of all the bikes there, my mother recognized my Skyway TA and told them she thought it was mine.   They thought she was trying to scam them but after looking up the original police report of my stolen TA, they returned it to me (It really was my bike by the way)!
I ended up putting the bike in storage in 1995 knowing I would keep it forever.  I finally dug it out last year to bring it back to life......here she is!