Skull Skates began in April of 1978 in Regina, Saskatchewan, Canada. It’s founders were the Ducommun brothers (Rick- who has skateboarded since the mid sixties and Peter (P.D.)- who began skateboarding in 1972)
The original company was “Great North Country Skateboards” and used a black and white Yin and Yang symbol as it’s logo. Shortly after, the name was abbreviated to “G.N.C. Skates”. This is when P.D. designed the new logo known as Skull Skates. The original version of the logo included the letters “G.N.C” on the left side of the logo, however, skaters looked at the design and immediately called it “Skull Skates”. It was then that it was decided to drop the “G.N.C.” and go with Skull.
Sort: + Post new 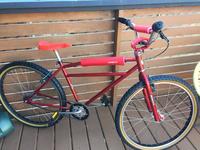