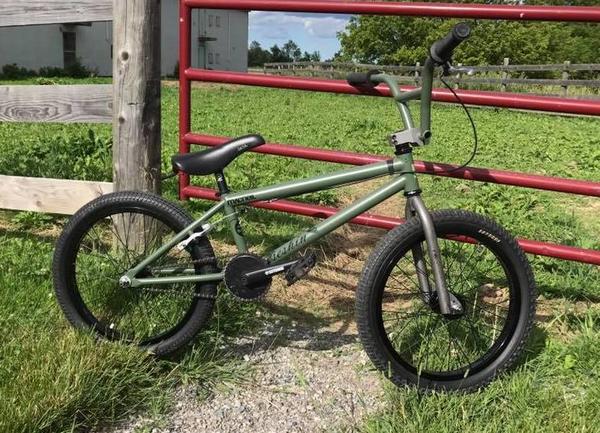 Detroit Dirt Bikes created at 'All-USA' made BMX a few years ago, which is still my favourite build and thread on this site. The attention to detail was second to none, and I loved how everybody that read the thread, chipped in some info, or another little-known company that was U.S. made. It got me thinking -- could I put together an all-Canuck scoot? But built the way I like 'em. Mid-school, post-tank era, clean, lean and ready to accept some abuse.

Sure, there was lots of old-school Canadian-made bike companies, but most disappeared around the time the sport crashed in 1989-90. I knew I was in for as hard a search as Detroit Dirt Bikes, and I also knew there were some items I'd have to strike from the list as unattainable.

Tires. There are no 20" tires made in Canada, by a Canadian manufacturer. There were Norco-branded tires back in the day, but not for a mid-schooler. There may have been some Michelin-branded 20" commuter-bike tires as well, but not befitting this build. 990's. Never heard of a Canadian-made U-brake (though if somebody has one, I'll take it!) Lever. (There might be a mountain bike lever out there that would work, but when I've got a Tech77 sitting on the bench, why not use the industry standard, and my favourite lever?

I also had to change my initial intention, which was Canadian-MADE, and settle for Canadian-BRAND. I could have gone the route of having every item custom made in Canada, but the idea was to use Canadian branded parts that I liked back in the day.

I'm calling this one done, but there may still be some changes made down the road (grips, that elusive Canadian-made U-brake?) Any additions or manufacturers not represented here, please add a comment with more Canadian BMX products and Brands!

Grips: ODI Longnecks (will be changing for Macneil or Krusher)

Clamp: something I had laying around...